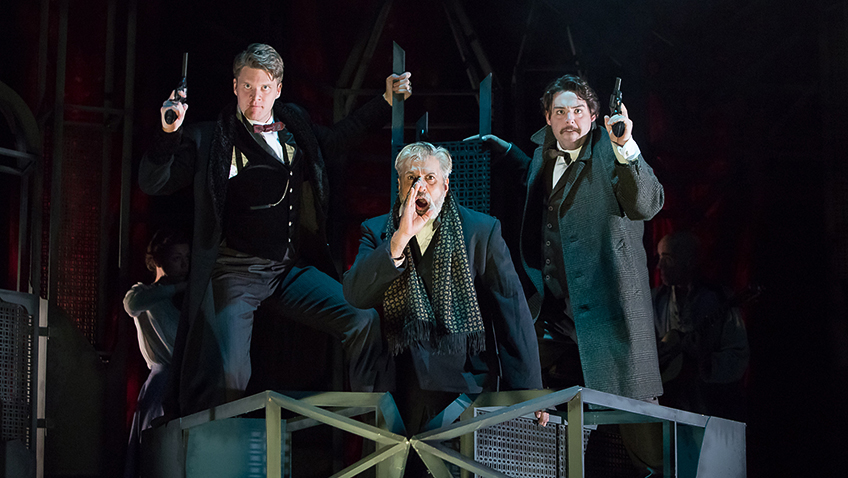 Bravo Nick Lane! Bravo The Blackeyed Theatre! This first production of the new stage adaptation of Conan Doyle’s second Sherlock Holmes novel, The Sign of Four, is a glorious triumph all round. The magic of a superbly crafted, well paced, flowing script is magnificently enhanced by beautiful set, lighting and costume, a multi-talented cast of six and an underscore of vibrant, live incidental music that is never intrusive or cliched.

Writer Nick Lane, who also directs, was first hooked by Holmes’ mystery crime adventures when watching Basil Rathbone films as a youngster, and his dedication to doing full justice to the author’s story-telling style whilst bringing in modern elements of stagecraft results in a wonderfully engaging thriller, filled with visual beauty and exciting, musical splendour. As in the books, Dr Watson is the main narrator of the case, complete with whimsical asides and insights to the audience. As in the books, the relationship of Holmes and Watson carries the story along, their portrayals in the traditional Victorian (and Jeremy Brett) style rather than the exaggerated, modern spoof incarnations of Cumberbatch and Freeman or Downey Jnr and Jude Law. These are Holmes and Watson and definitely not Sherlock and John! 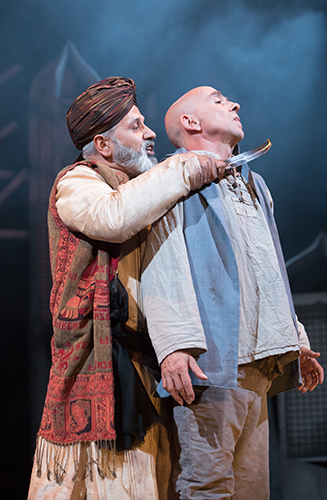 Christopher Glover and Zach Lee in Sherlock Holmes: The Sign of Four

The complex plot of stolen treasure, convicts, secret pacts, terrible betrayals and double crossings, all set to a backdrop of the 1857 Indian uprising against their Victorian colonisers (us) unfolds with unhurried clarity, enacted scenes bringing past happenings into the present. Taking in gentle humour and Watson’s shy, awkward, budding romance with future wife Mary along the way, the story is satisfyingly well-rounded from cocaine-injecting start to spotty dog finish.

Victoria Spearing’s lovely set is tasteful, artistic and perfectly, subtly lit. In subdued greys and browns with a rich backdrop of red, red drapes, tall, elegant frames – some domed pagoda shapes, others low, round structures – work with wooden latticework and tracery to evoke wonderfully the feel and mood of both Victorian England and Victorian India, while Naomi Gibbs’ period costumes blend in with fine beauty and simplicity. The ingenious versatility of the frames converts them deliciously into anything from tower or platform to hansom cab or chasing river boat with Emma Webb’s meticulous movement direction providing scintillating moments.

Great praise, too, to the cast of six, their masterly musical talents showcased no less than their multi-role acting abilities. Soothing sitar tones waft from offstage, while live performances onstage bring in trombone, tenor horn, sax, clarinet, flutes, guitar, accordion and xylophone, integrating Tristan Parkes’ music into the piece with admirable expertise and working to assist mood and momentum whilst adding elements of new interest and pleasure. 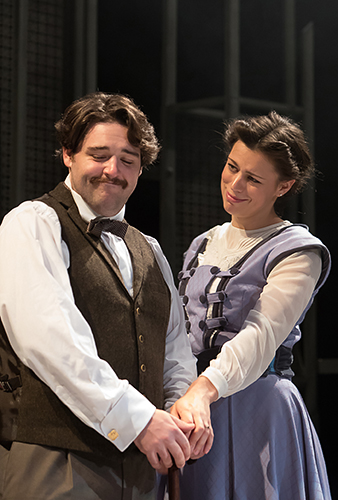 Joseph Derrington and Stephanie Rutherford in Sherlock Holmes: The Sign of Four

Pipeless and deerstalker-free, Luke Barton fully engages as the young, elegant Holmes, a man of cool, pedantic, objective logic and racing intellect, a man who reaches quickly for needle (and/or violin) when bored but springs to life once the game is afoot. Joseph Derrington is the cuddly, personable Watson with gammy leg, constantly exasperated by his friend, yet brimful with admiration. His narration and asides work wonderfully and he’s not at all the bumbling, baffled buffoon of some incarnations. His future wife, governess Mary Morstan, whose father has gone missing, is played (along with Mrs Hudson and Miss Smith) by Stephanie Rutherford. Earnest, modest Mary’s role is slightly meatier and a little less subservient than a traditional Victorian one, but subtly so. There’s a good deal of flamboyant theatricality in Ru Hamilton’s caricature of camp, privileged snob Thaddeus Sholto, toned down in playing Major Sholto, his own father, then turned into funny, feisty irascibility for his Sherman cameo. Christopher Glover beautifully covers all four Indian parts whilst turning all Londoner as plodding plod detective Athelney-Jones, while Zach Lee draws us in with engaging impact and immediacy as peg-leg Jonathan Small to take the plot further on its journey.

Broad, beaming smiles and enthusiastic applause attest to this being a singularly enjoyable and stylish entertainment.