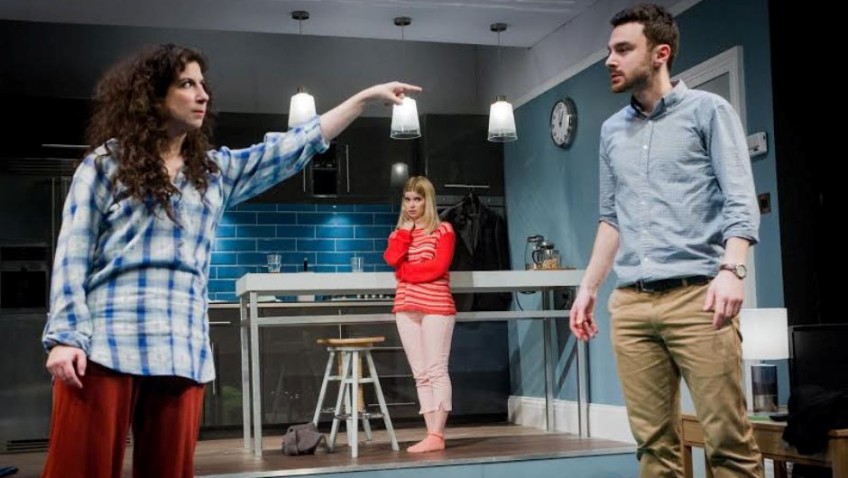 Only a Jewish playwright could write a play called Bad Jews.  Joshua Harmon’s comedy is both anti-Jewish and pro-Jewish at one and the same time and will appeal to Jewish and non-Jewish audiences.

Harmon has a wonderful acerbic wit. The 90-minute play has been extremely successful in America and deserves to repeat its success here. The British production, directed by Michael Longhurst, has an excellent cast.

The question is: to which member of the family should a priceless religious heirloom go? It belonged to their grandfather who had died in the Holocaust. His surviving son had hid it under his tongue for the two years he was in the concentration camp.

Daphna feels that, since she is the most Jewish member of the family, it is rightly hers. Her cousin Liam feels it is his because he had been promised it by his grandfather. Jonah (Joe Cohen), her brother, wants to stay out of their feud and volatile exchanges

Daphna, all bitter and twisted, is so Jewish, so Orthodox, so accusatory, so frizzy and resentful, that she is extremely unlikeable. Every time she opens her mouth (and she opens it all the time) Jenna Augen, who plays her, deliberately antagonizes everybody, including the audience.

Cousin Liam, a much more likeable character, nevertheless, has the most appalling rant, brilliantly written, when he rages against her, and Ilan Goodman delivers it so well that he wins a round of applause. Liam wants to marry a Gentile, another bone of contention.

His sweet girl friend (played by Gina Bramhill), who may not be as sweet as she seems, wins her round of applause when she sings a song from Porgy and Bess, which is hilariously excruciatingly embarrassing.

Bad Jews is recommended in the strongest terms. I do so hope it transfers to the West End.