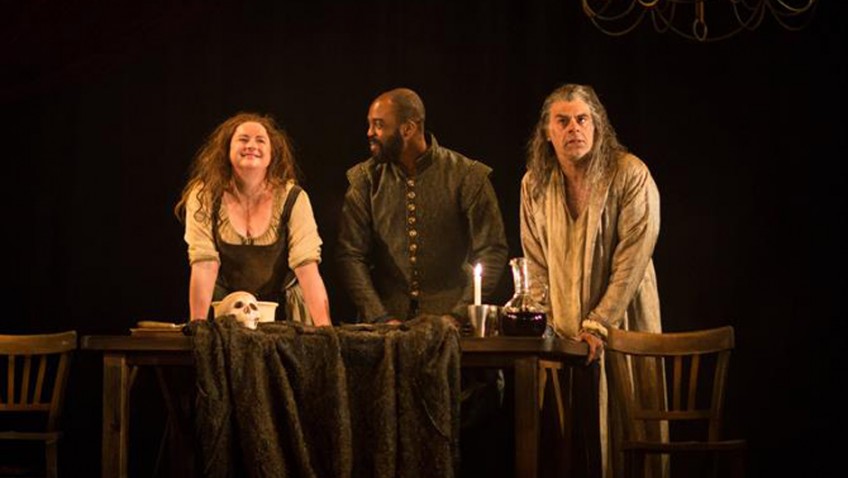 Con-men and their stings have always been good for box-office on stage and film. Ben Jonson’s Alchemist, always topical satire on avarice and lust and set in Jacobean London, is one of the most famous. The comedy is regularly revived but rarely well performed. A major problem is the language. Actors have been known to go out of their minds trying to learn their lines. So much of the dialogue is in slang, jargon, Latin and mumbo-jumbo.

Some references are so obscure they need a glossary. Stephen Jeffreys has cut the text by 20% to make it more accessible. The farce still leans heavily on the inventiveness and energy of the director and the cast.

The 1603 Plague, which left 30,000 dead, is still not yet fully over. One Londoner has retreated to the country and has left his house in the charge of his housekeeper, Jeremy.

Jeremy (a very likable performance by Ken Nwosu) has invited two confidence tricksters, Subtle (a raging Mark Lockyer) and Dol Common (Siobhan McSweeney) to join him in fleecing the public by promising to turn base metal into gold.

The dupers and the duped have the same obsessions, the same dreams and the same get-rich-quickly mentality. Jeremy and Subtle are childishly gleeful at the prospect of making a one-hundred mark killing.

Polly Findlay’s production for the RSC is set firmly in 1610, the year of the play’s premiere. A stuffed crocodile hangs above the stage and is used by the tricksters as a piggy-bank.

There is a galaxy of greedy, lustful and idiotically gullible victims. The most prominent is that grandiose sensualist, Sir Epicure Mammon, a great comic character, drooling over the thought of untold wealth and having sex with Dol.

Mammon has some wonderfully gourmet rich and absurdly voluptuous speeches. Ian Redford rolling about on the ground on his back, like a turtle unable to get up, is a comic sight to behold.

Tom McCall as Kastril, an extremely angry boy, gets his laughs from the farcical and peculiar way he walks and jumps around the stage.

Stephen Jeffreys has added a new epilogue, a reminder that theatre itself is a great con; and it is delivered with great charm by Ken Nwosu.