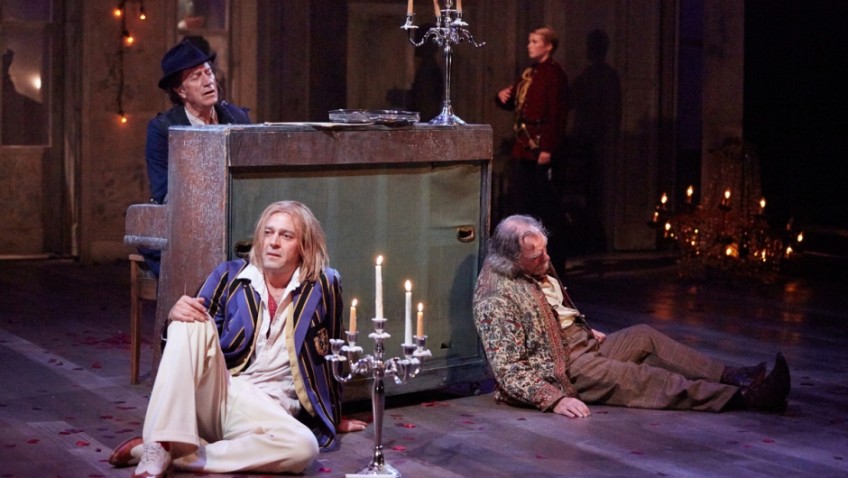 Come kiss me, sweet and twenty – Youth’s a stuff will not endure

Shakespeare’s bitter-sweet comedy is famous for its unrequited love and the heartbreak it brings. The characters are all victims of their romantic fantasies and trapped by their sexually ambiguous illusions.

The way that Jonathan Munby’s interesting production for English Touring Theatre begins and ends, with all the characters entering and exiting through windows, door and cupboard, seems to suggest that we are watching a dream in which Feste, the clown, perhaps remembers what had happened many years ago when the ship-wrecked Viola disguised herself as a boy, Cesario, and (this is an original touch) put Orsino’s courtiers’ noses severely out of joint when he transferred his affections to him

Certain scenes within the play proper are acted for fantasy. Sebastian, Viola’s identical twin brother, actually thinks he is dreaming. There is a fantastic moment when Rebecca Johnson’s Olivia realizes she is in love with Cesario and she opens the top of her dress and a stream of red rose petals pour from her heart.

At the very end there is confusion galore. Nobody is able to tell the difference between the twins with the result that Olivia drags off Cesario (thinking she is Sebastian) and Orsino (who is in love with Viola, follows them), leaving Sebastian all alone on the stage, wishing he had married his best friend, Antonio, and not Olivia……

One of the most popular comic scenes in all Shakespeare is when the Puritanical, stuffy, humourless Malvolio comes to court Olivia, the great lady of the House, whose servant he is. He arrives, all smiles, in yellow stocking and cross-gartered. It is so unlikely that even Shakespeare doesn’t believe it and has one of the characters (Fabian) say: “If this were played on a stage now, I could condemn it as an improbable fiction.”

Hugh Ross’s Malvolio goes even further and drops his trousers, which is even more unlikely. It is as if  Ross is frantically making up for the other great comic scene when he finds a letter, which leads him to believe Olivia is in love with him, and which he had acted so seriously there was barely a laugh in it.