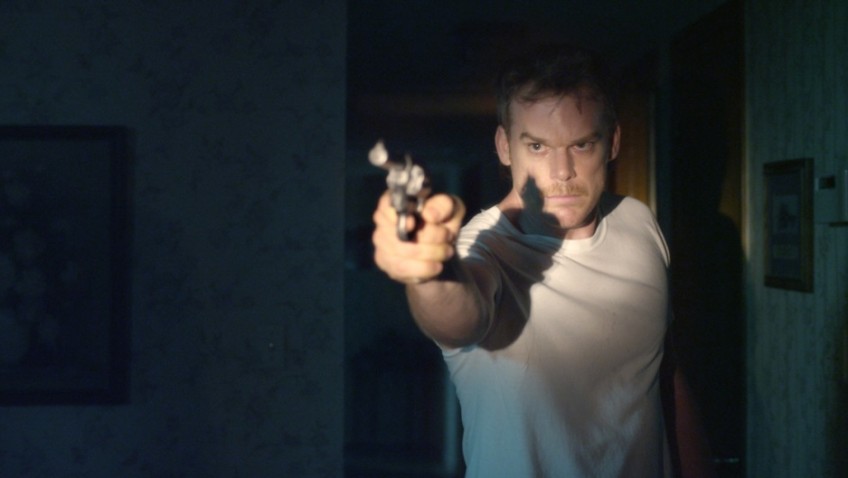 A chilling summer in Cold In July

Cold in July is a nifty Southern Gothic thriller, given an added boost by the welcome pairing of Pulitzer Prize-winning playwright and actor Sam Shephard (71) as an ex-con with a criminal son (Wyatt Russell) and Miami Vice’s Don Johnson (64) as a pig farmer who moonlights as a private detective. If the final quarter lacks the originality and surprises of the rest of the film, and the father/son theme is underwritten, Writer/Director Jim Mickle’s testosterone-charged thriller is the perfect way to stay cool this July.

It is 1989; a way of telling us to forget mobile phones and gun control debates for 110 minutes.  Picture framer Richard Dane (Michael C Hall, Kill Your Darlings, TV’s Dexter), is a hard-working, quiet, family man who lives in East Texas with his wife, Ann (Vinessa Shaw), and their young son.   When Ann awakens to a strange noise, Richard nervously fills his revolver with bullets and heads for the living room where he comes face-to-face with a masked intruder.  In a split second, he makes a decision that changes his life.  A shot is fired and the intruder’s blood splatters the wall and the sofa.

While Richard, who learns that the intruder was unarmed, suffers pangs of guilt, the community, treat him as an unlikely hero.  Police detective Price (Co-writer Nick Damici) cites the ‘fear of life’ defence and reassures Richard that it’s a simple case of an upstanding citizen against Freddy Russell, a known felon.

If Richard has nothing to fear from the law, he soon fears for his life and his family’s.  Freddy’s paroled father Ben (Shephard) starts hanging around the boy’s school and leaving menacing signs inside the Dane’s house.  Police protection proves ineffective and Richard is not entirely relieved when Price announces that they have picked up the culprit in Mexico.  By now, Richard has reason to question whether the dead man really is Freddy.

When Price will not return Richard’s calls, he drives to the police station in time to see a man being dragged into a police car.  He follows it to a railway junction, where, to his horror, he watches as Ben Russell is doused with alcohol and thrown, unconscious, across the tracks of an oncoming train.

Michael C. Hall is terrific as the mild-mannered, upstanding citizen who spends the entire film shell-shocked: first as a killer in self-defence, then as the police’s human bait and a stalker’s victim, and finally as a man forced to take the law into his own hands. Richard might be a family man and small business owner, but he has a strong moral code that prompts him to join forces with his stalker and Jim Bob (Johnson), a flamboyant private investigator as handy with a knife as he is with a shot gun.

So far in his career, the American Writer/Director Jim Mickle (writing with the actor Nick Damici) has done no wrong, going from strength to strength injecting popular genres with a pleasing blend of horror and psychological thriller.  From a group of survivors in an apartment block under siege from a rat invasion (Mulberry Street) to a dystopian road movie with zombie/vampires (Stake Land), to a study of religious fundamentalism and cannibalism (We Are What We Are) familiar territory is infused with metaphor, humour and originality.

In Cold in July, based on the novel by Joe R Lansdale, the horror element is more subdued, emerging only in the final scenes where the three unlikely allies encounter a gruesome world of violence and pornography.  It is here you wish that the father/son theme had been developed more throughout the film, if only to allow the tragic ending to resonate more in the context of the drama.

Mickle’s talent for building tension through camera moves and atmospheric scenes moves the film along, but the pace is never manic.  There are pauses for reflection and conversation so that characterization is never sacrificed to plot. While it might be a surprise for Dexter fans to see Hall acting against type, vulnerable, naive Richard is the perfect contrast to the grizzled lowlife pros who teach him lessons about being a man.