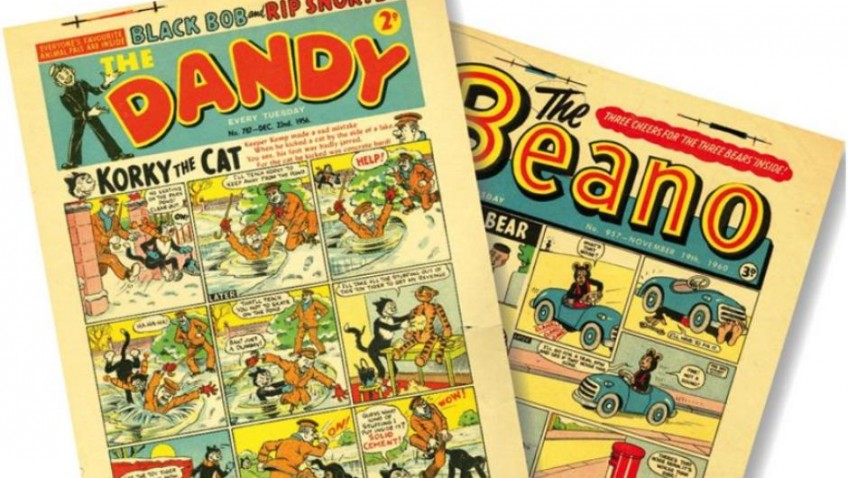 In 1890 the first weekly popular magazines were printed and consumed by an eager public. The Education Act of 1870 resulted in a working class who were now able to read and hungry for cheap reading matter.

Forty titles were launched that year and two of them ran until 1953, Comic Cuts and Illustrated Chips. By the early 1900s there were story magazines and newspapers for a similar price and the pictorial comics became identified with the barely literate in society.

One of the most prolific publishers of popular magazines is D. C. Thomson. The company launched its first comic, The Dandy, in 1937. The most notable difference between this and other comics of the day was the use of speech balloons instead of captions under the frame.

The Eagle was a seminal British periodical and introduced children, mainly boys, to Dan Dare, Swift Girl and Robin. it was edited by Marcus Morris, an Anglican vicar, who ensured there was a strong Christian element in the stories.

By the 1960s more comics appeared with separate titles for boys, girls and the under fives. I am sure most of us remember a childhood reading a much anticipated weekly issue of Tiger, Roy of the Rovers, or Bunty and Judy. For the little ones there was Jack and Jill, Playhour and Tiny Tots.

Many of the much loved characters have become entrenched in popular culture: Beryl the Peril and her plaits, Dennis in his striped jumper are still as recognisable as any celebrity.

I hope that the next generation finds the friendship that I felt with the Four Marys, or Mighty Mo from Bunty.

Children’s comics are a piece of social history and unlike television were usually enjoyed alone giving a child a sense of inclusion that so many of us still feel a bond with our favourites. What boy did not want to play for Melchester Rovers?

Do let me know your favourites and the comic book heroes from your childhood.