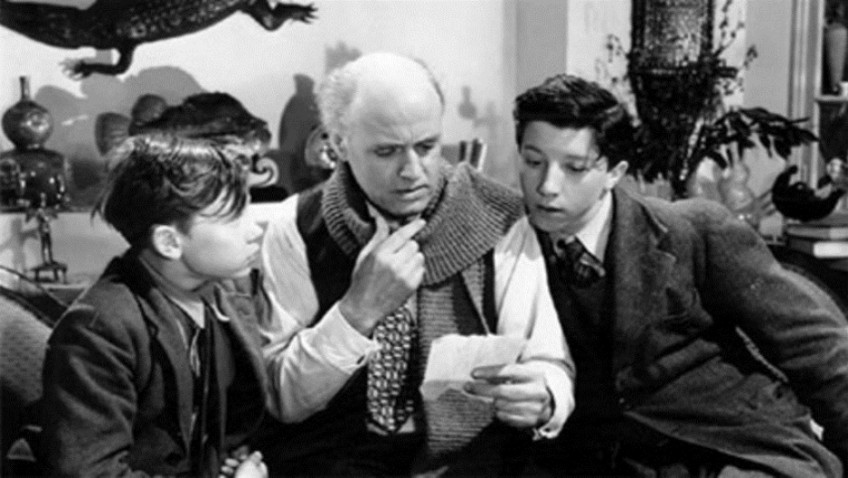 HUE AND CRY (StudioCanal). A boys’ big adventure story: criminals (who get their coded instructions through a kids’ comic) are tracked down by East End kids. T E B Clarke’s script clearly takes its inspiration from Gerhard Lemprett’s German film version of Erich Kastner’s Emil and the Detectives. Jack Warner (as a laughing villain) and Alistair Sim (as a cowardly writer) head the cast; but it is the hordes of rowdy kids (300 of them led by Harry Fowler) who are the real stars.

It was this film which kick-started what became a string of much-loved Ealing Studios comedy films. Directed by Charles Frend, it was shot in genuine locations and is an invaluable record of what post-war, bomb-damaged London looked like in 1946. The photography is by the great Douglas Slocombe. THE MAGNET (StudioCanal). 76-year-old James Fox is about to appear on the West End stage with his 29-year-old son. 65 years ago when he was ten and called William Fox he played an archetypal 1950s public schoolboy in a sweet Ealing Comedy in which he persuades a little boy to give him his magnet by pretending to give him an invisible watch in return.

He then feels terribly guilty and thinks the police are after him. The story is set in Merseyside, the director is Charles Frend and the script is once again by T E B Clark, who didn’t think much of it. The film begins well and it’s fine so long as it sticks with the boy but it gets bogged down in unfunny satire about bogus child psychology. Young Fox is extremely natural and convincing.