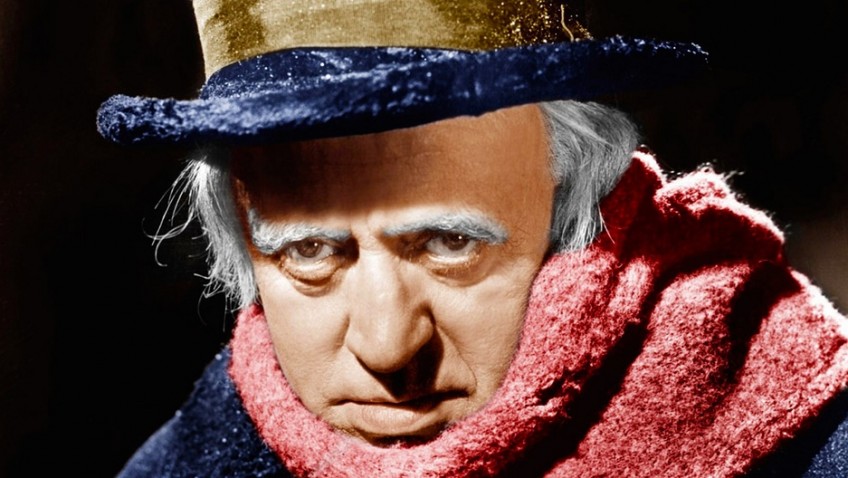 Alastair Sim is the definitive Scrooge

SCROOGE (Renown). There have been countless stage, film and television versions of Charles Dickens’ A Christmas Carol, ever since it was first published with huge success in 1843 at 5 shillings a copy. 6,000 copies were sold in the first few days. Within a year there were six unauthorised stage productions. The novel is both tract and ghost story. Dickens’s social and moral seriousness, heavy-handed though it may be, is still pertinent. At Dickens’s funeral in Westminster Abbey 1888 the Very Reverend Dean Stanley preached that the novel was the finest Christmas Sermon in the English language. My favourite version remains this one directed by Brian Desmond Hurst in 1951. Alastair Sim is the definitive Scrooge and Mervyn Johns is perfect casting for Cratchet. You have a choice of two versions. Watch it in black and white, it feels much more authentic than the colour version.

TWILIGHT’S LAST GLEAMING (Eureka). Richard Aldrich’s deeply pessimistic political thriller, filmed in 1977 but set in the immediate future (1981), did not get the critical praise and box office success it deserved on its release. It had a big conscience and was a plea for governments to be more open. Burt Lancaster is cast as a renegade idealist general who seizes a nuclear base and is ready to launch 9 nuclear weapons and destroy the world if the President of the USA does not make a speech apologising for the Vietnam War. Charles Durning as the President, Melvyn Doulas as his chief advisor and Gerald S O’Loughlin as his sidekick have the best dialogue. The President becomes the general’s hostage. The big question is the President expendable? Aldrich maintains the tension and pace with split screens.

NATIONAL TREASURE (Acorn). A television comedian is accused of having raped a 15-year-old girl 17 years earlier. The press give him and his family a bad time. The script takes its inspiration from Operation Yewtree, a witch-hunt following the Jimmy Saville scandal, in which people are immediately presumed to be guilty rather than to be innocent. The four part series, occasionally plodding, is at first a critique on the press and media, the naming of names and it then becomes a critique of the Law and the justice system in which the victims get a rough time in court. Robbie Coltraine has the weight and gravitas for the accused, who admits to being a womaniser but not a rapist. Julie Walters is the wife who chooses to believe him.

ELVIS & NIXON (Fox). It’s a film for television rather than the big screen. So a DVD suits it well. The meeting actually took place in 1970 but nobody knows what was said. Elvis Presley wanted to be a federal agent at large and have a badge and do his bit to stop kids taking drugs. Richard Nixon wanted Elvis’s photography and autograph for his daughter. Michael Shannon and Kevin Spacey are reasonably persuasive but nothing of dramatic interest really happens. It’s all very slight and not quite absurd enough. And Elvis doesn’t sing.

STELLA CADENTE (Second Run) is a Spanish art house movie by Lluis Minarro which may have a special appeal for lovers of melons and Puccini, King Amado of Spain (played by Alex Brendemuhl) reigned for just 26 months after his coronation in 1870. He is a puppet king for a corrupt government and locked up in castle. “Nobody wants you,” says the Archbishop. Keen on democracy and freedom, Amado would like to be a modern parliamentary monarch and provide a better life for his citizens but he hasn’t the strength and the courage to act. He has nothing to do all day but look forward to either abdication or assassination. Audiences, who wait for something dramatic to happen, will wait in vain.

TWO WOMEN (CultFilms). 1960 Vittorio de Sici’s film is set in Italy in 1943 during World War 2 following the execution of Mussolini. A mother (Sophia Loren) decides that she and her 13-year-old daughter should go to a mountain village in order to escape the bombing in Rome. They are gang-raped by Allied Moroccan soldiers. De Sici’s name may raise expectations too high. Loren won an Academy Award for Best Actress, the first given to a non-American in a foreign film. Anna Magnani was initially going to play the mother and Loren the daughter; but Magnani turned it down not wanting to play Loren’s mother!

THE VON TRAPP FAMILY A LIFE OF MUSIC (Lionsgate). The hills are no longer alive with the sound of music. It is strange to see the Von Trapp family without Julie Andrews and the children singing Do Re Mi. If you have seen The Sound of Music (how many times on stage and film already?) you may feel you don’t really want to see this plodding version. The eldest daughter Agathe deeply resents her widowed dad marrying the nanny. Rosemary Harris plays Agathe in old age. Eliza Bennnet plays her younger self. The sub-title is somewhat odd since there is very little music.