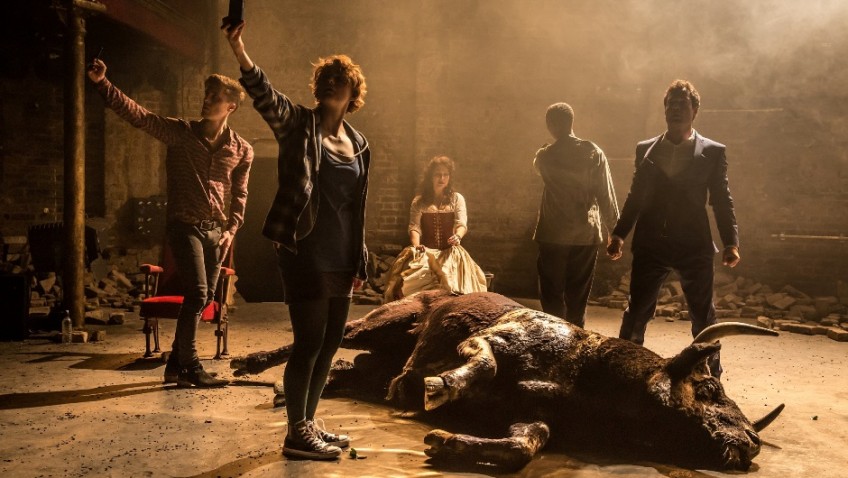 Simon Stephens’s play was commissioned and first performed in Hamburg in 2014.  Stephens says Carmen Disruption is “about the possibility of contact.” His designer, Lizzie Clachan, says, “It’s about the last gasps of a crumbling Europe.”

Bizet’s opera provides a frame for the contemporary world.  It’s a world of strangers in cities which are so anonymous they could be any city.

Everybody is consumed by consumerism and addicted to technology, Twitter and Facebook. People are living lonely and disconnected lives.

The Almeida, with its bare brick walls and decorated balconies, provides an atmospheric setting.

The script, fractured and non-naturalistic, is a series of monologues, constantly shifting from one character to another, plus the occasional burst of song.

The characters include an opera singer (Sharon Small), a rent boy (Jack Farthing), a banker (John Light), a cab driver (Noma Dumezweni) and a student (Katie West) in love with her teacher.

There is also mezzo-soprano Viktoria Vizin (the embodiment of Bizet’s Carmen), two cellists and a dying bull on stage.

The opera singer finds it difficult to draw the line between herself and the role (Carmen) she has sung so often in so many soulless cities all over the world. She only becomes alive when she is Carmen.

She looks around her and all the other characters seem to have stepped out of Bizet’s opera. The vain, crude, strutting rent boy is a modern Carmen. The dishonest banker losing millions is a modern Escamillo.

Stephens’ deeply pessimistic play and Michael Longhurst’s poetic production are fascinating and irritating in equal measure. You want it to work because it has such potential but its various elements do not always come together satisfactorily.