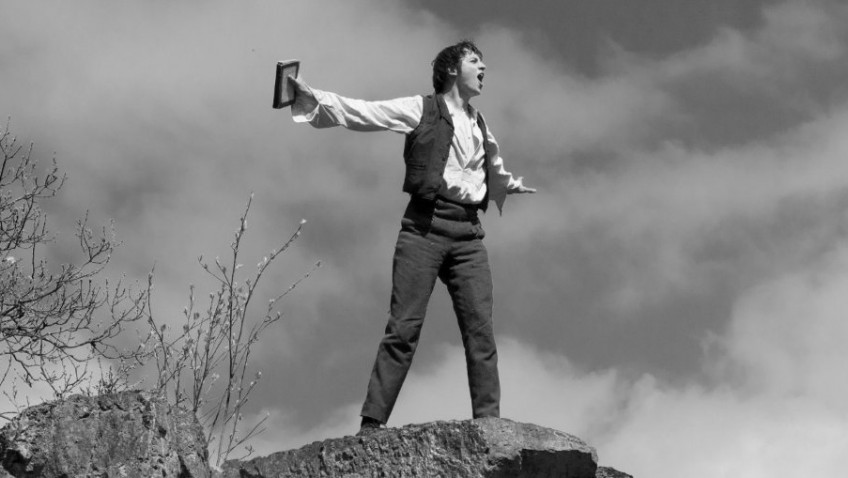 Home from Home – Chronicle of a Vision is a work of such humanity, beauty, depth and power that it can only be called a masterpiece.  This four-hour epic about a Prussian farming community caught up in the wave of mass European emigration in the 1840s is the latest work of 82-year-old Edgar Reitz.

Like Reitz’s best known work, the monumental television series Heimat (Homeland), Home from Home is also about how a place shapes a person; only here the drive to be transformed by a distant land and to stake claim to that land is the dominant theme. A more explicit title for the film might have been The Pain of Departure, because throughout this drama of intertwined lives we see families in horse-drawn wagons take their leave of friends and relatives whom they will never see again.

While most of the inhabitants of the Hunsrück region emigrate to escape poverty, hunger, sickness and the oppression of the local baron, departures are often tinged with guilt, desperation and fear.  For Jakob (Jan Dieter Schneider), the New World is an obsession.  He has been preparing for his departure since he was taught to read. Jakob might have been a beneficiary of the new compulsory education introduced in Prussia in 1815, but, now in his late teens, he is teaching himself English, Spanish and an indigenous Indian dialect.  It is Jakob’s chronicle that figures in the title. He is writing a journal of his vision of his future that ends in around 1844 when fate dictates another direction for his life.

In the middle of an endless wind-swept field where Jakob and his mother Margarethe (Marita Breuer) are working, she observes, ‘There’s something in your eyes, Jakob. I don’t know where it comes from.’  Jakob attributes his dreaminess to the books he’s been reading, but she recognises his vision.

Jakob, along with his Puritanical blacksmith father Johann (Rudiger Kriese), his hard-working, sympathetic mother and his older brother, Gustav (Maximilian Scheidt), recently back from military service, live together with a grandmother and kindly uncle in a small farmhouse in the fictional village of Schabbach.   Jakob’s older sister Lena (Mélanie Fouché) has married a Catholic with whom she had a child and Johann has disowned her.

When Jakob sees the spirited, pretty farm girl Jettchen (Antonia Bill) rolling down a hill naked with her best friend Florinchen (Philine Lembeck), the reserved, scholarly teenager is smitten.  In breaks from farm work, he talks to Jettchen about his dreams, teaches her Indian phrases and confesses to her that he is planning to emigrate very soon.  Though Jakob assumes that Jettchen will accompany him to the new world, his more level-headed and industrious – he is building the village’s first steam engine –  brother Gustav, who had always been paired with the singer and musician, Florinchen, proves to be a rival.

Then one night at a traditional village festival, a revolt against the Baron’s exclusive right to sell the wine (an ‘ancient privilege’) breaks out.  Jakob, who starts drinking after seeing Gustav dance with Jettchen, becomes involved in the melee, and is thrown into prison.   When he gets us, he is greeted with devastating news.  His grandmother tells him, ‘everything in it’s time and you are too late.’

Home from Home could be considered a kind of prequel to Reitz’s Heimat, although the focus is on a place we only imagine with Jakob and hear about when a letter is read at the end.  While researching the film, Reitz discovered that he had ancestors who went to Brazil from Hunsrück.  His late brother, a scholar and linguist, was the model for Jakob.   Reitz mergers fiction and non-fiction in other ways, too, evoking the burgeoning industrial revolution with Gustav’s rudimentary steam engine and the age of exploration with a visit from the botanical geographer Alexander von Humboldt (a surprise cameo from Werner Herzog!) whose knowledge was not derived from books, like Jakob’s, but from travel and direct observation

Reitz gives us such a real sense of place that a fascinating contrast is created in our minds between the roots that tie Schabbach’s farmers to the village and the magnetic force luring them away. All of the interiors and the facades of the village were built near an existing village by the meticulous Production Designer Toni Gerg, who died just as production began, and Reitz gives us the time to fall into the rhythms of the seasons and the pace of life that is so different from ours today.  This is all enhanced by the astonishingly beautiful cinemascope monochrome cinematography, in which some colour is occasionally inserted digitally for effect.

Across the rich array of differentiated characters, the acting is close to perfection. But this is Jakob Simon’s story, and the search for the right type of character – a boy who was not only naïve dreamer and scholar but, who could inhabit a historic period with conviction –  was a challenge. After extensive auditions, Jan Dieter Schneider showed up, a medical student who dabbled in amateur dramatics.

Reitz is not only telling a story of historic significance, of course, but a universal one that resonates today.  In the film we listen to a letter from loved ones who have made the perilous ocean crossing, and are reminded of the refugees today who risk their lives in equally great numbers a new world.