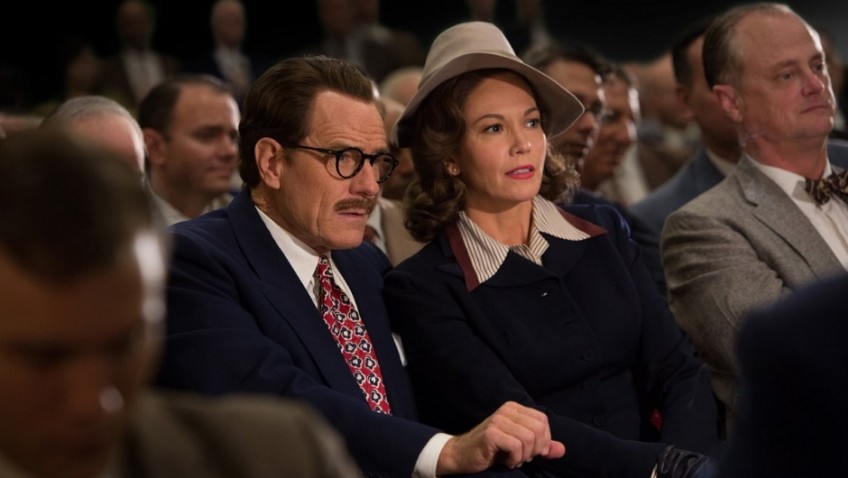 Although by 1943 Dalton Trumbo was wealthy, and one of the highest paid scriptwriters in Hollywood, like many US citizens who witnessed the rise of Fascism in Europe, he joined the US Communist Party. He also joined Bogart and Bacall in supporting the various film studio unions.  For this choice, and his refusal to ‘name names’ at the House Un-American Activities Committee, he became one of the Hollywood Ten and was blacklisted along with some of the greatest writers of the period.

Director Jay Roach’s Trumbo focuses on the writer’s traumatic life during the blacklisting years (1946-1960), painting a fascinating portrait of the period with its paranoia and witch-hunts, spurred on by people like Hedda Hopper (Helen Mirren).   John McNamara’s script has a tendency to set up the delivery of a witticism, joke or mini-message and Roach, known for his Austin Powers comedies, indulges in a few cartoony scenes.  But on the whole they get the balance between levity and anger just right, delivering an entertaining and uplifting biopic that may surprise and enlighten many viewers.

On Main Street in Grand Junction, Colorado, there is a bronze statue of the 62-year-old double Academy Award-winning scriptwriter sitting in a bathtub surrounded by the tools of his trade. A coffee mug on the rim, a cigarette in one hand and pen in the other, Trumbo gazes far beyond the paper on a stand straddling the tub. If it took a documentary by Trumbo’s son, Christopher, and 30 years from the death of the town’s most illustrious resident to commemorate him, it is because Trumbo offended the townsfolk with his 1935 book Eclipse.

Trumbo (Bryan Cranston) annoys, bullies and angers a lot of people in Roach’s biopic, including his long suffering, but astutely diplomatic wife (Diane Lane) and fellow Communist Party member and script writer Arlen Hird (Louis C.K.), one of two composite characters in the film (the other being Buddy Rich).  In one scene his eldest daughter Nikola (Elle Fanning) interrupts Trumbo’s bathtub writing with an invitation to join her 16th birthday celebration in the living room.   Oblivious to her birthday, or feelings, he chastises her for breaking the house rule:  not to disturb the bread winner.

In the film, Arlen Hird represents those artists who disagree with Trumbo’s strategy for surviving the blacklisting. This was to earn a living from writing because that is precisely what the Republications want to stop. Hird tries to insert noble characters and socialist message in the scripts that King rejects. ‘Don’t pretend that getting your career back is part of some big crusade,’ Hird reproaches Trumbo who is doctoring dozens of scripts, like ‘The Alien and the Farm Girl’ for B-movie producer Frank King (John Goodman) to make ends meet.  Hird does not believe that Trumbo would sacrifice his ranch and wealth for his principles, and when Trumbo does, the two argue about whether Trumbo really wants to change things, or just to win.

Trumbo did win. But as the film which gave him his first Academy Award, however, was credited to writer Ian McLellan Hunter (AlanTudyk) and his second was written under the pseudonym Robert Rich, these triumphs were frustrating.

They were equally frustrating, however, for the film’s arch villain, Hedda Hopper (an excellent Helen Mirren) actress-turned-gossip-columnist who, along with John Wayne (David James Elliott), head of Motion Picture Alliance for the Preservation of American Ideals; and Ronald Reagan of the Screen Actors Guild, made it her mission to put Hollywood’s Communist writers out of business.  About Hopper and Wayne, Trumbo says, ‘they’re Nazis; they’re just too cheap to buy the uniforms’.

In a truly frightening scene, she pays a visit to Louis B Mayer (Richard Portnow) who had a three year deal with Trumbo.  When Mayer rejects her blackmail (she has ‘65 million readers’), she turns increasingly nasty, finishing with, ‘that’s exactly what my readers expect from studios run by Kikes.’  Mayer orders her out, but he did succumb to the pressure and supported the blacklist. Later, Hopper is furious at rumours that her nemesis was behind two Oscar nominated/winning scripts, but those who knew the writer’s identity were not going to share it with Hopper.

Edward G Robinson (Mark Stuhlbarg) sold some of his art collection to finance the Hollywood Ten’s legal defence, but he represents the actor who reluctantly bows to pressure to name names in order to work.  A new moral dilemma comes up when Robinson explains to Trumbo that while a writer can still earn money writing under a pseudonym, an actor is his recognisable face.   Robinson hadn’t worked for a year when he reluctantly named names.

Trumbo was indeed working, but to exhaustion as he was earning a fraction of his normal fee.  He also found jobs at King Brother Productions for other blacklisted writers, and if their scripts were not to King’s liking, Trumbo himself would rewrite them.  The scenes involving Trumbo’s production line system (his children had to remember to answer each of his five telephones with a different alias) and Frank King’s defiant disregard for the establishment are some of the best in the film.

To a journalist threatening to expose his work with blacklisted writers, King (chasing the hapless man from the office) shouts: ‘You want to put me in the paper? Go, ahead. None of the people who go to see my movies can read!’ When Trumbo delivers to King the original script, The Brave One’, it represents a step up for King, particularly when the script wins the Academy Award.

The most uplifting part of the film is when Kirk Douglas (Dean O’Gorman), a star too big even for Hopper, and Otto Preminger (Christian Berkel), both first generation Americans from Jewish immigrant parents, commission Trumbo to work on Spartacus and Exodus respectively.  These films were so high profile, that if Trumbo’s name were attached, it would herald the beginning of the end of the Blacklist period.

It is only a shame that the filmmakers departed from the well-known fact that when Trumbo sold his ranch the family spent ten years in Mexico City, hence the Mexican setting and protagonist for his 1956 film, The Brave One.  This exile made their lives – and Trumbo’s work – even more difficult.  In the film, the family downsize to a huge suburban LA house with a nasty Republican neighbour who pollutes their pool.

Cranston, best known now for his role in the series, Breaking Bad, is in every scene, and gives a monumental and nuanced performance as the fiercely intelligent but headstrong and driven writer, who loves his family, even if he seems to love his work more. When, at the end of the film, he delivers his conciliatory speech (excerpts from his real speech) with tears in his eyes, you might find yourself shedding one, too.  Cranston has been nominated for a Best Actor Academy Award for this performance.