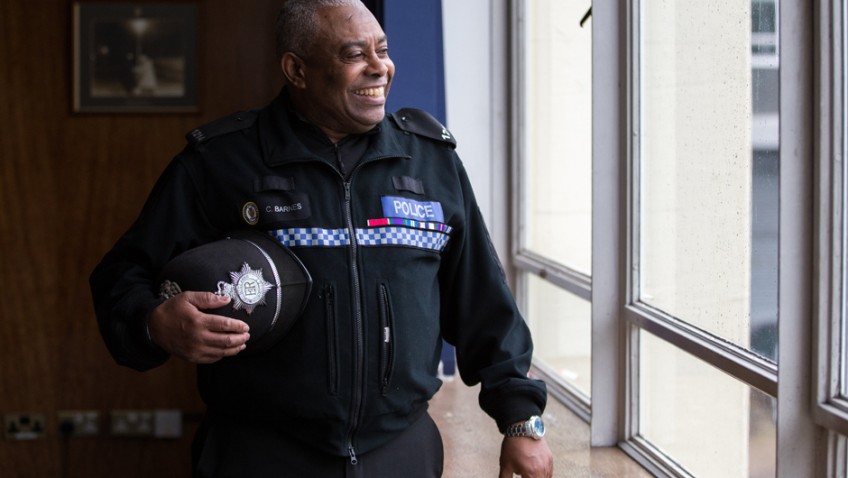 Britain’s oldest bobby is finally hanging up his truncheon after still pounding the beat and catching crooks – aged 66.

Cornell Barnes – who is known as Barney – has been a police constable since he joined West Midlands Police at the age of 41 in 1990.

He has become a popular figure in the Hillfields area of Coventry, West Mids., after spending almost three decades working to keep the neighbourhood safe.

The granddad-of-two has helped put hundreds of criminals behind bars, arresting an average of 50 each year – around 1,300 in his career.

And he has covered a staggering estimated 50,000 MILES on foot patrol during his 26 years working for the force. Barney even received a MBE for his dedication to neighbourhood policing in 2008 and earned himself the unofficial title of the “Sheriff of Hillfields” among local residents.

But the well-liked bobby is finally hanging up his handcuffs after he officially retired from the force last Tuesday (31/5).

Yesterday (5/06) Barney, from Coventry, said: “I have enjoyed the diversity of the role and being able to make a difference.

“There is nothing nicer than seeing an appreciative smile.

“I feel proud of what I have achieved and being awarded the MBE was an unbelievable moment.

“In the early days I used to everything on foot but as you get older and wiser I used to use the car and drive to certain areas then walk around.

“I still used to go through three pairs of good shoes every year though.

“I will miss the camaraderie of the role, the people and my area of Hillfields.

“My overriding emotion is I can hold my head up high and say I did what I could to improve lives and didn’t let people down.”

Jamaican-born Barney moved to England when he was aged 10 and joined the British Army at the age of just 15 in 1965.

He then spent 25 years serving around the world as an infantry soldier with the Yorkshire Regiment, including eight tours of Northern Ireland, before joining West Midlands Police in 1990. The dad-of-four said he decided to become a beat officer to make a difference by reforming troubled teens and improving the relationship between youngsters and the police.

But he is worried about the impact Government cuts will have on policing in the local communities.

Barney added: “These days the way the cuts are coming in we are having to concentrate on putting fires out.

“If you’re not there on the ground with the local people you will not have the information.

“You have got to know people intimately.

“If it hadn’t been for what happened in France I strongly believe we would have lost neighbourhood policing by now.

“We certainly would have lost the PCSOs who are our eyes and ears. It is worrying for the future.”

Barney’s love of music saw him become musical director of the highly-regarded West Midlands Police Brass Band in 1999 – a role which he will continue after his retirement.

Incredibly, one of the most memorable arrests he was involved in came during one of the band’s performances at a shopping centre in Birmingham.

Barney said: “We were playing and I was conducting the band and this chap jumped down onto the square where we were.

“He was being chased by a bobby who came after him but luckily some of the band dropped their instruments and arrested him.

“I just made sure the others kept playing so there was some background noise, it proves you’re never off duty.

“One arrest that stands out is a drug dealer who used to tell women they owed him £20,000 and then he would take money from their social security books.

“One girl came to me and said she had a special book for her disabled son and he had found it and was taken her money from that too.

“We set up a trap for him by giving marked money to the Post Office so when she turned up to collect her money and he took the book off her we did a sting and piled on him.

“He had three big minders with him but they got some too, it was really good.

“I still see that lady now and she never forgets.

“It’s nice when you get that kind of feedback.”

Barney, who has recently undergone a knee operation, will be the guest of honour at a celebration to mark his time with West Midlands Police later this month.

He plans to enjoy his retirement spending the extra time with his family and enjoying some of his hobbies.

He added: “I am looking forward to retirement but I aim to carry on with the band for quite a while yet. It is really enjoyable and we do play a lot for good causes.

“It has been a pleasure to be associated with the force and the community for all these years.”