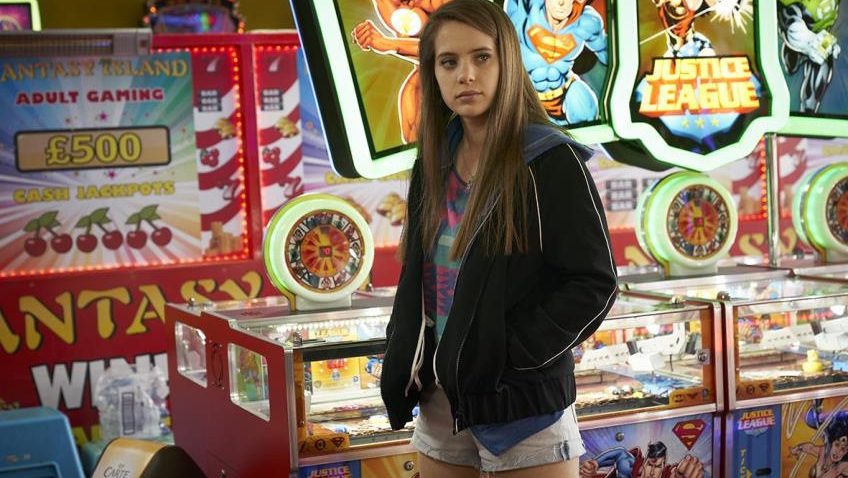 There have been many movies about women suffering from eating disorders made in the past 25 years, but almost all of them are American made-for-TV movies or documentaries. Lucy Brydon’s feature film debut as writer-director is a low budget cinema film (co-funded by the BFI and BBC) that carries a big punch. What distinguishes Brydon’s protagonist is that she is not a pre-pubescent girl or even a teenager. Stephanie (Siân Brooke, known from Doctor Foster and Sherlock Holmes) is in her late thirties and has a troubled, 15-year-old daughter, Pearl (Fabienne Piolini Castle), resentful of her mother’s self-destructive behaviour and of her absences. Like Ambition, motherhood should be made of sterner stuff.

Brydon wants to emphasise that eating disorders do not suddenly disappear with maturity. Anorexia is a singular disease because the patient, with a warped mental image of her/himself is more afraid of getting better than of dying. Though Stephanie is out of a rehab treatment centre with a renewed sense of purpose, Brydon maintains a steady level of tension. Is it going to work this time, or is she on a slow journey to suicide by malnutrition and organ failure?

Stephanie, a painfully thin woman with a pretty, if drawn face, and short, white stylish hair walks out of a rehab centre where she is greeted by her mother, Susan (Amanda Burton) like a prisoner leaving prison for a stable force to keep her on the straight and narrow. The daunting task before Stephanie is to reintegrate into society and, more immediately, into her family.

The tension in the family is palpable. No one quite knows how to act or how much to say. Susan is in love and focusing on planning her wedding to her Annette (Kazia Pelka), but Stephanie is a distraction. Though Stephanie is desperate for a second chance with Pearl, Pearl’s reception is frosty. And Stephanie is losing weight.

Meanwhile, Pearl, with self-esteem issues of her own, is sneaking out with a drug-dealing boyfriend. Stephanie’s nurse, Shaun (Nick Blood) tries to intervene, playing a big brother or father figure and taking Pearl into his confidence. Although making regular home visits to check that his patient is not losing weight, Shaun has another, inappropriate agenda. When he begins “dating” Stephanie, Pearl takes note with devastating consequences.

As the wedding approaches, Susan is preoccupied leaving Stephanie alone at the table, chewing slowly and deliberately on undressed salad leaves and a glass of water, like a baby taking an hour to nibble a cracker, returning the rest to its mother. Even fitting Stephanie for a bridesmaid’s dress proves a challenge. At the wedding reception Stephanie makes a heart-felt speech, but when she refuses to eat even a bite of the wedding cake Susan cracks in a dramatic climax that will leave you shaken.

All films about anorexia have to deal with the impact of the disease on the family. Eating together is meant to be a celebration. It is what brings families together, and feeding one’s family so they grow into healthy, happy adults is how mothers express their love for their children. Something has gone wrong in Stephanie’s family, and it is a credit to Brydon that, with one major exception, we are not overburdened with psychological backstories and facile or clichéd explanations.

That one exception is Brydon’s choice of putting Susan in a lesbian relationship. It is intimated that Stephanie is a former war photographer, but little is made of this, or whether her disease is exacerbated by PTSD. Instead, this late-life marriage to another woman raises unhelpful questions, particularly as we know little about Stephanie’s father or Pearl’s father. It is reasonable that Pearl would be acting out and subconsciously looking to hurt the mother who is not there for her, and that Stephanie would be aware that a marriage and happiness is not on the cards for her. If Susan were planning a second marriage to another man, the same issues around a wedding could emerge without clouding issues.

The eating scenes in Body of Water are beautifully crafted to make the viewer feel like an uncomfortable voyeur being trapped inside her unfathomable mind. During the first meal, Susan, Annette, Pearl and Stephanie are all going through the motions, and Stephanie is eating just enough to divert attention. She is well practiced. But no one is relaxed, and it is hard not to focus on Stephanie’s fork.

In other eating scenes, Stephanie is alone at the table tackling salad leaves (no dressing) in real time. Cinematographer Darran Bragg reserves the film’s close-ups for these arresting eating scenes and focuses the camera on Stephanie’s face that conveys the despair and emptiness reflected in her sorrowful eyes. Siân Brooke’s courageous weight loss is not what makes her performance so gut-wrenching. It is the way Brooke inhabits the mind of a woman unable to save herself, even for the sake of her daughter, and a promising future.

The title might refer to the fact that 60% of the human body is water, although it takes much more than water to sustain it. Water is everywhere in the film. The three generations of women live on Canvey Island in Essex, surrounded by the sea. Pearl is a competitive swimmer, a sport that gives her a routine, a goal and self-esteem. And a scene in which mother and daughter seem to bond takes place on the seashore, as does the devastating finale.