Home / HEALTH / Rolling back the years 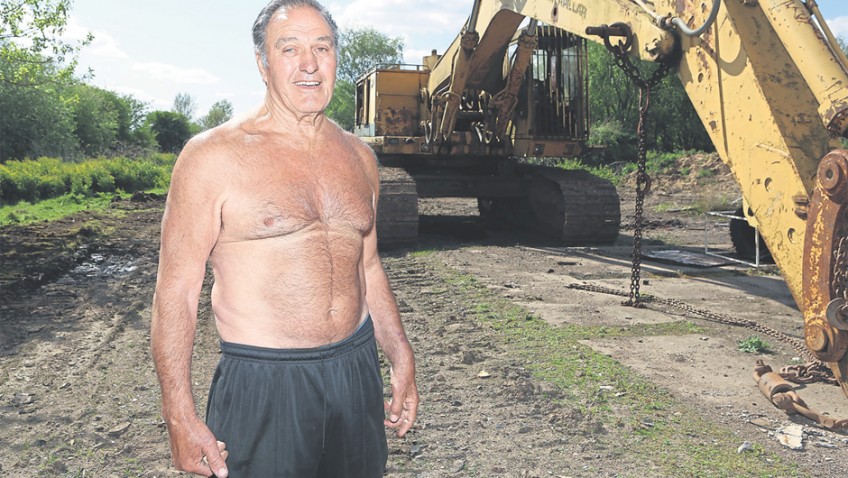 Rolling back the years

This super-fit 75-year-old great granddad puts his impressive physique down to “hard graft” – and rock and roll dancing.

Buff Bill Jones might be well into his eighth decade but he still looks sprightly – thanks to his thick natural dark head of hair and bulging biceps.

He claims he can “out-dance anybody” and said: “I am still enjoying everything I used to enjoy as a young man.

“When I was a kid, your grandparents were old at 40 but it doesn’t have to be like that anymore. It’s great.”

The dad-of-nine said he has never gone mad at the gym and attributes his muscular body to years of working with heavy machinery.

“I buy earth-moving machinery, such as excavators and bulldozers, that need repairing. I move them around and work with them to repair them before selling them on.

“I’ve done a lot of recycling in the past as well – I used to employ 35 people.

“It’s five days a week of hard physical labour. I have seven acres of land where I live and it’s full of machinery. “

Bill, who also has 25 grandchildren and four great grandchildren, has kept his mind fit and healthy and explained he has been in business for as long as he can remember.

He said: “I’ve been in business since I was seven or eight years old.

“As a little lad I would go down to the council tip and pick up old push bikes, do them up and sell them on Doncaster market.

“It’s kept my mind healthy and it’s kept me healthy.”

Bill also likes a dance and says that when he and his girlfriend of nine years, Pauline Weighill, 58, go out they get stuck into a bit of rock and roll.

Bill said: “I’ve been rock and roll dancing since I was 15 years old. I go anywhere where they play a bit of rock and roll.

Bill also said he eats in moderation and trains lightly three or four times a week.

He added: “I don’t overeat. I only eat to top up the energy levels I use.

“I’ve also built a gym at the side of my house – it’s a private gym but everyone from my family can use it.

“I do about 30 minutes of light training about three to four times a week and always have done, I’ve never been one to overdo the exercise.”

Ultimately, Bill puts his peak health and well-being down to not drinking and smoking.

Bill said: “I haven’t touched a drop of drink for 45 years. When I was a young man I used to go out drinking and driving – everyone did in those days.

“There was one occasion when I went out drinking and I was driving the car. When I woke up the next morning I just thought, ‘did I really do all of those stupid things?’

“I haven’t touched a drop since.”

Bill added: “How many people are no longer with us because of the harm they’ve done though drinking and smoking?

“The funerals I have been to because of it and the people I’ve seen who have such a low quality of life. It’s not worth it.”

Bill’s colourful career, including a spell of professional boxing and street fighting up until 25 years ago, and his big family, have also helped to keep him young.

He said: “I’ve managed to avoid stress throughout my life and it’s been very varied.

“My family plays a big part – every couple of months I host a big family meal, there’s about 30 people. We tell jokes and we have good, old sing-song.

“I’ve got a good, friendly and happy outlook on life – I don’t suffer fools but I haven’t had any cause for big stress in my life and I have a great family.”

Bill added: “I don’t have any plans to retire or let myself go. Why would I? I’m having too much fun.”