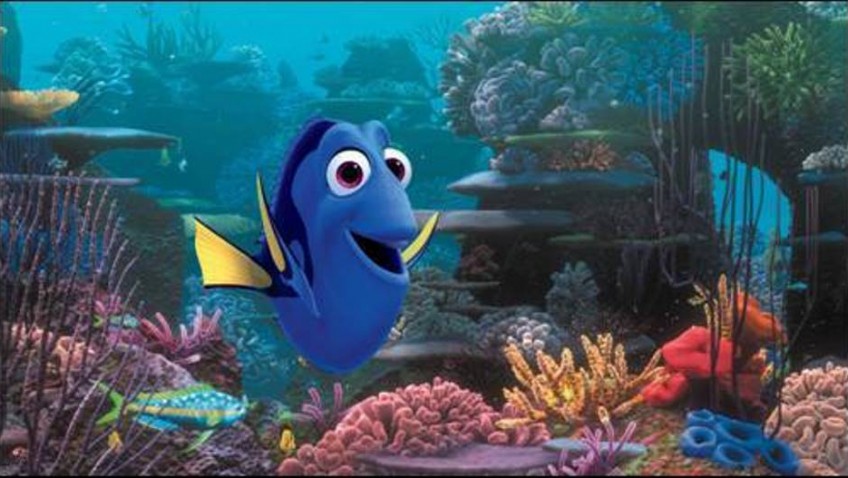 It’s summer time and it’s sequel time; no surprise there. What is surprising is that this week sees the release of two sequels in which the protagonists struggling to find themselves suffer from memory loss. This time, it’s the high-pitched, unbearably cute, memory-challenged, off-spring Dory (Ellen DeGeneres) who, after remembering she once had a family, goes in search of her parents.  Since Dory is doing the finding, the title might be confusing until you realise that the film is all about the insecure Dory ‘finding herself.’

Finding Dory has met with universal acclaim and a box office to match.  But if you aren’t taking your seven- year old child or grandchild (the five -year old tuned out half way through) there is nothing here you haven’t seen before.

There are, however, beautiful colours. Filmmakers Andrew Stanton and Angus MacLane make the most of the marine setting to create an underwater Disneyworld. They naturally include subtle environmental hints throughout the film and there’s even the voice of Sigourney Weaver in the loud speaker at the Marine Life Institute whose motto is: Rescue, Rehabilitate and Release. While the world pollutes the oceans at a faster rate than filmmakers can keep up with, Dory enjoys a crystal clear playground full of brightly coloured plants and fish. Even if there are enemies to avoid in the seas, she gets by with a lot of help from her friends. Top of the list are Marlin (Albert Brooks) and Nemo (Hayden Rolence), who accompany Dory on her quest to find her parents and Dory’s childhood friend, Destiny, a short-sighted shark.

The film opens with bulging-eyed regal blue tang Dory (young Dory is voiced by Sloane Murray and teen Dory by Lucia Geddes) greeting us, ‘Hi, I’m Dory,’ echoing the famous opening line of the most famous of all fish stories, Moby Dick.  This first-person opening is appropriate as Finding Dory is one of the most anthropomorphically –stretched movies imaginable.

Dory is hanging out with Marlin and Nemo and, a year after reuniting them, is part of the family. Suddenly she has a flashback and realises that has a real family (mother Diane Keaton and father Eugene Levy) but her short-term memory loss makes it difficult for her to remember anything else. Her only clue is that she remembers they were from Morro Bay in southern California.  Marlin and Nemo agree to accompany her across the ocean, a journey which is mercifully quick thanks to a fast current.  A scary obstacle (giant squid) and several more pleasant encounters are all part of the journey, which ends with Dory being ‘rescued’ by the Marine Life Institute.

It is here that the optimistic Dory encounters a setback that might upset younger children.  She is told by a tank full of other regal blue tang fish that it was years ago that Dory’s parents put themselves into quarantine in search of Dory and no one has seen them since.

At the Marine Institute Dory meets a grumpy East Pacific red, seven-legged octopus named Hank (Ed O’Neill) who, traumatised by life underwater wants to retire to an aquarium in Cleveland and not be released into the wild. Hank’s desire to obtain Dory’s ‘Cleveland’ tag unites the two and propels the second half of the film.  Hank now has an interest in helping Dory escape and one of his tentacles is continually plonking her in water to keep her alive.

Hank and Dory even hijack a lorry carrying Marlin, Nemo and hundreds of fish to Cleveland.  Dory offers strategic assistance from the vantage point of a convenient water jar on the dashboard.  Kids who have watched their parents trying to balance take away cappuccinos on the dashboard will be expecting the worst.

Arguably the most beautiful scene in the film comes when the lorry is overturned over a cliff, dumping the fish into the bay, as a means of escape. This is all shot in slow motion, synchronised to Louis Armstrong’s ‘It’s a Wonderful Life’.

There is no shortage of famous voices in the cast, some of whom you might not even notice.  Willem Dafoe is Gill, a Moorish idol and Bill Hader is Stan, a kelp bass.  Idris Elba and Dominic West make a refreshingly cynical comic duo as a pair of lazy sea lions sleeping on a sunny rock.

Scriptwriter Victoria Strouse includes lots of repetition for the youngest viewers and an episodic series of obstacles for Dory to overcome that adults know they will just have to sit through.  What distinguishes the film is the heroine’s short term memory loss and, to Strouse’s credit, she does work the infirmity into the plot, never forgetting that following verbal directions is particularly challenging for Dory. This paragraph contains a spoiler, so skip it if this matters.

‘You remembered,’ Dory’s parents tell her, ‘in your own amazing Dory way.’  This line gives you the flavour of the film that is crammed full of messages about individuality, never giving up, finding yourself, realising your potential, overcoming obstacles and the importance of friends and family.

While fish migration is briefly touched upon early on in the story, and the theme of families separated by the sea is central to the plot, there are no overt references to the migrant crisis going on above water and often underwater as well.  You wonder what the message over the tannoy would be if there were a Marine Institute for any humans washed onto the shores of Morro Bay.