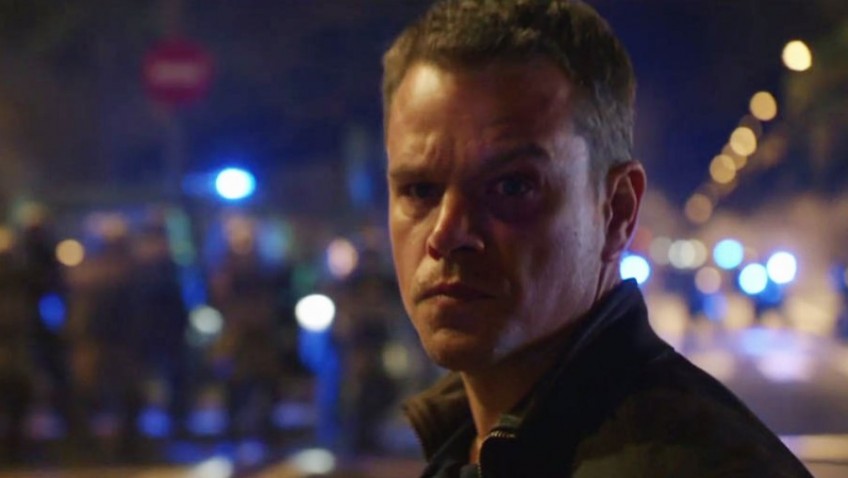 Along with a little fish called Dory, Jason Bourne is probably cinema’s most famous amnesiac in search of his identity.

He might have a hard time remembering who he is, but fans of the series will remember that the last time he appeared on the screen was thirteen years ago – in Paul Greengrass’s The Bourne Ultimatum.

Now Damon and Greengrass are back, in Jason Bourne, the sequel in which generations clash and the eponymous CIA assassin learns more about who he is than audiences may care to know. For if his back story proves anti-climactic, the action-packed, stunt-filled Jason Bourne is moving closer to Mission Impossible than to the romantically- mysterious, character-led Bourne movies we loved. So where has Jason been for all this time?  The answer is not a pretty one.  He has resorted to the masochistic behaviour of a war veteran unable to fit into normal society, living off the prize money from sleazy underground prize fights. When we first see him, Bourne is in Greece, removing his shirt to reveal an impressive physique (Damon began boxing in 2002 for The Bourne Identity) before knocking out his opponent.  Nearby, Athens is beginning to explode in civil strife.

Jason Bourne has disappeared off the radar, stewing over his discovery that he, David Webb, volunteered for an experimental special-ops program to mould him into an assassin, after being told that his father, Richard Webb (Greg Henry) had been killed in a terrorist attack.  But Bourne does not yet know the whole truth about his father’s death.

Nor does he realise that CIA Director Robert Dewey (Tommy Lee Jones) and The Asset (Vincent Cassel), a former Blackbriar program operative who felt betrayed when Bourne exposed that unlawful program, want to kill him.  For both men, finishing off Bourne is now a more personal than professional imperative.

Against a chaotic public protest at Syntagma Square in Athens, whistleblower Nicky Parsons (Julia Stiles),  Bourne’s collaborator since The Bourne Identity, makes contact with Bourne.  Parsons, who also went into hiding after the Bourne Ultimatum, is now working with a Snowdon-type idealist named Christian Dassault (Vinzenz Kiefer). While hacking the CIA’s server, Parsons discovers that Bourne has been exposed and travels to Greece to warn him of Dewey’s new, insidious program. Heather Lee (Alicia Vikander) a young, ambitious Stanford graduate who heads the CIA’s Special Ops Divisions is alerted to the hacking and quickly takes action to minimise the damage.  She and her direct boss, Dewey, instruct operatives in Athens to bring in the pair. Dewey wants to take them out. Heather, who has studied Bourne’s psychiatric records, believes he is a patriot who, with the right tactics, can be persuaded to return to the fold. She angers Dewey by getting Deputy Director Shepherd (Edwin Russell) to back her idea.

Toward this end, Heather Lee makes initial contact with Bourne in Paddington Square, right after Bourne pressures former CIA agent, Malcolm Smith to reveal the truth about his father’s murder.  Unbeknown to Lee, Dewey is thwarting her objective by instructing the Asset to kill all of her operatives, Smith and Bourne.

Meanwhile, after various scenes in Greece, Beirut, Rome, Reykjavik (all Tenerife), London and Washington D.C. (appearing as themselves) the action and key characters converge in Las Vegas, where a big climactic scene takes place. Dewey, who is behind the CIA funding of Deep Dream, a Facebook-type start-up run by Aaron Kalloor (Riz Ahmed), envisions using the personal information collected by Deep Dream to acquire a more comprehensive type of surveillance.

Kalloor is alarmed at the implications for Deep Dream as a result of the hacking and plans to use an upcoming Las Vegas conference on the topic of The Right to Privacy vs. National Security – the theme of this film — to come clean.  His opponent on the stage will be none other than Dewey who learns of Kalloor’s intentions and instructs the Asset to wound him, but kill Kalloor to make it look like a terrorist attack.

A seemingly inevitable car chase between Bourne and The Asset is impressive, but anti-climactic and takes the film to the 2-hour mark.

While the plot (and it is only summarised here) is complex, it is easy to follow, as are the action sequences shot by Greengrass regular, the British DOP Barry Ackroyd. But in many ways, the plot distracts us from the essence of Bourne with a topical, if already hackneyed, debate on personal privacy vs. public security.  Without the Bourne mystique, Bourne is just another Ethan Hunt without a team. The action is brilliantly directed, but leaves no time for character development, let alone meals, romance or any meaningful interaction between the characters. Bourne has not seen Parsons in years, and yet there is no time for them to discuss their lives in hiding before they start running.

Nor is there a scene between Lee and Bourne to establish their relationship for the remainder of this film and, possibly, the next.  Dewey comes across as a crazed rogue agent and does little to represent a rational argument for national security over privacy, notwithstanding the fact that, with recent events, that argument is much stronger in the public’s mind.

One could argue that the real tension in the film is between Heather Lee, a technology savvy ambitious woman with perfect skin in her late 20s, and craggy-faced Dewey, who is characterised in the production notes as a ‘relic of the CIA’.

While Lee is far too young to be a contender for the job of CIA Director, Dewey would not have his job in his late 60s if he were a dinosaur.  Perhaps this conflict is  a reminder for Jason Bourne — now in his mid 40s – to start thinking about how to reclaim his CIA pension.