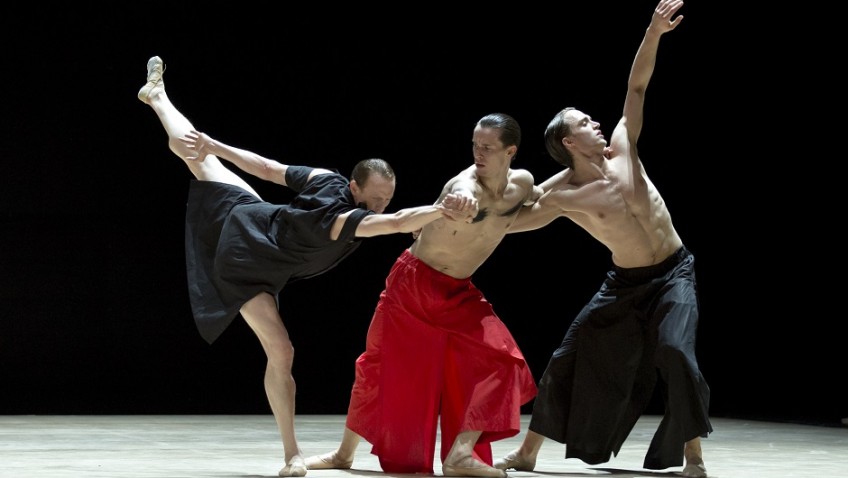 The triple bill opens with Obsidian Tear, a new work by Wayne McGregor, who says, “I want the meaning to be readily accessible but at other times remote.” But what is actually going on? Who are these interacting 9 macho men, 8 in black kilts, 1 in red silk trousers?  Could they be Apache warriors preparing for some sacrificial rite or are they Bullingdon Club bullies or possibly French legionnaires Claire (Beau Travail) Denis might know?

MacMillan created The Invitation in 1960, the era of the angry young men in theatre and cinema.  MacMillan’s felt ballet needed the same sort of grit and realism. The setting, nevertheless, is a pretty colonial country house party in the Edwardian era.

The scenario is based on novellas by Colette and Beatrix Guido. Two young innocents, a boy (David Donnelly) and girl (Yasmine Naghdi) are seduced by an unhappily married middle-aged couple (Olivia Cowley and Thomas Whitehead). The music is by Matyas Seiber

The innocents in 1960 were created by Lynn Seymour and Christopher Gable. The scenario feels like it might be a play by Jean Anouilh, a piéce rose which suddenly turns into a piéce noire. The girl is raped on stage.

The then Artistic director Ninette de Valois, finding the scene too explicit for ROH audiences, asked MacMillan to have it take place off-stage. He refused. Fortunately, she let him go ahead. Brilliantly choreographed, the rape remains the high spot.

Christopher Wheeldon created Within the Golden Hour for San Francisco Ballet’s 75th birthday in 2008. It is a series of neo-classical abstract episodes for seven couples to music by Ezio Bosso.

It is a spontaneous, playful, intimate, quirky piece; easy to watch, sometimes very fast, sometimes very slow, it builds to a joyous finale. The physical geometry, excellently executed, is fascinating.

My appetite is whetted. I hope to catch up on Wheeldon’s Strapless andThe Winter’s Tale. I am also looking forwarding to seeing his award-winning choreography for the Broadway musical, An American in Paris, when it comes to London next year.