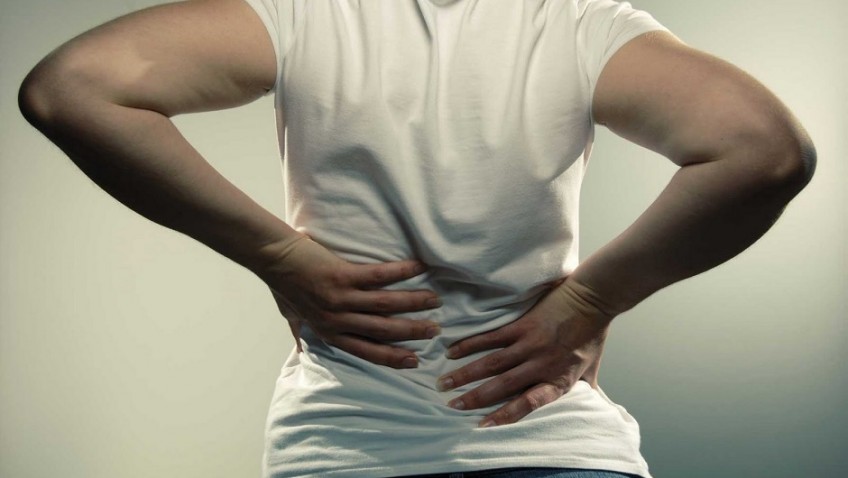 More than HALF of UK adults over the age of 40 are suffering from persistent neck and back pain, according to new research.

A poll of 2,000 over-40s revealed that 51 per cent regularly suffer from the debilitating aches and pains.

The most common causes are cited as gardening and lifting heavy shopping bags, but 25 per cent blame years sitting in an office chair.

A further 17 per cent say they can have a bad back following a poor night’s sleep, while a fifth suffer after carrying young children around.

But it’s not all doom and gloom for those leaving their thirties – as one in 20 respondents blame their ongoing back pain on too much SEX.

Andrew Gallagher, chief operating officer for Phynova Joint and Muscle Relief Tablets, which commissioned the study, said: “Long-term pain is a huge and growing problem in the UK and has a really damaging impact on people’s lives.

“Living with pain puts a huge strain upon people, often preventing them doing the things they love and triggering mood swings and depression. As a result it can also put a lot of pressure upon people’s relationships.

“As a country, it’s important we start to look more closely at what could be causing this pain and find new ways to manage and treat it.”

Other factors which can lead to back problems include undertaking DIY or home improvements (20 per cent) and exercising (27 per cent).

A further 14 per cent suffer muscle aches after mopping or vacuuming the floors, while one in 10 even ache after walking up the stairs.

Some of the more unusual causes of back pain include washing up, cooking, and drying or brushing hair.

While seven per cent of women admit some of their problems are caused by wearing ridiculous heels.

Researchers have found many people over the age of 40 feel restricted by their symptoms, and as such can’t always participate in everyday activities.

For 36 per cent of people with back pain, things are so bad they have given up all forms of exercise, while 42 per cent find it difficult to walk comfortably.

A fifth of respondents with muscle problems claim to have put on weight as a result of their condition, one in 10 experience mood swings and a fifth have had to take time of work.

On occasions, 22 per cent of people can feel very low and depressed, one in 20 say it has affected their relationship with their spouse while one in 10 have been unable to have sex.

Having to refuse to pick up the children, stopping favourite hobbies, interests and socialising are all consequences of living with regular back, joint and muscle pain.

Incredibly, 42 per cent of the 2,000 adults polled have been prescribed some sort of pain relief for back pain or a minor sports injury over the past five years, and currently 13 per cent are taking medication to relieve aches and pains every single day.

Andrew Gallagher for Phynova Joint and Muscle Relief Tablets continues: “The findings of the research highlight just how widespread chronic pain is for many people it’s not something that should be accepted as part of getting older.

“The myth is that many people suffer back ache as a result of an injury or ‘putting their back out’ the reality is that it’s often our lifestyles, habits and hobbies that are the cause of the problem.

“We have developed Phynova Joint and Muscle Relief Tablets which contain the herb Sigesbeckia as the active ingredient.

“As our research has shown, many people are often living with daily pain and are looking for alternative ways to relieve their symptoms.”

TOP CAUSES OF BACK PAIN IN THE OVER 40’S:

1. Gardening / mowing the lawn
2. Lifting luggage /shopping bags
3. Playing sports / exercise
4. Sitting for too long at the desk
5. Carrying / lifting children
6. DIY / home improvements
7. Sleeping in an uncomfortable position
8. Hoovering / housework
9. Walking up the stairs
10. Tottering around in heels
11. Washing up
12. Too much sex
13. Cooking
14. Drying or brushing hair
15. Changing the channel on TV