Home / LIFESTYLE / REVIEWS > / A post War World and a nativity 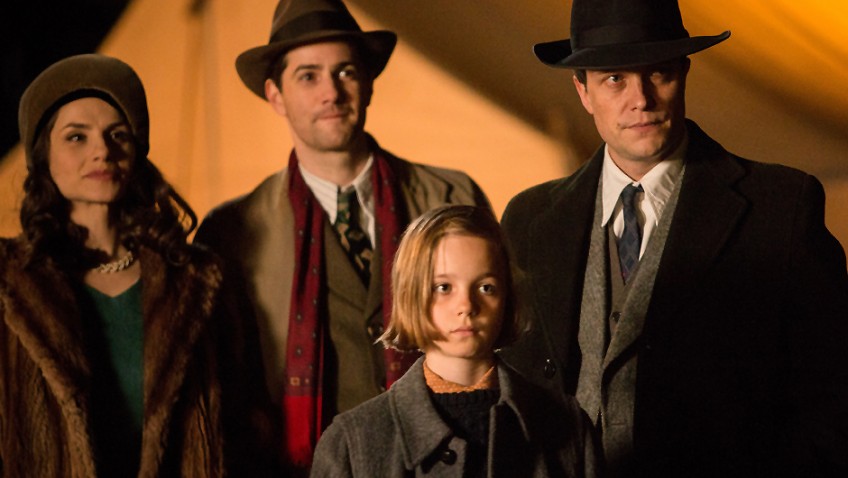 Have you been watching…

Close to the Enemy

With so many excellent dramas on our television screens this year we are lucky to have access to some of the best terrestrial television in the world.

Highlights for me have been:  Peaky Blinders, The Night Manager, The Durrells, National Treasure, Line of Duty and, of course, just finished, the gripping The Missing.

With another 3 episodes to go I am really enjoying the Stephen Poliakoff’s period drama, Close to the Enemy.

Set at the end of WWII depicting a bombed and struggling London the government is trying to garner information from German scientists to put the British defence industry one step ahead of the Americans and particularly the Russians.

Producer Helen Flint, a long-time collaborator with Poliakoff on previous productions said : “This is a complex and interwoven story but it’s not a ‘worthy piece’ of historical drama as its relevance is very current to today with all the conflicts swirling around the world. The piece is set after the five endless and brutal years of the Second World War. The aftermath of the bombing of London is still very evident. Light drenched the city as the sun filled the void where buildings used to stand, and children play in the left-over bombsites.

“Austerity Briton brought severe rationing and the talk of Nuclear Bombs and the Cold War frightened people to their very core as much as German bombers did during the war.”

Captain Callum Ferguson is assigned one final task for the Army: to ensure that a captured German scientist, Dieter, helps the British to develop the jet engine. The charismatic ex officer is trapped in his job by his allegiance to his war damaged brother, Victor. There is a slew of other interesting characters from German war criminals, MI5 agents, a jazz band, endearing children and at least three attractive temptresses.  It may not be the most easy to follow plot, and the dialogue and accents are a bit shaky but it is certainly entertaining.

If you have missed this series, you can catch up on BBC iPlayer.  It is well worth a look.

Read all about it…

The Ashes of Berlin by Luke McCalin

If you enjoyed the recent BBC adaptation of Close to the Enemy then this book is for you.

A multi-layered tale full of high diplomacy, subterfuge, lies, duplicity, betrayal and murder – an insightful and provocative page-turner. The author has a wonderful sense of time and place making this a riveting read that’s hard to put down. It reminds us that the end of conflict is all too often the start of a long, troubled road to recovery.

Set in Berlin in 1947, this is the third novel in the Gregor Reinhardt series. An unlikely protagonist, Reinhardt is a former Berlin detective chased out of the police by the Nazis. Unwilling to join the Party, he resisted being transferred to the Gestapo, eventually becoming an officer in military intelligence.

This novel sees Reinhardt bought back into Berlin’s civilian police force at a time when it is riven by internal factions and rivalries between those trying to gain recognition with their new masters – whoever they might be. The city is struggling with the infrastructural and social destruction of the war and the complexities of a city divided between the victorious Allies. Escalating tensions between the Allies, the desire to hunt down war criminals, the drive to obtain German scientific knowledge combined with the threat from those who refuse to accept the war is over forms the volatile cocktail that is the backdrop to this tale.

Reinhardt soon discovers that whilst the war may have ended the bloodshed has not. A man is found brutally murdered in a dilapidated apartment block and Reinhardt is dawn into a macabre investigation. The discovery of other victims makes it apparent that a serial killer is on the loose and Reinhart is determined to unearth whatever links the victims and to discover the killer’s motive. Food is scarce and hunger, cold and despondency stork the city’s residents – life is hard and uncertain for all. Reinhardt’s colleagues seem to be working against him and knowing whom to trust is proving difficult. These are dark times where all may not be as it seems and where choices made have far reaching implications.

Amidst and chaos of political events, personal relationships between friends, family and colleagues are explored.  The characters are intelligently and insightfully drawn and give the reader a glimpse into the complexities of life in the aftermath of such a long and brutal conflict. Reinhardt is a complex character haunted by what he has seen, tortured by recurring nightmares and by the burden of loss. The orphans living feral amongst the ruins, those trying to come to terms with events and those jockeying for power and influence paint a foreboding, grey picture of Berlin’s future.

The Last Debutante by Lesley Lokko

Another book covering this time frame and beyond, tells the story of a woman who spent her life as a British Agent.

Opening in 1936, Chalfont Hall, Dorset, the 13-year-old Lady Katherine, bored with her privileged upbringing and determined not to follow her older sister Lily, as a debutante, Kit, as she is known, is determined to be useful to her country.

When she visits Lily in Germany just prior to the start of WW2 with her Uncle, Kit takes the opportunity to spy on her sister’s house guests who are closely linked to Hitler.  From then on, despite disastrous liaisons with unsuitable men, Kit continues in espionage.  Recruited by SOE (Special Operations Executive) at the start of the war she continues her career through the 1950s in Iraq, Oman and the Caribbean.

Following the lives of Kit, her daughter Libby,  and sister Lily takes the narrative up to 2014 with plenty of heartbreak and surprises along the way.  I was surprised at how engrossing the story became and how the characters wove in and out of the action.  Well worth a read.

And now for something completely different…

The Virgin Mary’s Got Nits by Gervase Phinn

Gervase Phinn is well known for his humorous accounts of life as a teacher in the Yorkshire Dales and this book will not disappoint his fans. Here he draws on all his years of teaching and of being a school’s inspector in the Yorkshire Dales for the source material in this engaging and thoroughly enjoyable collection of Yuletide stories, poems and prose. The children and the teachers are wonderfully and endearingly brought to life. These tales are entertaining and touching in equal measure with amusing mishaps and misunderstanding sprinkled like glitter.

The author uses his own childhood experiences to great effect and his role as a palm tree in his primary school’s nativity play really made me chuckle. Incidents from a life in the classroom abound and the author is not afraid of poking fun at himself along the way. This would make a good Christmas gift for any Gervase Phinn fans on your Christmas present list or perhaps a present to yourself.