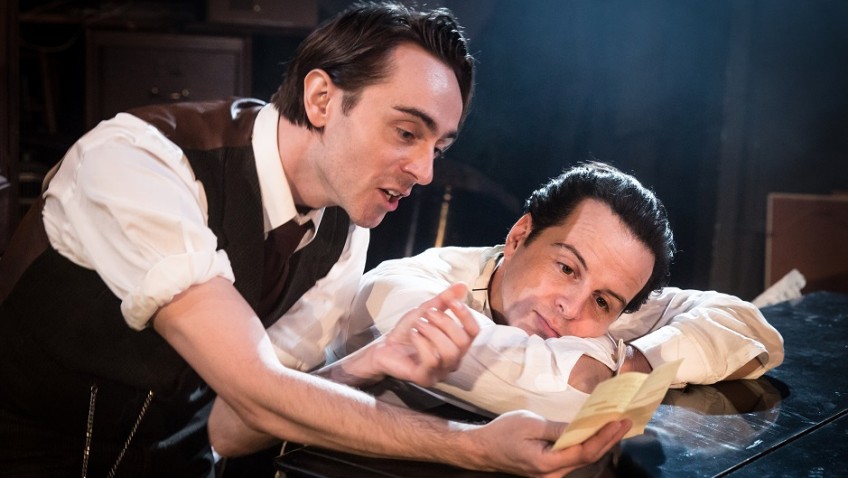 Found 111 is a temporary space at 111 Charing Cross Road, the original site of the Central St Martin’s School of Art.  Access to the auditorium involves climbing 71 steps. There is no lift.

American playwright Richard Greenberg says that “The Dazzle is based in the Lives of The Colyer Brothers, about whom I know almost nothing.”

Homer and Langley Colyer were two eccentric American recluses, who became famous when they died in 1947. They were found in their barricaded home in Harlem, buried beneath 140 tons of junk which they had accumulated over many decades

They were obsessive hoarders: 14 pianos, 2 organs, a collection of guns,baby carriages, rusted bicycles, more than 25,000 books, human organs pickled in jars, hundreds of yards of unused silks and other fabrics, bundles of old newspapers and old magazines, thousands of bottles and tin cans and a great deal of garbage.

Before they became recluses, Homer, born in 1881, was a lawyer and Langley, born in 1885, was a pianist. Langley had always been an odd-ball and Homer had promised their mother before she died that he would always look after him.

When we first meet them they look like dapper young men who might have stepped out of the pages of novels by Henry James and Edith Wharton. A beautiful and rich heiress (Joanna Vanderham) falls in love with Langley. By the end of the play the brothers look like Samuel Beckett’s tramps.

The pleasure of The Dazzle (which premiered in New York in 2002) is in its heightened, ornate language. Greenberg, who has a real feeling for words, writes in a very self-conscious and stylish and witty way. The play is at its best in the first act.

Simon Evans’s production has in Andrew Scott (Langley) and David Dawson (Homer) two clever and distinctive actors who know exactly how to play the quirkiness and how to enjoy and deliver the dialogue.