The addictive bestseller that everyone is talking about now

You may have already read this number one bestseller book and you may have seen the film, but you will almost certainly have heard about it.  It is the bestselling book of the year and following the film release, this novel which was published in paperback in January 2013, has shot back up the charts. 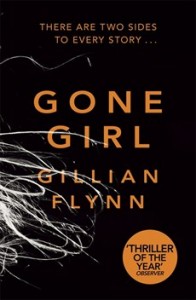 It is a gripping psychological thriller about a young couple who have been married for 5 years when the wife, Amy disappears; but to say much more will give the game away.  It is a tale of marriage, resentment, cunning and small town lives that become the property of the national media.

Flynn’s writing is taut but flowing with an elegance that does not cause friction in the reading although she does adapt the style to suit the different protagonists.  She has very cleverly dragged us into a conflict between husband and wife where we cannot take sides:  who is telling the truth and is there any veracity to either side of the story?

I struggled slightly with the first part of the book and was irritated by the character of Nick, the husband who seemed ineffectual and shallow.

The friend who had loaned me the book insisted that I keep going and my goodness, I am so glad I did.  The shadowy figure of Nick’s wife became a huge force in the story and turned the narrative on its head.  I am not giving anything away so you must read it for yourself – and I mean MUST.

This is my first read of Gillian Flynn’s bestseller was so compelling that I am almost wary of reading anything else by her as it could be a disappointment.