Home / LIFESTYLE / REVIEWS > / FILM REVIEWS / A mother and son embark on a journey of self-discovery and give us the perfect mother’s day gift. 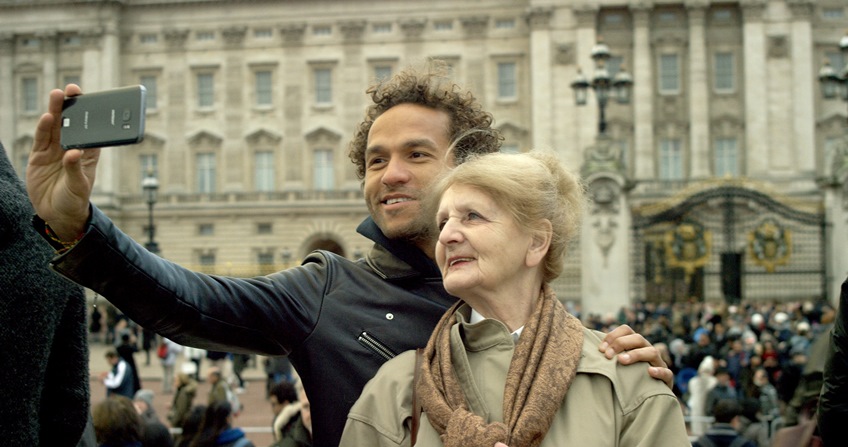 A mother and son embark on a journey of self-discovery and give us the perfect mother’s day gift.

Though Sian-Pierre Regis’ love letter to his mother, Rebecca, covers some painful ground, the best mother’s day gift around is a trip to the cinema to see the heart-warming and inspirational, if cryptically entitled documentary Duty Free.

For most of his life Sian-Pierre, an independent journalist in New York, had been dependent on his mother who sacrificed her life, as mothers do, working as a housekeeper to give him and his older brother Gabriel, every opportunity she could provide, including an education she could only dream about. Gabriel suffered a breakdown in his teens and is still semi-dependent due to mental illness.

Sian-Pierre and Rebecca always assumed she would continue working as a Housekeeping Supervisor. For the past forty years she has lived in the same apartment in Boston on the sixth floor of a YWCA working as a housekeeper on call 24/7 in exchange for the apartment and a small wage. Here she brought up Gabriel, her son with a black man and was pregnant with Sian-Pierre when she discovered he had another family and they separated. When the Y became a luxury hotel ten years ago, Rebecca carried on as the Housekeeping Supervisor with a spotless record. It was more than a job, Rebecca reminds us; the staff were family.

As the film begins, Rebecca, 75, has begun receiving warning letters and then she was sacked for insubordination, with two weeks’ pay and a year to vacate the apartment. Sian-Pierre, 32, decides it’s pay-back time. After helping his mother get online to help with the job search and seeing her self-worth dissolve with every rejection and hurdle, he treats her to a bucket list holiday.

This is the plot of Duty Free, the odyssey of a devoted mother and son. It is not sentimental because, despite tears of frustration and concerns about the well-being of Gabriel, there’s no time for self-pity. And Sian-Pierre, though caring, is not the shmaltzy type. Although, unfortunately, the film avoids any discussion on the effectiveness of America’s age discrimination laws, to his credit, he turns the film into a case study in age discrimination, looking at the wider impact of being sacked.

‘I feel my value in their eyes is diminished and it’s not a good feeling’, Rebecca tells Sian-Pierre who has turned filmmaker to document his mother’s dilemma. She gets dressed up full of self-belief, only to return to the bad news of another rejection.

This is when Sian-Pierre decides that what his mother needs is a break, and crowd-funds a year in which Rebecca can create a bucket list and realise her dreams.

Although this bucket-list feels gimmicky and distracting (people don’t milk cows anymore, machines do and yes, septuagenarians can skydive with an instructor tied to them) it is the device through which we learn about Rebecca’s tough life; about the decisions and sacrifices she made and the regrets that affect her, and others.

When Rebecca chooses a return to Detroit for her bucket-list, we learn that young and attractive, she arrives in the optimistic, shiny, industrialised city from Liverpool in the early 1970s to promote British tourism (no details on that job). There she meets John and has a daughter, Joanne. But it’s a bad marriage, they divorce, and she starts working in a hotel (that is now derelict). If life isn’t hard enough, Rebecca discovers she has breast cancer. Having been brought up herself by her older sister, Elsie, when their mother fell ill, Rebecca sends Joanne to live with Elsie and her family in England.

One of the items on the bucket list is a reunion to the estranged Joanne and baking a cake with Joanne’s young daughter, Layla whom she has never met. You get the feeling that this trip has opened new doors for Rebecca and her “other family”, that will pay dividends as they plan future visits via zoom calls. But Sian-Pierre is also touched by this reunion and has some hard questions for Rebecca about abandoning Joanne, who has suffered from low self-esteem and rejection.

Though they talk briefly about her experience growing up as a single mother with black children, it is when Rebecca chooses to learn hip-hop dancing, that the racial theme becomes personal. She tells Sian-Pierre that she could not get inside his skin, but she watched how he moved when he danced growing up and wanted to experience that to be closer to him.

Throughout the film the thread of family runs alongside that of work. During the bucket-list year, Sian-Pierre points out they are celebrating the first Thanksgiving his mother hasn’t been working. But Rebecca is already thinking ahead, having applied to Princess Cruises to be a housekeeper on a cruise ship.

Rebecca points out that the job of housekeeping supervisor has many transferable skills: Time pressure, quality control, inventory control, guest services, technique and keeping a smile on your face at all times. But when young employers see her CV, they imagine a dotty old lady with a Zimmer frame and won’t grant her an interview.

Duty Free is not only Rebecca’s journey, but Sian-Pierre’s. He tells us that he couldn’t get his mum a job, but he could tell the world her story, which was more universal than either of them imagined. At 76, Rebecca became an internet sensation appearing in publications from Forbes to Good Housekeeping. Most rewarding is communicating with her many followers from all over the world who speak of their experiences being thrown on the scrap heap while having so much to give.

‘I never realised that everyone needs an advocate,’ Sian-Pierre says of his mother’s newfound fame. But it works both ways, for Sian-Pierre has gained something from the journey and is now a filmmaker. As Rebecca points out, ‘It’s a mum’s job to give all those gifts, but it’s a son’s job to accept them graciously as you run with them and show the world what you can do.’