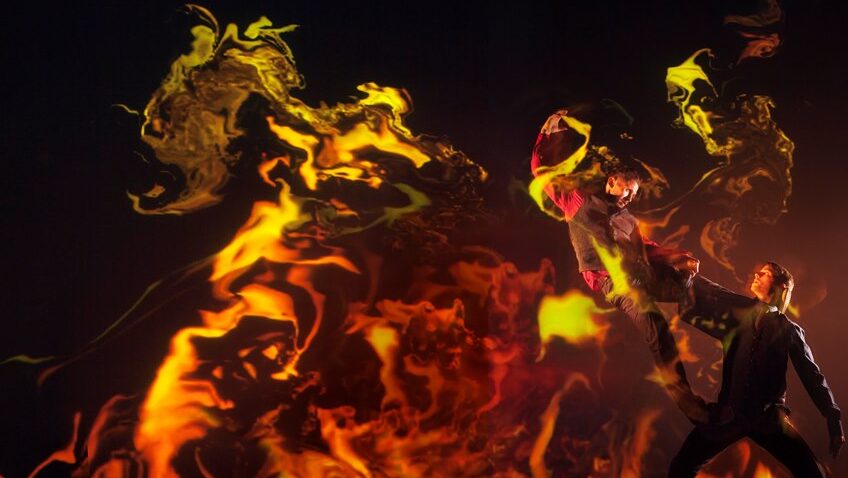 With compelling music and powerfully loud, expressive dialogue and narrative, the infamous tale of Doctor Faustus unfolds in the Roaring Twenties’ prohibition/gangster era. Yet not a single word is spoken or sung on the stage, for this is Southpaw Dance Company and they specialise in danced movement.

As at a cinema, rich, resonant, pre-recorded American tones reverberate around the auditorium to tell the story and voice the dialogue, all to great effect. Meanwhile, onstage the dancers mime the words and enact the characters, their gestures and movements large, exaggerated and stylised, like those of puppets or cartoon characters – which does become a bit same-ish. All the while the music keeps coming, combining big band classics, contemporary hits, tense sound-scapes and sound effects with songs like Putting On the Ritz, I Put A Spell On You or a hazy, distorted I Get No Kick from Champagne, all interpreted through, mime, dance and movement. Broad, fluid shimmerings and wrigglings accompany the delivered lines as dance travels from 1920’s swing to BBoying, the break dances proving quite breathtaking.

The backdrop visuals are as massive, frenetic and relentless as the music and dance, and constantly on the move. Props may consist of just odd chairs and tables and a large pair of glimmering angel wings, but behind, throughout, five aesthetically-pleasing boxes are cleanly outlined in bright lighting, three squares and two rectangles. All manner of projections flit and flash through the boxes (disappointingly entirely in black and white), from footage of dancers of the era and romantic clips of Audrey Hepburn and Jimmy Stewart to more abstract images and a clever projection of our dancing, onstage Faust. When the live dancer sees himself in a roughly drawn mirror, he engages in a desperate, demented dance with his projection as they fly across the boxes.

Having sold his soul to the Devil in his quest to find more meaning to life than he’s found through knowledge and learning, Faust, Doctor of Philosophy, formerly a studious, highly moral man, full of integrity, now finds his life is nothing but hassle, madness and torment. Deceived by the cackling, wily Devil and by Lady Mephistopheles in a red jumpsuit, he’s helpless to fend them off. In the end, though, might the simple, innocent waitress Gretchen prove his salvation and give more meaning to his life than all the drinking, gambling and loose women (embodied by young local lasses dancing their legs about in glittery costumes)?

A great deal of the show’s 70 minutes of energy and vigorous momentum is achieved through the big, big soundtrack and visuals. It’s a fine concoction, but a more extensive variety of gesture and movement and more coordinated precision would enhance it further, together with a greater clarity of the story’s enactment at various points. Yet it’s all too clear, nevertheless, that Satan is ready and waiting for each of us! He’s such a devil when it comes to laying traps!