Home / LIFESTYLE / REVIEWS > / FILM REVIEWS / A misguided adaptation of Joanna Rakoff’s My Salinger Year looks through a glass too brightly. 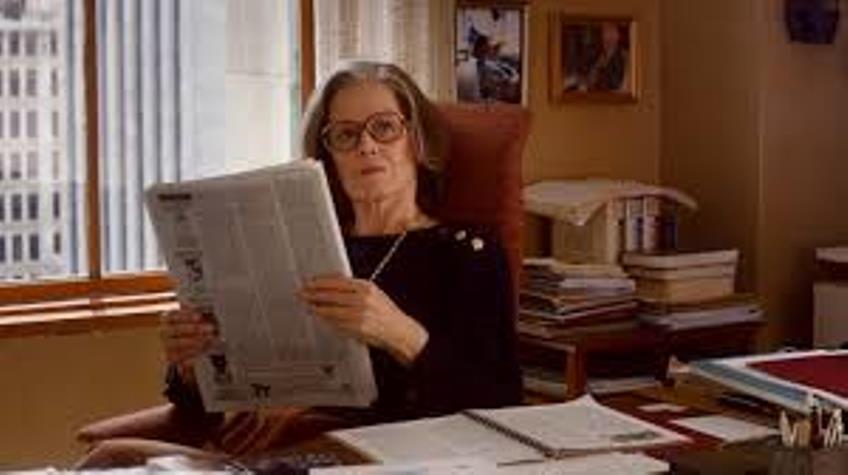 A misguided adaptation of Joanna Rakoff’s My Salinger Year looks through a glass too brightly.

The goodwill left over from Philippe Falardeau’s acclaimed 2011 drama, Monsieur Lazhar, must still be strong and the proof is that this off-point adaptation of Joanna Rakoff’s 2014 memoir, My Salinger Year was greenlit and made. There, is, of course, more than goodwill involved. In addition to the memoir, with its real-life associations with the iconic J.D. Salinger, Falardeau secured one superstar, Sigourney Weaver, and one rising star, Margaret Qualley.

Here’s where the problems start, though. Weaver’s Margaret, the head of an esteemed Manhattan literary agency, is a watered-down version of Meryl Streep in The Devil Wears Prada. And Qualley – the scene-stealing, seductive hitchhiker “Pussycat” from Once Upon a Time in Hollywood – as Margaret’s clueless, but soon indispensable, assistant and aspiring poet, is wasted, if not miscast.

It is the autumn of 1995, and, in a first person-narration, Joanna tells us that she has dropped out of graduate school in Berkley, and left her musician boyfriend, Karl, to pursue her vocation in the Big Apple. Joanna imposes on an initially welcoming friend (Seána Kerslake) before displaying her naivety at an employment agency. Despite being green, she lands a job at a prestigious literary agency. Referred to as the agency, it is a fictional version of the legendary Harold Ober Associates.

Margaret (Weaver), – modelled after Phyllis Westberg, who replaced Harold Ober’s successor, Dorothy Olding, in 1990 – reigns over an institution stuck in the past. ‘We choose not to use computers,’ Margaret pronounces, considering the new-fangled things ‘make more work than they save.’ By the time Rakoff joined the agency in 1995, most of their famous clients, such as Agatha Christie, F Scott Fitzgerald and William Faulkner were dead, like the authors literature-student Joanna likes to read. As an agent, however, she is encouraged to read living authors.

So, Joanna, who does not know how to type on a Selectric typewriter or use a Dictaphone, has to fudge it to get the job. Then to the nitty-gritty. ‘We have to talk about Jerry’, Margaret says, referring to her major client, J.D. Salinger, unaware that Joanna has no idea who Jerry is.

Joanna’s main job will be ensuring no caller is given any information about or access to Jerry; and that the letters addressed to him will be answered with a standard, formal response from 1963 – the last time Salinger read his fan mail. However, they do have to be read before being shredded, just in case there is another Mark David Chapman. Chapman was reading Catcher in the Rye when he shot John Lennon.

Strict instructions, too, for when Jerry calls. ‘He doesn’t want to hear how much you love Catcher in the Rye’ Margaret warns, never imagining that her new recruit has never read any Salinger. ‘And never mention your stories,’ Margaret adds, pointing out that ‘writers make bad literary agents.’

Despite this inauspicious beginning, rather predictably, Joanna makes herself indispensable and is soon allowed to read manuscripts, a job thousands of English majors would kill for. ‘What if I don’t like it?’ Joanna asks Margaret of her first manuscript. ‘Then you have to find someone who will’, is Margaret’s obvious answer. But Joanna wants to write and sell her own stuff, not peddle other people’s.

The focus then turns to a factual episode in Salinger’s life that brings him into the film’s present. In 1996, Salinger gave a small publisher, Orchises Press, permission to publish Hapworth 16, 1924, a novella that had, years before, been published in the New Yorker Magazine – more on the novelty of a new work by Salinger, than on its merit.

While Margaret is ignorant of the niche publisher in Virginia, Joanna knows all about it as it publishes poetry. She convinces Margaret to let her go to Georgetown University (Washington D.C.) to “be the eyes and ears of the agency” when Jerry (Tim Post) lunches there with the publisher. The meeting is a big success and Joanna has time to make amends with Karl (Hamza Haq), who happens to be in town for a concert. Karl wants her back in his life, if only to talk on the phone.

Back in NYC, Joanna quarrels with boyfriend Don (Douglas Booth) the handsome proprietor of a Marxist bookshop, when he fails to invite her to his best-friend’s wedding. She breaks up with Don around the time that she bonds on an emotional level with Margaret, now vulnerable after the death of agent Dan (Colm Feore), who, Joanna discovers, was Margaret’s married lover. So underwritten is Dan’s role that the fact he was bi-polar and killed himself seems spurious rather than tragic.

But with this personal parity Joanna has possessed not only the minds, but the hearts of the agency. This means it is time to leave and do what she really wants.

Unfortunately, Falardeau does not dramatise the tangible connection between the fan mail writers (who intermittently come alive as characters, pouring their hearts out to the camera in awkward sketches) and Joanna’s formation as a writer. You may well wonder why he bothers to include these vignettes at all. Nor do we see how, when Joanna’s starts reading Salinger, she evolves as a person or as a writer.

Nor is there any evidence that Joanna is freeing herself from the coercive influence of men and older people on her life as in the source novel/memoir. Both Karl and Don appear encouraging and flexible, and Margaret gives Joanna more and more responsibility. In short, there is no real conflict or tension. Nothing much is at stake.

And then there’s J.D. Salinger, who, if he died today, would be tip-toed around like Philip Roth. While Salinger is treated like a god and comes across like a mentor, encouraging Joanna not to ‘get stuck answering the phone, you’re a poet’, today’s audiences might feel uncomfortable at this romantic nostalgia.

By 1995 it was well known that 18-year-old Joyce Maynard left Yale to live with the middle-aged Salinger. And if Salinger’s daughter Margaret’s Dream Catcher, a caustic, self-pitying, fictionalised account of living with her reclusive father had not yet been published, it was no secret. Salinger left a trail of women who made enormous sacrifices for him, only to be rewarded by his philandering or abandonment. Before Maynard, he had forced his second wife, Claire Douglas, to drop out of Radcliffe before ditching her. You cannot help thinking that if pretty Joanna had not left the agency, she might have been the next.