Home / LIFESTYLE / REVIEWS > / THEATRE REVIEWS / 38 years after its release Jeff Wayne re-invents his musical version of “The War of the Worlds”. 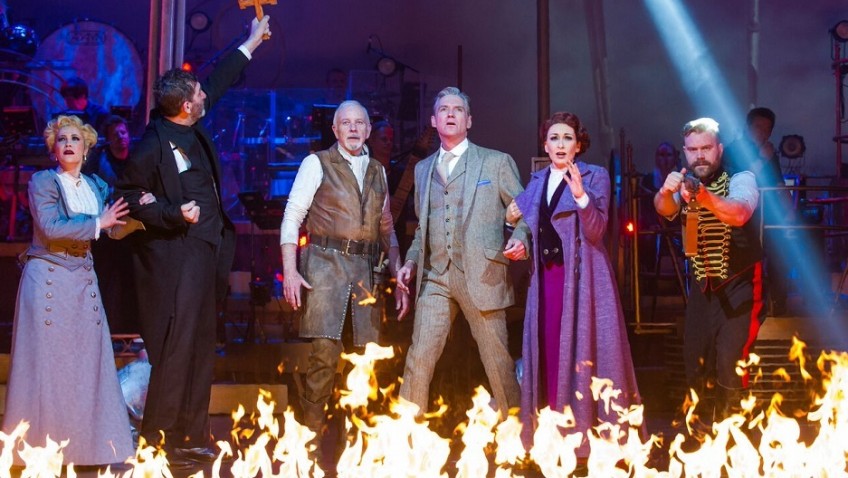 38 years after its release Jeff Wayne re-invents his musical version of “The War of the Worlds”.

Robert Tanitch reviews The War of the Worlds at Dominion Theatre, London W1

H G Wells’s novel, first published in 1897, has never been out of print and there have been countless adaptations on film and television and in comic books and in video games.

Probably the best and most frightening production was the notorious Orson Welles radio broadcast in America in 1938, presented as a series of news bulletins, interrupting a music programme.

It caused instant panic among listeners who real did think theinvasion from Mars was for real and took to their cars in large numbers.

In 2006 Wayne began touring a musical version and he has been touring large arenas ever since. The show re-invented now for thestage arrives in a theatre but it remains a hybrid, a concert with spectacular animation and video footage. It is never a West End musical.

The rock band and strings are on stage in two separate rising platforms Wayne stands between them and conducts. The music roars and thunders.

The cast includes David Essex, Jimmy Nail, Daniel Bedingfeld and Michael Praed. None of them registers.

The performance is very energetic, with blinding lights and flame; but Bob Thompson’s over busy production, a crazy circus show, is never scary.

In front of the band a large number of actors in Victorian costume run around, fall over and give each other lifts. It’s all pretty meaningless and no help to the story whatsoever. Liam Steel’s choreography should have been scrapped.

Liam Neeson takes on the role Richard Burton role had on thealbum as Narrator; but he is not there in person, only on film and hologram. The narrative line is so bad that for most of the time I hadn’t a clue what was going on and I was never once emotionally involved.

Have you seen the original drawings the Brazilian artist Henrique Avim Correa did for the novel? Now they are really scary.