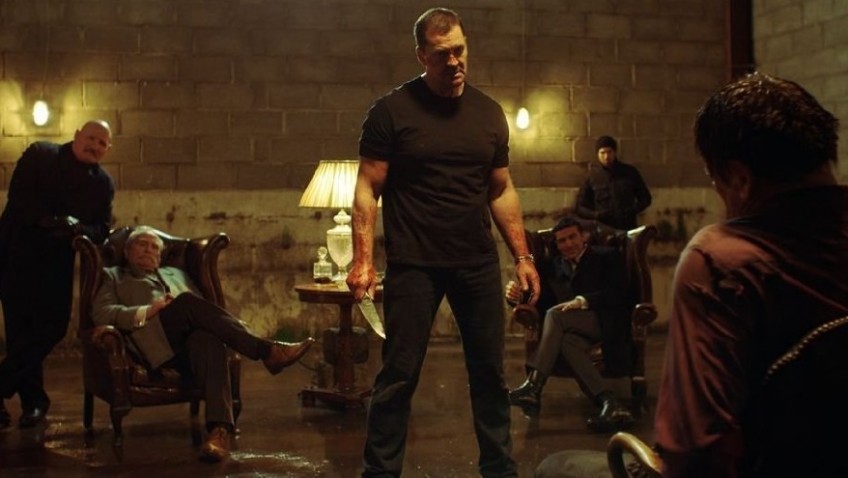 Breakdown is a violent drama Written and Directed by former Associate Producer (Love, Rosie) Jonnie Malachi about a contract killer’s struggle to free himself and his family from the grip of his crime syndicate.  As Malachi is a British Director, and this is first feature film, you wish there were something good to say about it.

Craig Fairbrass (Cliffhanger, Rise of the Food Soldier, TV’s Eastenders, 1999-2001) stars as ex-soldier Alfie Jennings, a contract killer working for Albert, a psychopath (James Cosmo, Braveheart, Highlander) who is called The Major by his sycophants, and Grandpa by Jennings’s teenage daughter Maya (Amanda Wass). Albert demands total loyalty and obedience 24/7 from his well-paid employees. The conflict arises when that is becoming a problem for Jennings.

You see, Jennings is suffering from visions. He sees his past victims and foresees his own wife and daughter covered in blood. Not very manly, and not the kind of thing you want clients to find out about, particularly in the middle of a torturing session. When Jennings confronts Albert with this professional liability, he gets threats, not sympathy. If that weren’t a problem enough, Jennings’s housewife Catherine (Olivia Grant) is fed up with his anti-social hours, not to mention his vocation.

An early scene shows Alfie teaching Maya how to shoot. They are in rural Essex where Grandpa has just given Maya a shotgun for her 16th birthday. Alfie leads her into the woods where she fells a beautiful buck with tall antlers. Alfie explains to Maya that he is doing this because, although he will always look after his little girl, it is important she learn how to protect herself. Just how killing a helpless deer (as opposed to practising in a target range) is going to help her protect herself is not explained.  As it happens, it is not big game the family has to worry about.

When Alfie and Maya return home from the ‘hunt’ they have to face Catherine. Although she seems to sit around their minimalist, spotlessly sterile villa with nothing more than a glass of wine to keep her occupied, Catherine, you suspect, is a closet member of the League against Cruel Sports.  Her stern reception puts a damper on the quality time father and daughter spent in the woods together. But Catherine has yet to get a taste of the real violence that threatens her family when Alfie tells Albert he wants out.

Malachi clearly has a fondness for Guy Ritchie and Quentin Tarantino. There is a prolonged and very violent torture sequence, shot in a cartoon fashion that plays out as more parody than homage.  Fairbrass acts and talks as though he were Jason Streatham, but it’s hard to feel sympathy for Jennings.  He might want out of his despicable job, but we never learn why he has been torturing people so skilfully without remorse for years.   Although he’s the only character you can possibly take seriously, the script is so unintentionally hilarious that there wasn’t a dry eye in the house.