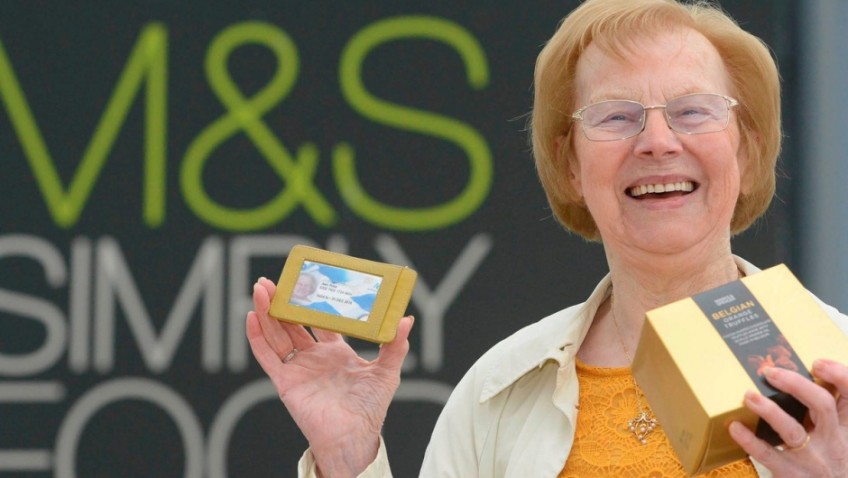 An pensioner who bought a bottle of wine was left puzzled when a cashier asked whether she was over 18 – for the first time in her life.

Jean Ross, 83, said she had never been asked her age when buying alcohol until she went to her local Marks & Spencer store last week.

The retired teacher burst out laughing when the cashier asked the question and her GP, who stood behind her in the queue, added “just a little bit”.

The widow said the tongue-in-cheek question asked at the store in Irvine, North Ayrshire, had been taken as a”compliment”. Jean, from Irvine, said: “I’ve never ever been asked for my age when buying any alcohol before, so this was a first for me.

“I was buying a box of chocolates and a bottle of wine to thank a couple for buying me lunch after my [laser eye] operation.

“I couldn’t stop laughing when she asked me. I’ve never been put in the position where I have had to prove how old I was in order to buy something.

“The girl behind the counter seemed serious but also looked at me in a way which said to me ‘I really don’t like doing this but I must ask your age.’

“I couldn’t believe it. I didn’t even answer her because I was laughing, which was when my GP chimed in and said ‘just a little bit’.

“I’m very fit fortunately and I suppose it was a compliment.

“I was thrilled to bits and it put a smile on my face for the rest of the week. I’ve been telling everybody in town about it.

“Everyone knows what happened now. It was awfully funny.”

Jean had been married for nearly 50 years to former local newspaper owner Charlie Ross until he sadly passed away on his birthday in October 2007.

But the evergreen widow, who was a champion runner in her youth, did not let the death of her husband get her down and has continued her active lifestyle into retirement.

She keeps herself busy with daily activities which include visiting friends, working with a local charity and long walks in Ayrshire.

A spokesman for Marks & Spencer described Jean’s encounter between Jean and the cashier as a “light-hearted moment”.

The chain’s stores operate a ‘Challenge 25’ scheme which encourages anyone who is over 18 but looks under 25 to carry acceptable ID if they wish to buy alcohol.

The spokesman said: “It is always nice to hear about light-hearted moments between our employees and customers.”