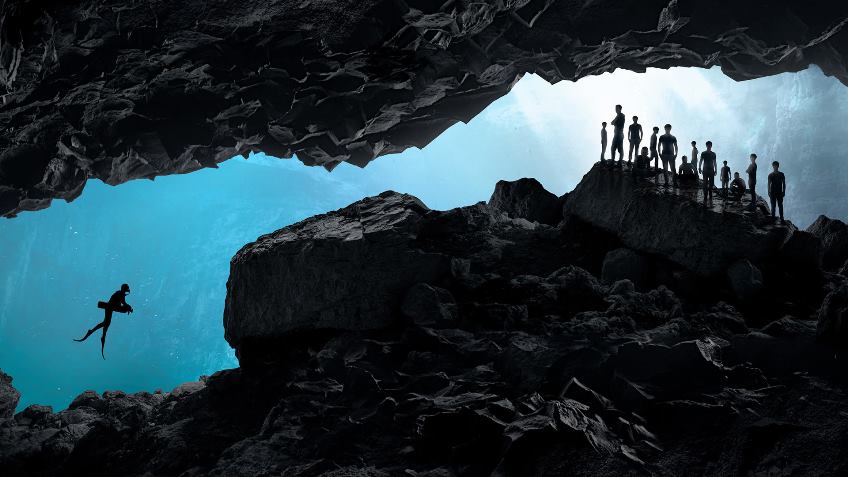 You knew it was coming – National Geographic’s gripping account of the Tham Luang Non cave rescue.

Even if you followed the television news from 23 June to 10 July 2018 when twelve Thai boys from the Wild Boars Football Team and their coach were trapped in a cave by early monsoon floods, you will be gripped by National Geographic’s behind-the-scenes story of this race-against-the-clock rescue. It is also an against-all-odds rescue, as you will see. The Thai government’s engineering operations to pump out huge quantities of dirty water are impressive, and the heroes are many. All are acknowledged by co-directors Elizabeth Chai Vasarhelyi and Jimmy Chin in their comprehensive account.

Foremost, perhaps, are two British cave divers, Rick Stanton (MBE GM), a retired firefighter and John Volanthen, an IT Consultant. When they arrived to an embarrassing public greeting at the airport it was pouring, and a Belgium electrician reported the current was so strong it ripped off his watch and, if he tilted his head, it would have ripped off his mask.

The young Thai Navy Seals were skeptical of these two middle-aged amateurs, but the duo were the first to find the boys after 10 days, huddled on a rock shelf, four kilometers from the mouth of the cave. They video recorded the proof-of-life for the hysterical parents and the cheering world, for the world was watching. But their heroism did not stop there. Finding the boys was, relatively speaking, the easy part.

While still looking for the boys, presumed dead, the duo heard screams and discovered four pump workers who had fallen asleep in Chamber 3 (the operations hub and future holding bay for the Navy Seals – 800 meters from the mouth of the cave) and missed the evacuation. It seems that they had been forgotten about!

This was a fortuitous encounter, not only because the British divers saved their lives, but because when the boys were found, Stanton realised they could not get them out without drugging them.

The four adult workers were attached to the two divers’ cylinders and shared their regulators to breathe, meaning they were very close, and being led blind under water. Breathing in this manner while being manoeuvred through a narrow cave is frightening even for a trained diver and if the Thai pump workers panicked, risking their lives, and the lives of the divers. If adults panicked during the relatively short journey, it would be impossible to expect the 11-16-year-olds to complete the several hour journey from where they were found.

Various plans – drilling through the mountain into the cave, pumping out all the water, and waiting until the end of the Monsoon season were discounted because of the growing urgency – depleting oxygen supplies.

Another hero, and the only known casualty, was Saman Gunan, a still-young, handsome retired Navy Seal whose widow describes his selflessness in tears. He died from a lack of oxygen while delivering oxygen tanks to the boys. One of the main reasons for the decision to remove the boys at the time, as opposed to waiting until the rain stopped and the cave drained, was that oxygen levels had already fallen from a reasonable 21% to the danger zone of 15%.

It was then that American Sergeant Derek P Anderson of the US Air Force European Command encouraged Stanton to think, “what if”, and the drugging idea went into action. Anderson is another hero for his ability to unite disparate parties under pressure; his excellent decision-making skills and his belief in the experience of the volunteers over the dozens of government forces, including the valiant, but unspecialised Thai Navy Seals.

This introduces us to the story’s only reluctant hero – without whom the rescue plan would have failed. The British divers call on an old acquaintance, Australian anesthesiologist, and amateur cave diver Dr Richard “Harry” Harris. After hearing Stanton’s plan, he initially refuses because he could lose his license and face criminal charges for acting against his own medical advice.

Eventually, Harris reluctantly accepts the risk and swims out to the rock shelf to anaesthetise each of the 13 victims before fitting the drooping heads with special U.S. masks and handing the boy over to one of an international team of divers who answered Stanton and Volanthen’s call. Harris says he ‘lied through his teeth’ reassuring the nervous divers during a crash course in administering interim doses during the long journey out.

And here tribute must be paid to the courageous boys themselves, who never complained, somehow kept smiling, and had full confidence in Harris and the foreign divers.

Coincidence and romance play a role, too, as Nurse Amp Bangngoen comes from Chiang Rai Province, where the Tham Luang Non cave is located. She had recently been on holiday in the USA where she was fixed up with Rick and with whom, she tells the camera, she had fallen in love. When Amp returns home and hears the news, she naturally calls on Rick to help.

Spirituality plays a role when, at the frantic mothers’ insistence, the mayor brings in revered Monk Kruba Boonchum. When, at one point, Stanton and Volanthen give up hope and start booking flights home, this Monk from Myanmar declares that the boys are alive and later blesses bracelets that the British duo carry to the boys with food parcels.