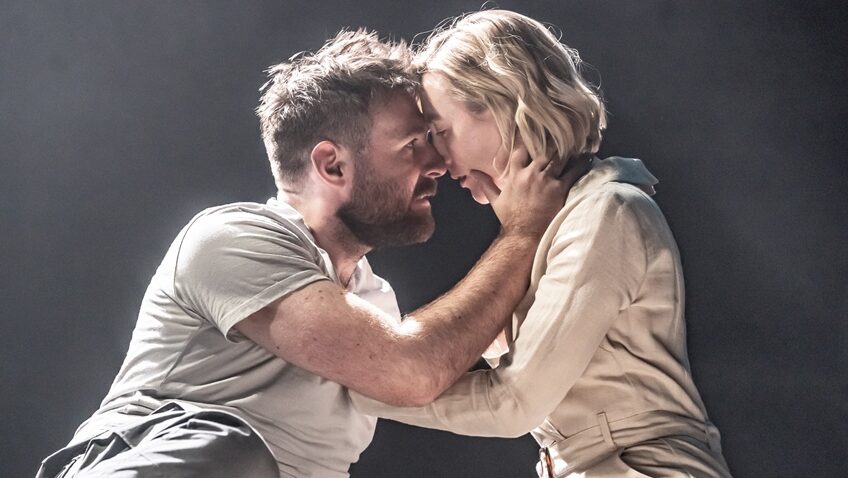 I watched Yael Farber’s murky, modern military production at home when it was streamed and was very impressed by the excellent camera work.

James McArdle’s Macbeth is not a man of ambition with dark and deep desires. He’s a decent soldier, shocked and in tears to discover that having committed murder, he will never have a night’s restful sleep again. Afflicted by terrible nightmares, he goes mad long before his wife does.

The interval in Farber’s production comes very early with the brutal murder of Banquo. The second part opens with Macbeth and Lady Macbeth at their coronation banquet, dancing to Vera Lynn singing We’ll Meet Again, an unexpected period touch and a joke the witches would surely appreciate.

The royal couple address their guests through a microphone which leads to one of McArdle’s high spots, when Macbeth comes face to face with the Ghost of Banquo and he becomes hysterical.

Saoirse Ronan’s Lady Macbeth wears a white jump suit and underplays the evil. A major innovation is to have her come to warn Lady McDuff that she and her children are about to be murdered; but she arrives too late and is traumatised by the brutal horror she witnesses.

The witches are not your hurly-burly hags but elderly Fates who sit, smirk and never speak in unison. They come to Macbeth whilst he is in bed, asleep, another nightmare.

There is no Porter to provide light relief; but there is a gentlewoman Cellist, Aoife Burke, to provide a running musical commentary. The whole cast remains on stage for much of the time which gives the production, a rehearsal feeling, and that is emphasised by the presence of a standing naked stage light. King Duncan (William Gaunt) in a wheelchair is the most Shakespearian character.

A major feature is a water tap, which is used so much to wash away guilt and blood that by the end of the play the whole stage is flooded with water. Macbeth and McDuff, splashing and fighting each other, are completely drenched.

In a coda, Yael Farber underlines that the play is a “churning, ever evolving, re-recurring tragedy” by repeating the same action she began with and emptying another wheelbarrow of its dead soldiers’ jackboots on to the stage.