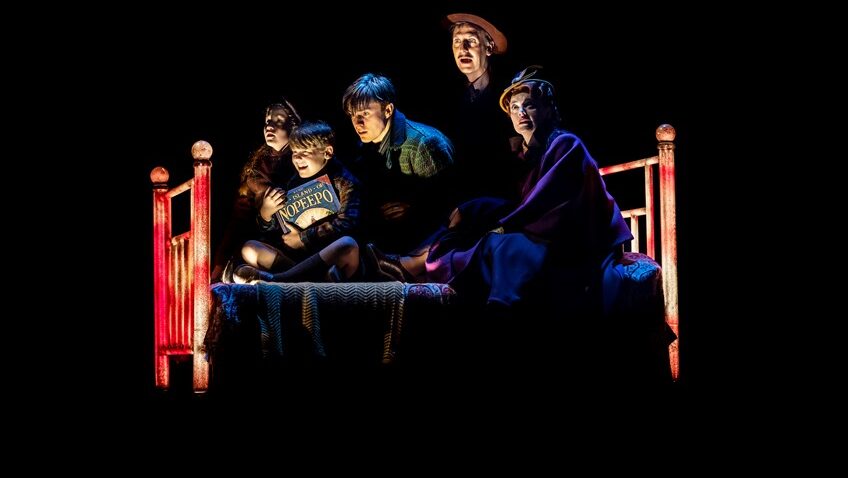 Bedknobs and Broomsticks has been a Disney film favourite since Angela Lansbury, David Tomlinson and children took to the air on a flying bed in 1971. Fifty years on, the story – and the bed – have, at last taken off onstage in a full-blown musical that’s now whizzing round the land.

Singing, dancing and magic spring up all along the way as fantasy adventures unfold when apprentice witch, Eglantine Price, reluctantly takes on three orphaned evacuees from war-torn London. Dianne Pilkington’s mature performance and fine singing create a credible, likeable Eglantine, firm, cool and reserved, yet ultimately fun-loving, warm and caring, while understudy Sam Lupton is a wonderfully engaging Emelius Browne, his singing voice, presence and delivery captivating as he transforms from fly-by-night charlatan magician into a responsible team player with self-belief. The younger children, Carrie and Paul, are more in that feisty, self-assured mode promoted amongst today’s kids rather than the wide-eyed, naive mode of children of yesteryear, while brother Charlie is a somewhat strange character concoction, being an awkward big-kid thirteen-year-old who dips into young Tommy Steele-chirpy-Cockney style which actually works nicely in a number like Negotiality, well sung by Conor O’Hara.

The superb musicianship of the orchestral players and the intricate subtleties and variety of Simon Hall’s orchestration are fabulous throughout, with exciting instrumental tones and textures from instruments that are more than double the number of players, as the musical journey takes us from percussive wartime London to glittering, undersea ballroom dances via all the different twists and turns of mood and atmosphere. The songs of the legendary Sherman Brothers (of Mary Poppins fame) are retained, supplemented by new ones from Neil Bartram, all providing buoyant numbers with moments of charm and sparkle, aided and abetted by strong singing all round.

The ubiquitous ensemble is magnificent. An army of diverse, resplendent individuals create characters that endlessly propel props and shift scenery (clouds, trees, doors, door-frames, bits of train or bombed building, furnishings, barrows, luminous fish – you name it!) while they dance, puppeteer and sing, in fabulous choral blend, anything from angelic strains to eerie spirit tones, lit with firefly lights. The ensemble’s Portobello Road is the top hit of the show, full of nicely choreographed movement, hearty song, magnificent colour and glorious costumes.

With an added emphasis on introspection and the importance of self-belief and of sticking together through times of trauma, Brian Hill’s plotline is, at times, somewhat unwieldy and potentially confusing, and with each act over an hour long, some children (and/or adults) may flag along the way, so spectacle, magic and illusions need to be good. While huge numbers of walk-on scenery and props are constantly on the move and beautifully lit starry skies and silhouette skylines likewise provide visual stimulation, Jamie Harrison, meanwhile, co-director with Candice Edmunds, is in charge of the numerous (times ten) magic tricks and illusions (as in Harry Potter and The Accursed Child), some having bigger impact than others. Changing a person into a rabbit – and back – phew! – is pretty cool in anyone’s eyes, and when self-propelled shoes and boots get walking, swords dance in the air, and bewitched broomstick or big, old bed with glowing bed-knob flies on high, no strings attached, it can’t fail to impress. For th
ose who adore puppets there’s a jaunty, big-mouthed fish, a bear, a lion and a gangly secretary bird, all brought to life by their actor/singer/manipulators.

The show may not entirely rivet and gel from start to finish but engaging main characters, talented ensemble, superbly played music, constant visual spectacle and impressive illusions make for an enjoyable time.