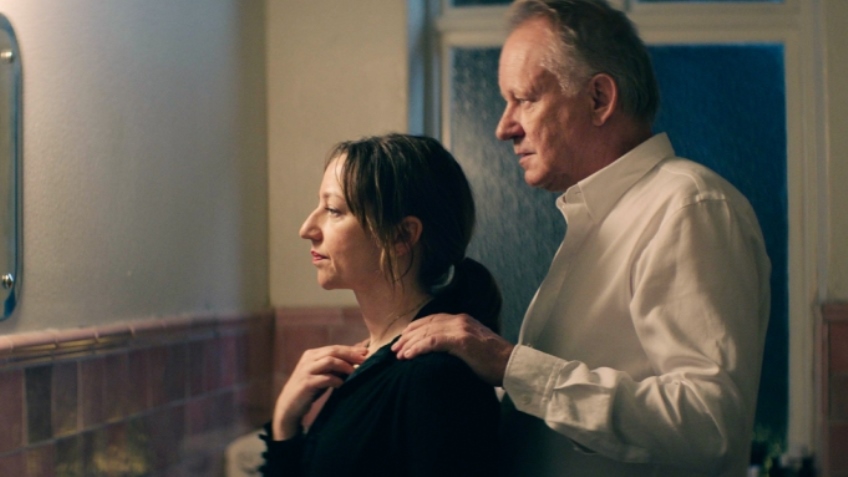 In films like The Hunt for Red October and Good Will Hunting you could picture Liam Neeson (now 69) in the roles played by Stellan Skarsgård (now 70) and to some extent – think Schindler’s List – it works the other way, too. Both men have the gravitas, the charisma, the atypical, good looks and the physical solidity and yet the tenderness to play leading men, superheroes, villains, teachers, diplomats and husbands. Though known more for his action films, in 2019’s Ordinary Love Neeson plays a husband struggling to cope with his wife’s cancer diagnosis. In Hope, writer-director Maria Sødahl gives Skarsgård the role, although the film belongs to his screen wife, Anja, in a no holds barred performance by Braein Hovig.

Both Ordinary Love and Hope focus on the reactions of the couple to the progress of the disease and medicine; the hospital scenes with medical discussions, conflicting prognoses, confusion and frustration, and the fear. Scenes feel so real that you suspect the writer has had first-hand experience.

And you would be correct. Sødahl begins her film with a voiceover, ‘This is my story, as I remember it.’ The ‘story’ she refers to, her diagnosis of brain cancer with months to live, explains the nine-year hiatus between her 2010 film Limbo, and this one.

Sødahl has given her couple a large family. Workaholic Tomas (Skarsgård) has three older children from a first marriage, who are stepchildren to much younger partner Anja (Hovig). Tomas and Anja never married but have their own beautiful children: two younger boys and an older teenage daughter.

Anja is a choreographer who has just returned to Oslo awaiting the reviews of her first production abroad. Her father, who lives with them, says he saw a review and points out, ‘it’s a huge deal.’ Anja cannot enjoy the acclaim and prospects of a stellar career.

She is distracted and annoyed. She has been feeling dizzy and she has fierce headaches. She comes home to find that her husband was not minding the children, but as her youngest son tells her, he ‘was working late, as usual.’

The film is structured chronologically with captions telling us exactly where we are in Anja’s saga, condensed over a 10-day period from the diagnosis on the day before Christmas to her birthday and wedding on 1 January, and the risky brain operation on 2 January. We learn that Anja had lung cancer (she used to smoke) but was given the all clear a year ago.

The settings are, with a few exceptions, restricted to hospitals and doctor’s offices and Anja and Tomas’ apartment. While spacious and comfortable, the apartment is well lived. There is no designer chic furniture and fittings, and we notice the clutter you would expect from a household with so many children.

The restricted, interior locations reflect the insular world the couple inhabit with the shock, fear and incomprehension making expanding their world impossible.

More than a medical procedural, Hope is the story of a relationship and how love is continually transformed. The cohabitation relationship is on shaky grounds, as we learn early on when Anja chastises her husband for ‘using the older kids as babysitters.’ They had an agreement that he was not going to work late when she was away. ‘I don’t work late when you are away’ she points out.

With Anja heavily medicated, the vomiting and nausea turn into compulsive eating to alleviate the effects of the drugs. And then another drug, to fight depression, results in mood swings that baffle everyone and prove embarrassing when others are around.

It is difficult to feel feminine let alone desirable in the circumstances, but Tomas remains at Anja’s side, trying his best in a journey she must take alone. ‘It isn’t always easy to help you,’ Tomas whispers, expressing this, and his helplessness.

Throughout their ordeal, the couple are seeking professional help in how to break the news to the children, with their diverse ages and personalities. They are told the specialists are away on holiday and Anja has to struggle to tell the children in their own way, as a group and individually. Tomas breaks the news to the grandfather.

There are many ifs, with various tests awaiting results. If the lung cancer has spread to the brain, the cancer is incurable. They can operate to remove the tumour to prolong her life by a few months, but the operation itself is risky.

In bed one night Anja tells Tomas to find someone new when she dies. ‘I don’t think the kids will make it with just you,’ she says more matter of factly than reproachfully. She also points out, ‘we’re useless at sticking together,’ but she does not want the children to remember them semi-estranged in their own apartment. She reminds him that his parents and hers had unhappy marriages which impacted on their lives.

When a cancellation results in a spot for surgery, Tomas asks the doctor if one can marry before an operation. Anja asks him, ‘is that a proposal? Tomas replies, ‘it feels right. It’s the only thing that feels right.’

The marriage, which must be squeezed in between December 28th and January 1st, a public holiday and Anja’s birthday, elicits conflicting emotions in Anja. The venues are so limited in the time frame that she rejects them while finding a dress is far from joyful. When Tomas joins her at the same hairdresser, she storms out of the salon, exploding with pent-up rage, ‘can’t I walk down the aisle without feeling it’s my funeral?’

While all of this rings true and engages us on an intellectual level, it never really engages us on an emotional level, at least not in the way that matches the roller-coaster ride the characters are subjected to. Perhaps it is slightly sentimental ending, the final shot, and the title, but the Hope feels more like a real-live chronicle than a satisfying drama. It is, however, a well-acted film that will strike a chord in the millions of families who have lived through cancer.