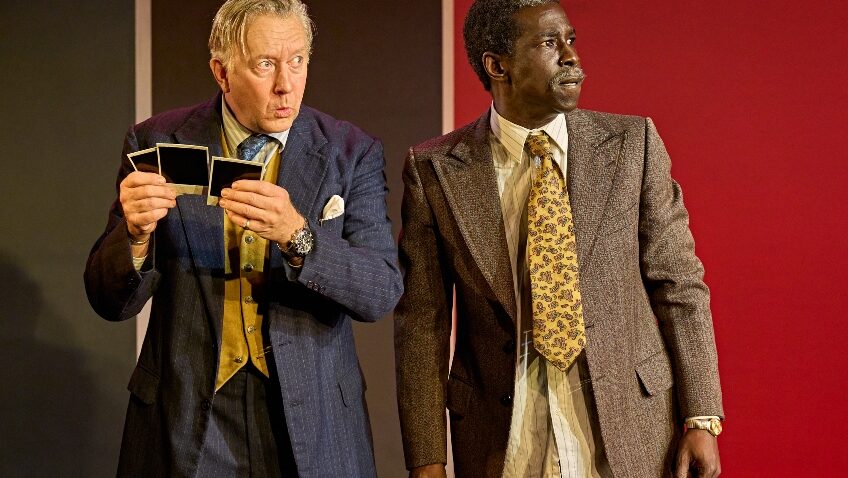 Alan Bennett’s comedy, which premiered in 1973 with Alec Guinness in the lead role, is described as “a filthy farce for a less enlightened age” and it is quite unlike anything else he has written.

The play, a strange mixture of vulgarity and literary pastiche, is full of quotations, poetry, doggerel, pantomime asides, songs and nods to Oscar Wilde, T S Eliot and Joe Orton.

There is no plot. The characters are stock. The dialogue and actions are as dirty as a seaside postcard by Donald McGill. Trousers are dropped and breasts are fondled.

The important thing, as Bennett always knew, was to get the actors on and off stage as quickly as possible. And that is exactly what Patrick Marber, the director, does.

The play is a fantasy of sex and mortality, of marriage and lust, of frustration and despair.

Jasper Britton is the very smug 53-year-old GP who is liable to be struck off the medical register at any moment. Catherine Russell is his sexually frustrated wife. Matthew Cottle is a celibate curate who wants to be at the forefront of Anglican sexuality and have some sex. Dan Starkey is particularly funny as the President of the British Medical Association, a little man with a big bluster.

The stage is bare; except for a coffin, a constant reminder that the play is much more than jokes about sexual misconducts. It’s also about the suspended sentence of death facing us all.

“Show me a human body and I’ll show you a cesspit,” says the GP. “The body is an empty vessel. The flesh is an awful cheat. The world is just an abattoir for our rotting lumps of meat.”

The unforgettable image from the original 1973 production was Alec Guinness’s own invention: a heart-stopping, little dance at the very end – a stop-start-stop-start-stop dance of death. Jasper Britton tries to run away; but Death quickly catches up with him.