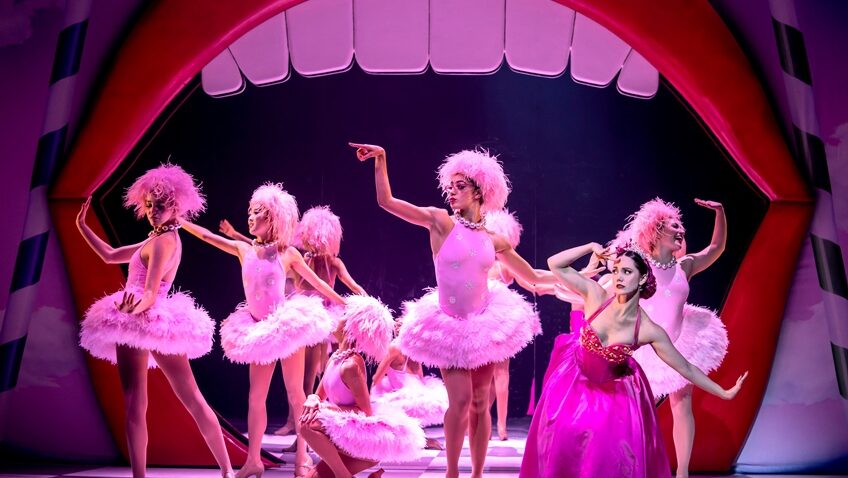 The Nutcracker! has long been a Christmas favourite, the ideal treat for little girls. It was not always so. The premiere in 1892 was badly received by the critics who disapproved of Tchaikovsky wasting his gorgeous music on such triviality. The public didn’t like it either, many of them leaving before the end. Nowadays there is hardly a ballet company in the world, which does not have a version.

The ballet is based on E.T.A. Hoffmann’s Nutcracker and Mouse King. A young girl is given a nutcracker doll for Christmas. She falls asleep and dreams she saves his life in a battle with mice. The nutcracker is transformed into a handsome prince who takes her to the Kingdom of Sweets where the Sugar Plum Fairy stages a grand divertissement.

The first act is all story; the second act is all dance. Matthew Bourne’s sweet and jokey version, like no other and now approaching its 30th birthday, has been given a fresh look and re-choreographed. Anthony Ward has rethought his costumes

The first act is set in a grey, cheerless dormitory of a Victorian orphanage run by a sadistic couple who were trained by Mr Squeers at Dotheboys Hall. There no battle between toy soldiers and mice; instead, the children stage a mini-revolution against their tormentors (which include the couple’s two horrible brats) and tie them up.

When the Nutcracker comes to life he has two transformations, first into a monster and then into a charming young man. In Sweetieland instead of the usual national dances, there are dances by confectionery in brash colours.

Liquorice Allsorts are camp flamenco dancers. The Marshmallows are fluffy, silly chorus girls. Knickerbocker Glory really does fancy himself. The Gobstoppers are biker yobbos in crash helmets. Everything in Sweetieland is edible. The whole cast give themselves a good licking.

The twin cupids are dressed in stripped pyjamas. The huge wedding cake, with the dancers arraigned on its various levels, is pure Busby Berkeley music. The big surprise comes right at the end, the ultimate happy ending, when the little girl finds the charming young man in her bed, every girl’s dream.

Matthew Bourne’s sweet and extremely colourful Nutcracker! is fun for the whole family.