Home / PROPERTY / Our travel writer Nigel Heath, who owned a property in France until quite recently, tells the tale of a tapestry. 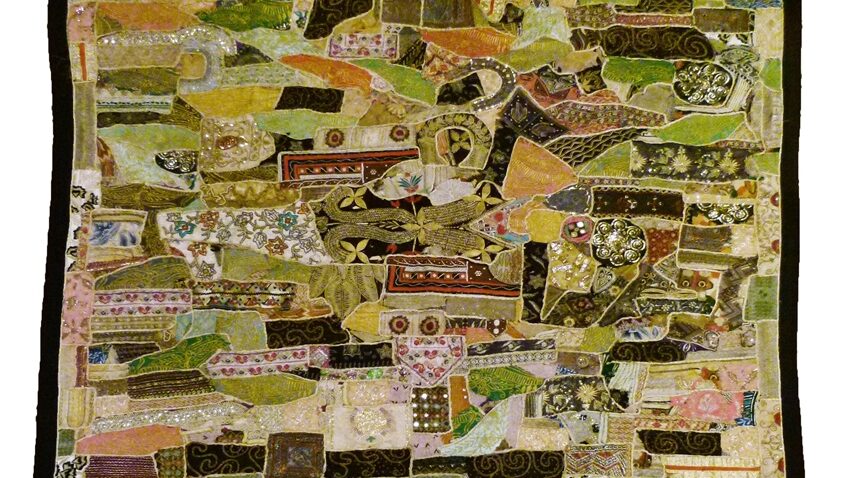 Our travel writer Nigel Heath, who owned a property in France until quite recently, tells the tale of a tapestry.

What an evocative word is “tapestry.”

One might look back over hopefully the rich and varied tapestry of one’s life or perhaps be reminded of one of the most famous of all tapestries, produced in Bayeux and telling the story of William Duke of Normandy’s conquest of England in 1066.

My wife Jenny and I made a diversion to this historic French town not long after we had acquired our holiday home in the picturesque village of Lassay Les Chateaux, set in a fold of low hills in the pais de loire region of Northern France.

But while looking at the amazing seventy-metre-long embroidered work of art, we could never have imagined that before that most memorable summer of 2008 was over, we would fall in love with a tapestry of our own.

We first arrived in Lassay to stay with friends, who had acquired their holiday home in the village some years earlier, and before the week was over, we had bought a three-story town house in a small lane just behind the square, plus a nearby barn and garden.

An elderly villager had lived in the property all her life and her mother before her and so it was in a terrible state of neglect, there even being an ancient wood-burning stove in the kitchen!

It took us three weeks of hard work to strip out the property, there even being lathe and plaster beneath the fading wallpaper on the stairwell, and then three years of solid hard work to transform it into a lovely holiday home.

When it came to furnishing our new home, then help was at hand thanks to vide greniers.

These are annual street sales held in cities, towns and villages all over France, allowing folk to empty their lofts and attics of unwanted items, a treasure-trove for those seeking to furnish a completely empty home in the local style.

Visiting these sales, plus Brocante’s, the English equivalent of second-hand or antique shops, on our days off also gave us the perfect opportunity of exploring and getting to know the surrounding area.

But our tapestry and some other wonderful treasures, were acquired much closer to home in Lassay and in another completely unexpected way.

“While wandering around the village with its typical square, gardens and a wonderful lakeside-chateaux, the oldest continually inhabited in France, we could not help noticing a beautiful old four-story house for sale.

It had balconied windows and was clearly built for someone of wealth and influence in the town in centuries past and on impulse we booked a viewing and when the agent unlocked the big front door, we stepped back in time.

It had a large central hallway with a magnificent grand staircase and to our surprise, most of the rooms were still elaborately furnished as if the previous occupant had just walked out one day.

The agent confirmed that the elderly owner had indeed moved to another part of the country and would not be returning so we asked if any of the furnishings might indeed be up for sale.

He suggested that if we cared to take some pictures of the items which interested us, then he would send them on to the owner and await her response.

So where on earth to start? We wandered from room to room with magpie eyes alighting on a host of objects de art and chose some magnificent large blue porcelain jugs and other smaller items.

There were also tapestry-like wall hangings everywhere and a particularly bright and colourful one caught our eye.

We forwarded the agent some pictures and a list of the items, including out tapestry, and to our surprise and delight the lady came back with the prices for the pieces she was prepared to part with.

We later collected our treasures and gave them pride of place around our newly restored holiday home but sadly our tapestry, measuring 230cm by 230cm, was just too large for its envisaged setting and there was nowhere else it could possibly go.

So, we brought it home with us because there was one place in our cottage we thought it might just fit, but again we were to be disappointed so instead of enjoying the light of day it has been folded away in a cupboard until recently.

Covid lockdowns and cumbersome travel restrictions brought a final end to our thirteen years French home owning odyssey and our holiday house was sold last autumn to a lady relocating from Paris.

Treasured memories of that time now live on in the favourite things we had packed up and delivered home to Wales but as far as our tapestry was concerned, we decided it was really time to bid it au revoir

It is going up for auction at Clevedon Salerooms in North Somerset on January 6th 2022 so hopefully someone somewhere will fall in love with it, as we once did, and allow it to see the light of day once more.