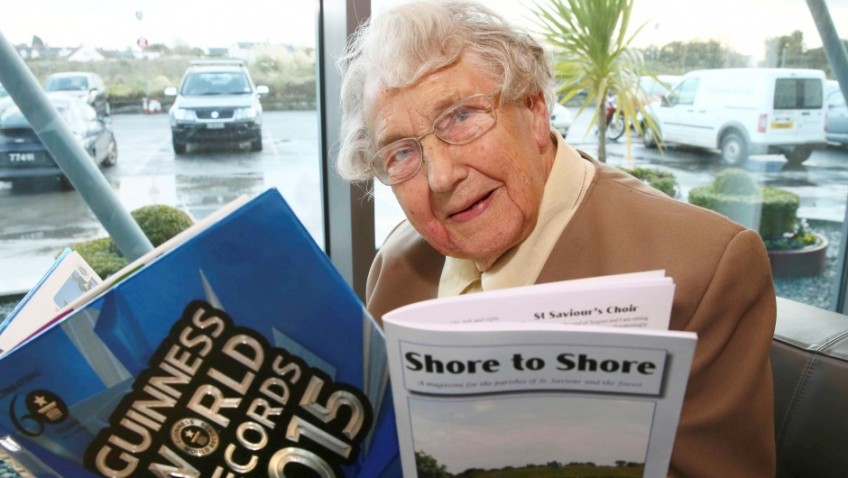 A dedicated great-grandmother has officially been recognised as the world oldest’s EDITOR – at the age of 95.

Lily Mauger has been in charge of Shore to Shore, a parish magazine in Guernsey, since its launch 16 years ago.

She has overseen more than 100 editions of the twice-monthly publication, including the latest which boasts articles such ‘Diary of a Very Elderly Senior Citizen’ and ‘A Recipe for Marzipan and Apricot Sponge’.

Shore to Shore was established in 1998 by the then-rector of St Saviour’s and the Forest, William Prescott, and has been sent to every house in the two parishes ever since.

When saddened readers learnt recently that it was due to be replaced by a larger magazine covering a wider area, they contacted Guinness World Records to see if Lily could be honoured in some way.

Guinness wrote back to say she was officially recognised as the world’s oldest editor-in-chief. 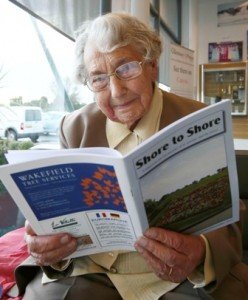 Lily, who has 14 grandchildren and 10 great-grandchildren, said: “A lot of people in the parish were not religious, or were people who had different faiths, so we had to find something suitable for everybody otherwise it would have been thrown in the bin.

“It got a lot of interest and people started to look forward to receiving it. I think it’s really a bit of fun. I can’t see I’ve done anything extraordinary at all.”

In 2005 the magazine was entered in a UK-wide competition, organised by the Association of Church Editors, and came second.

Lily put its success down to her tireless team of reporters and writers, including  original members Joan Ozanne, Renee Fitzgerald and Eileen Molineux, and Nancy Smith, who joined the team later in 2008.

She added: “We all work really well together and it was a real team effort.

“We also had wonderful contributors over the years who were absolutely brilliant at coming up with articles.

“As an editor it is so important that you listen to people and be interested in what they are doing.”

He said her editorship made Shore to Shore a ‘must-read’ for parishioners in their close-knit Channel Islands community.

Mr Dunlop said: “You wait with bated breath for it to come through the letterbox and of course now it won’t anymore.

“Lily is an inspiration to journalists of all ages. She was quite strict about articles and getting them off people but she is ferociously bright at 95 and doesn’t do anything she doesn’t want to do.”