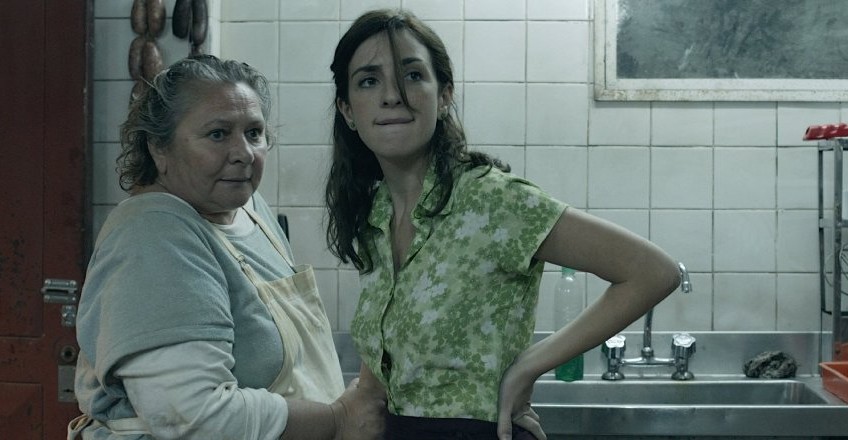 Wild Tales is revenge movie like you’ve never seen before. For one thing, it’s a dark comedy that is, when it is meant to be, funny. For another, it’s an anthology of six stand-alone, but thematically linked, stories that are equally  compelling– something that is very hard to pull off.

And finally, the characters enacting revenge are not mavericks, gunslingers, or superhuman heroes, but ordinary, flawed individuals who are suddenly pushed beyond human endurance by some actual or perceived injustice.  In a cathartic eruption that spreads to the audience, they break out of the cages of propriety into the jungle of barbarism.

The recent tragedy of the Lufthansa flight might put a damper on the first sequence set in an airplane. Screened before the real life crash to howls of laughter, the opening segment is similar in concept, if not in ‘plot’, to Pedro Almodóvar’s airplane-based comedy, “I’m So Excited,’ but is far more successful. This might not be a coincidence, as Almodóvar is one of the film’s producers. The opening turns the film into a cautionary tale as the characters’ actions lead to unpredictable consequences that they could never have imagined, and that most come to regret.

From the bright colours and humour of the first segment, the second film is set in an empty, truck stop off the motorway on a dark, rainy night.   A lone man enters the restaurant and is rude to a young waitress (Julieta Zylberberg) who suddenly turns pale.  She recognises the customer as the man who ruined her family and drove her father to suicide.  When she happens to mention this to the mysterious cook (Rita Cortese), the cook suggests they add poison to the man’s order.  The waitress is horrified at the idea, particularly when the man’s young son joins him for a bite to eat.

In another film, one of Argentina’s superstars, 58-year-old Richardo Darín (the star of the Academy Award winning, ‘The Secret in their Eyes’), plays a busy engineer and explosives expert who has had to put work before family life. That day, he is determined to be on time to his daughter’s birthday party and assures his wife that he will collect the birthday cake.  Unfortunately, over-zealous parking enforcement staff, a mountain of red tape and unresponsive customer service robots combine to change the course of fate.

Rich and entertaining as each of the stories is, Argentinean Writer/Director Damian Szifron seems to have something more up his sleeve, although he might argue that it is shear coincidence.   Like all of the arts, film is an art form with a history and the most original filmmakers emulate their predecessors just as they might inspire their followers.

In this way, each of the short films might well remind you of a feature film, Almodóvar’s ‘I’m so Excited’, being the first. Road rage is the theme of an intense two-hander starring Leonardo Sbaraglia that seems inspired by Steven Spielberg’s first theatrical feature film, Duel.  A battle of egos between two drivers of different social classes escalates out of control when the grisly driver of a grimy vehicle provokes a handsome, well-dressed motorist (Sbaraglia) when he prevents him from passing.

In another story, Oscar Martínez is superb as the millionaire father whose quiet negotiations with the family chauffeur to avoid his son’s imprisonment spiral out of control. This basic plot is almost identical to that of Turkish Director Nuri Bilge Ceylan’s dark drama, ‘Three Monkeys’.

The two films could not be more different in style and tone,  however, and Szifron treats us to a satisfying twist at the end. The film ends on a note of reconciliation with a segment that takes place at a lavish wedding party.  A pretty, but volatile bride (Erica Rivas) glimpses her husband flirting with a female friend at their wedding bash and retaliates in scenes reminiscent of a host of wedding disaster movies from Kill Bill Vol 1 and 2, to Carlos Saura’s film adaptation of Lorca’s Blood Wedding.

These and other film references aside, this is a fresh, cleverly directed and entertaining film from a talented writer/director who is not known in the UK, but, based on Wild Tales, should be.