Home / LIFESTYLE / REVIEWS > / FILM REVIEWS / A beautifully made and entertaining documentary about the famous House of Dior and the man who replaced John Galliano. 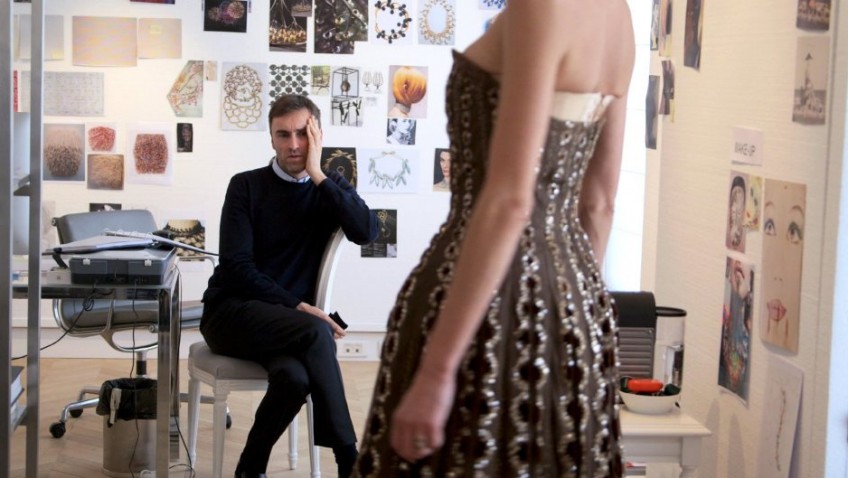 A beautifully made and entertaining documentary about the famous House of Dior and the man who replaced John Galliano.

Dior and I is arguably one of the most entertaining documentaries about haute couture ever made.  Frédéric Tcheng, who edits fashion commercials, is no stranger to fashion documentaries having worked on Valentino: The Last Emperor and co-directed Diana Vreeland: The Eye has to Travel.  In Dior and I, however, he is in full control as Producer, Writer and Director, a position that seems to have made Tcheng particularly sensitive to the apprehensive Raf Simons, the media-shy new Creative Director at Dior. The film combines a compelling behind-the-scenes look at the famous fashion house with the personal story of Dior’s unlikely new Creative Director: a man haunted by the spectre of the legendary founder.

Christian Dior is one of the last fashion houses to have its ateliers or workshops in house, in the classical building turned cultural landmark at 30 avenue Montaigne.   We meet several of the dedicated employees of the house, some of whom have worked for Dior for forty years. While most of the seamstresses are women, one good-humoured male ‘gets the big dresses’.   We learn that the ateliers are divided into the Atelier Tailleur (for suiting) and Atelier Flou (for dresses).

While most of the documentary is about Raf Simons’ challenging first season, the film follows the  dedicated Florence Chehet, the dynamic ‘Première’ or ‘First’ for the Atelier Flou and Monique Bailly, the ‘First’ of the Atelier Tailleur. Pieter Mulier, Simons’ more personable and diplomatic right hand man, explains that Monique is more anxious and apprehensive than Florence, ‘but she has golden hands.’  There is a wonderful moment when Simons, pressured by the upcoming show, lashes out at Florence for accompanying a saleswoman to New York City for a fitting.   Simons is told that customers paying the House’s steep prices are their lifeblood, and expect such treatment.

Most people do not realise that Christian Dior was 41 when, in 1946, he opened his own fashion house, and that he had only a decade to make his mark on the world before his untimely death at age 52.   The high profile John Galliano, who joined Dior as Creative Director in 1996, was sacked by the management in 2011 over his anti-Semitic tirade in a Paris bar. It is an interesting aside that while Dior made dresses for the Nazi wives during the war, his sister, Catherine fought for the resistance.  She was captured and sent to a German concentration camp in 1944, but survived, dying in 2008.

Raf Simons’ apprehension and self-doubts do not stem from following Galliano, but from the pressure of the tradition behind the House of Dior and the man himself. He reveals that he could not finish reading Christian Dior’s memoirs, Dior and I, because of what he calls uncanny parallels between Dior’s experience and his own.  In the film, Simons knows that he has to find his own voice and make his own mark on the fashion world while honouring the tradition that has made Dior famous.

To his credit, Tcheng shows us how Simons manages this. We see Simons combing the archives for inspiration while, for example, introducing experimental fabric and new designs based on the paintings of the American painter Sterling Ruby.  His idea to decorate the venue for the first show with walls of different kinds of flowers (a symbol of Dior) is a hit, but a controversially costly one.

Tcheng cleverly injects suspense into the documentary by highlighting Simons’ personal challenge and turning the film into a kind of triumph of the underdog story.  Simons is not, of course, an underdog, but he was not an obvious choice.   For one thing, a native of Antwerp, the Flemish/English speaking part of Belgium, he spoke little French when he joined in 2012.   He was known as a ‘minimalist’ –  a term that would not be applied to Dior or the more flamboyant Galliano.  Simons’ previous work was not in women’s fashion at all but in menswear, and, most surprisingly, he had never worked in haute couture.  We note, too, that while Simons love fine art, he does not draw his own designs.

The last minute frenzy of his first collection’s show, in which the seamstresses work Saturday nights and Sundays, making last minute alterations, is far from Simons’ experience.   Already under pressure from the owners and head of public relations to face the media in interviews and on the cat-walk, Simons is daunted by the fact that he has only two months to present his first collection.  He knows that the cat-walk show will attract the likes of fashion icon Anna Wintour, actress Jennifer Laurence and Sharon Stone and movie mogul Harvey Weinstein.  Those who like fashion shows will particularly enjoy the final twenty minutes of Dior and I.