Home / LIFESTYLE / REVIEWS > / THEATRE REVIEWS / Well, hello, Minnie, it’s so nice to have you back 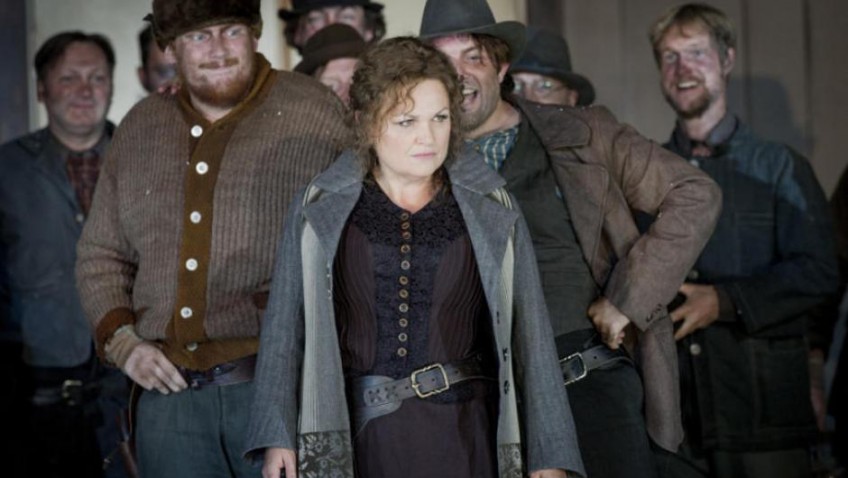 Well, hello, Minnie, it’s so nice to have you back

David Belasco, author of Madame Butterfly, premiered The Girl in the Golden West in 1905 but it was not seen by Puccini until 1907. The opera premiered in New York in 1910, conducted by Toscanini and starring Caruso and Emmy Destinn.

The last time ENO staged the opera was 50 years ago. I have not seen it since I saw it in 1978 at Covent Garden. Richard Jones’s production, with a fine cast headed by Susan Bullock as Minnie, Peter Auty as the bandit and Craig Colclough as the sheriff, is most welcome.

Belasco’s play, set during the Californian Gold Rush, is a classic example of the rubbish that used to pass for theatre in New York at the turn of the century and offers an anthology of Western cliché with a bandit who is redeemed by love and a crooked sheriff who lusts after the heroine.

Minnie, the heroine, a motherly saloon bar owner, gives bible classes to the drunken brawling miners. A log-cabin is cut off by a blizzard and there is a shoot out. There is a last minute rescue from the hangman’s noose.  The hero and heroine walk off into the sunset to begin a new life.

The second act with melodramatic excesses and absurdities is difficult to take seriously. There is a game of poker to see who – bandit or sheriff – gets Minnie.

Nothing in the first two acts prepares the audience for the brilliance of the third act when the opera moves on to a completely different level and Puccini soars.

Miriam Bluether’s design for the US Marshall’s Office sets the scene effectively. The music, conducted by Keri-Lynn Wilson, is urgent and dramatic. Sandra Bullock is in splendid form and the orchestra and the chorus, anticipating the lynching, are genuinely exciting.

The huge chorus (all armed with either pistols or rifles and liable to draw them at the slightest opportunity) are skilfully deployed by Richard Jones so they don’t look like a chorus.