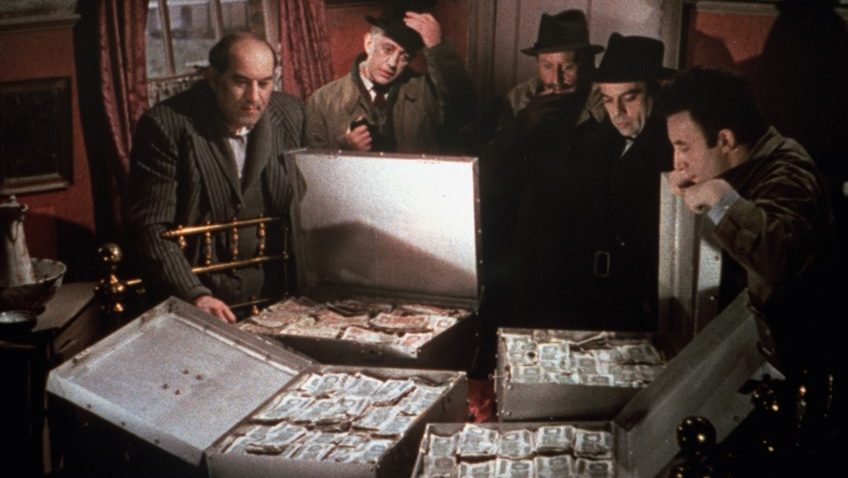 THE LADYKILLERS (StudioCanal). William Rose’s black comedy, much blacker than I had remembered, directed by Alexander Mackendrick, was the last of the much-loved Ealing Comedies of the 1950’s. The ladykillers were an incompetent gang of crooks who set up headquarters in an elderly widow’s quaint little house in St Pancras, masquerading as an amateur string quartet. Alec Guinness, with protruding teeth and ghoulish grin, played a mad professor, who looked like Kenneth Tynan and sounded like Alistair Sim. 87-year-old Katie Johnson won a BAFTA Award for her performance as the resolute widow who treated the gang as if they were naughty little boys.

I WAS MONTY’S DOUBLE (BBC iPlayer) is a record of one of World War II’s cheekiest and audacious bluffs, a monumental D-day hoax. In order to divert attention away from Europe, Monty went on an inspection tour of North Africa in 1944 – only it wasn’t Monty but an obscure Pay Corps officer impersonating him. The film engaged Clifton E James to recreate his wartime role. His likeness to Monty is so uncanny it is not difficult to believe he hoodwinked everybody. It’s a pity that the producers thought it necessary to add an absurd Boy’s Own fictional climax in which he is kidnapped by a German commando group and rescued by a two-man operation (John Mills and Bryan Forbes) with one machinegun between them.

E M FORSTER HIS LONG JOURNEY (Odyssey). This excellent documentary traces Forster’s development as a writer, alongside his recognition of his homosexuality. He lived in an age when homosexuality was a criminal offense and he remained in the closet. The documentary will send readers back to the novels, connect them once again with A Passage to India, Howard’s End, and give his most autobiographical, The Long Journey, the only major novel of his which has not been filmed, a new lease of life.