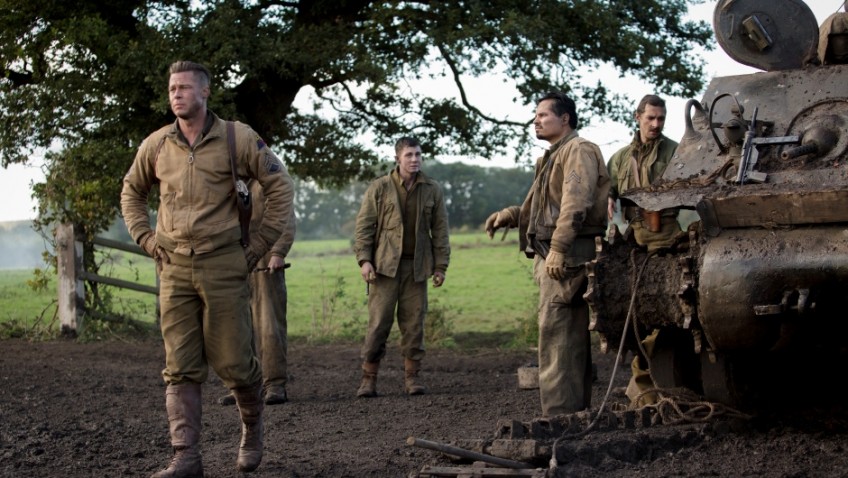 If you are wary of yet another World War II film in which a Hollywood superstar like Brad Pitt rides around in a tank killing faceless enemy soldiers to selflessly save the world, it is understandable.

Producer/Writer/Director David Ayer sets out to eliminate the stereotypes and breathe new life into the genre using the same raw, dark, macho ‘warts and all’ depictions of war that he applied to his LAPD cop-on-the-beat films, End of Watch, Training Day and Harsh Times.

Instead of putting us inside a patrol car, we spend two hours inside the eponymous tank, Fury.

Until the last thirty minutes, Ayer delivers a riveting film that rings truer than the Gunfight-at-the-O.K.-Corral shoot out that concludes the film.

Fury takes place in Germany April 1945, roughly the same time period and setting as Monuments Men; but the 66th Armor Regiment, 2nd Armored Division is not looking for plundered masterpieces.

Having begun their campaign in Africa five years earlier, they have fought their way through Italy, France and Belgium and are now making the final push to Berlin, blasting away remaining pockets of resistance.

When the action begins the men have just suffered their first casualty of the long campaign and, at an Army camp, are assigned a young replacement.  Norman Ellison (Logan Lerman, Noah, Percy Jackson films) protests that he ‘was trained to type 60 words per minute,’ as he is sent into the tank to clean out the blood and guts of the assistant driver/bow gunner he will be replacing. Norman emerges vomiting. ‘Do as you’re told and don’t get too close to anyone,’ are Collier’s instructions.

When the commander of the tank division is killed, Collier assumes command of the four remaining tanks. As they make their way through a devastated Germany, Ayer gives us glimpses of displaced villagers wandering like zombies along the muddy roads; an old woman eating the entrails of a dead horse; and Collier forcing the pacifist Norman to shoot a Germany soldier whose battalion had shown no mercy on dozens of US soldiers.

Perhaps nothing represents the dirty side of war better than the image of a pleading, defeated soldier holding up a photo of his family while being shot in the back.

Another side (quite literally when the camera holds a bit too long on his badly scarred back in a mirror) of Collier is shown in a tense scene in a village that the squadron is ordered to take.  After successfully quelling the resistance, Collier and Norman check out a flat in a quiet building for snipers.

There they find a woman of about forty Edith (Stella Stocker) and her pretty teenage cousin, Emma (Alicia von Rittberg).  Collier provides eggs for the starving women to cook and Norman plays the piano while the delighted and relieved Emma sings.  Collier sends the two young people into the bedroom as if he can foresee Emma’s fate.

Into this domestic scene storm the rest of the squadron who have just taken a woman into the tank for sex, suggesting the rape and plundering by US troops in Germany.  The men have become so dehumanised that they disrupt the meal, frightening the women until Collier threatens them.

After a disastrous ambush by a larger German tank, the Fury is all that remains of the division instructed to guard a strategic intersection. It is here that Ayer stages a long, set piece of bravado in a brilliantly directed, shot and acted scene that is nonetheless the least original or persuasive of the film.

Pitt gives a measured and authentic performance as Collier although Ayer and Pitt cannot resist indulging in noble heroics, perhaps to offset the image of the dirty war that has been established. For most of the film you forget that you are watching Brad Pitt and see instead a battle-hardened commander who really does believe that ‘this is the best job [he’s] ever had.’

Lerman makes an excellent foil and is strong enough to turn this movie of camaraderie into a generally unsentimental coming-of-age story with Collier as the mentor and father figure.