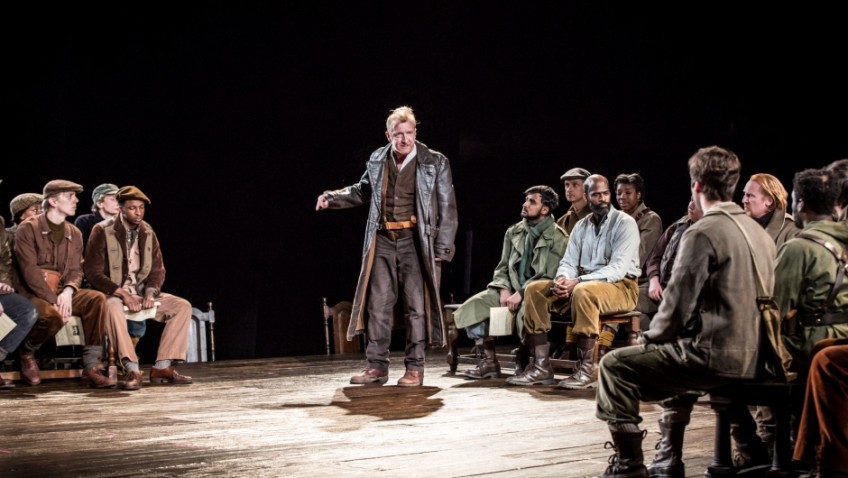 Are you voting on May 7?

The action takes place during the 1640s in England. King Charles 1 has been beheaded. The Civil War is over. It’s a time of social change and political upheaval.

Caryl Churchill’s play dates from 1976 and is revived to coincide with the General Election.

Sadly, it’s all debate and there is no play. It’s pretty hard work for actors and audiences alike.  Imagine and pity the non-speaking actors sitting there listening to the same speeches night after night.

When the docudrama was last staged there were just 6 actors. In Lyndsey Turner’s epic production there are well over 60, made up of professional actors and local community actors.

Es Devlin’s set is magnificent: Royalists sit at huge banquet table (with candelabra) and gorge themselves. It could be portrait by Van Dyck.

The table fills the whole stage and the cast act on top of it. After the interval the Puritans sit at the table, pre-occupied with paperwork.

There are three groups. The Levellers want votes and food for everybody, not just the rich.  Steffan Rhodri delivers a fine diatribe against the meat-eating rich.

The Diggers, who want communal property, start digging up the land, in this instance, literally plank by plank. The Ranters want free love. They believe nothing is sinful and expect the Second Coming very shortly

Churchill’s major set-piece is the edited version of The Putney Debates of 1647, which have been lifted from the original transcripts. Idealism and radicalism are crushed by Oliver Cromwell who wants the status quo.

I suspect many National Theatre regulars are going to be terribly bored. The one thing, the only thing, I really enjoyed was the beautiful hymn singing just before the end of the play.