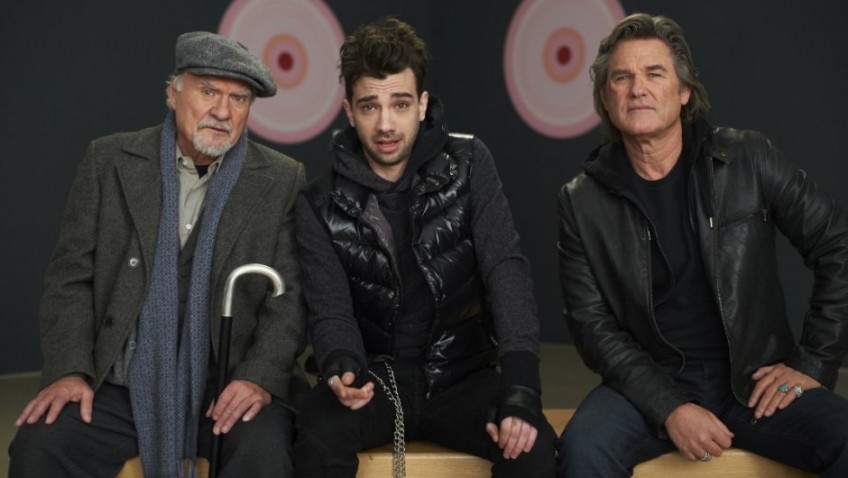 Canadian Writer/Director Jonathan Sobol’s sophomore feature, The Art of the Steal, is a heist movie, close enough in spirit to Ocean’s 11 to invite unfavourable comparisons with both the 1960 and 2001 versions.

The three essential ingredients of Heist movies: sharp buddy banter, tension or something at stake and characters we want to spend time with are missing from The Art of the Steal.  Despite the chance to see  Kurt Russell (63) and Matt Dillon (50), Terence Stamp (76) and Kenneth Welsh (72) trying to overcome the obstacles that stand between their dubious plans and the good life, you might prefer to spend your time admiring good forgeries at your local art museum.

The film acknowledges the cliché of the thief newly liberated from prison agreeing to pull off one last job.   It’s obvious to 50-something, part-time art thief Crunch Calhoun (Russell) that his days of eking out a living as a motorcycle daredevil à la Evel Knievel are over. He was always accident prone, but with age, the injuries take longer to heal.  With one last art theft he can retire with his girl friend (Katheryn Winnick) who is (naturally) half his age.

Egged on by his persuasive con artist brother Nicky (Matt Dillon), for whom he took the prison wrap, Crunch gets sucked into a daring and foolhardy, but potentially lucrative, plan to steal a rare book called the Gospel of St James. As we see at the beginning of the film, their modus operandi is to steal a work long enough to forge it, and then replace the forgery in the home/gallery/museum.  Stealing a rare book for resale, particularly one that no one has ever heard of, would have put off most thieves.

The film conforms to the heist genre as Calhoun recruits his team, each with their special skills.  Uncle Paddy (Welsh) has the under-world contacts, Nicky has the ingenious plan and Guy de Cornet (Chris Diamantopoulos) is the master forger who can, unbelievably, forge anything in record time.  Francie Tobin (Jay Baruchel) plays Calhoun’s devoted assistant, the younger brother or the son he should have had.

Sobol says that the genesis of The Art of the Steal was a ‘nugget of historical truth’ – the 1911 theft of the Mona Lisa by Louvre employee, Vincenzo Peruggia.  The more interesting nugget is that Picasso (who probably did nick some primitive statuettes) was suspected, but his best friend at the time, the critic and poet Guillaume Apollinaire, was arrested and spent a traumatic couple of days in prison.

Whatever the origin of the film, Sobol fails to make it fun and the talented actors struggle to engage us.  With the exception of Samuel Winter (Stamp), an art thief assisting Interpol for a reduced sentence, none of the men seem to care about or know about art. The twist at the end (the double, double crossing) is one not even Hercule Poirot could have guessed, despite the apparent ‘clues’ which the film reviews for our benefit.  It’s too little, too late.