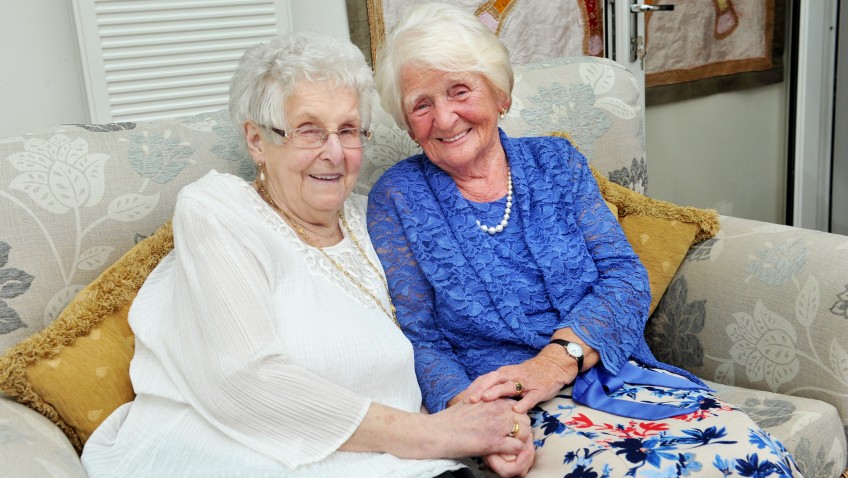 One of the UK’s oldest sets of twins celebrated their 90th birthday and put their longevity down to – TELEPATHY.

Devoted sisters Jean Hocknell and Joan Keeling were born an hour and 15 minutes apart and were inseparable throughout their child and teenage years.

They lived through the Second World War and have seen a whopping 19 Prime Ministers in power during their long lives.

The pair were brought up at the family home in the Ball Green, Stoke-on-Trent, Staffs., and Jean still lives in the village.

But first-born Joan moved to Oxford in 1975 and now lives in Polruan, Cornwall.

They keep in touch by phone every day and Joan still visits and stays with her sister.

On Saturday (27/1) the pair were joined by dozens of relatives from across the UK to celebrate the occasion at the home of Jean’s daughter Gillian in Biddulph, Staffs.

Mum-of-two Joan, who has four grandchildren and two great-grandchildren, said yesterday (Mon) “It is fantastic to be here celebrating our 90th birthday and I can’t quite believe it.

“I only visit Ball Green maybe once a year so it is a special occasion to be back.

“We’ve had a lot of laughs together, and I speak with Jean on the phone every day.

“I’m positive there’s a link between us. I can tell how she is just talking to her for a few seconds and occasionally we do finish each other’s sentences. It is almost telepathic.”

The twins were brought up as Methodists by their parents Rose and Jim Ryles, Joan and

In their teens they enjoyed ballroom dancing at the Ball Green Workingmen’s Club.

Joan worked for dinnerware manufacturer Royal Doulton and Jean was a dinner lady for more than two decades.

Jean is also a mother-of-two and has four grandchildren and one great-grandchild.

She said: “It is beautiful to all be here together to celebrate our birthday.

“We’ve both been very happy, even though Joan can be a cheeky one at times.

“Our mum didn’t know she was having twins when we were born. Once Joan had been born the doctor told her there was another one – our dad then asked if there were anymore.

“I really do think we have a special connection as twins. If I ever cut my finger when I was younger, a few days later Joan would cut hers.

“We used to love knitting together. During the war we made helmets, mittens and scarves for the soldiers.”

Joan’s son Ian Keeling, 55, from Polruan, said: “We were all here for their eightieth and the same people are here again.

“It is amazing to see the effort everyone has made coming from all over the country.”