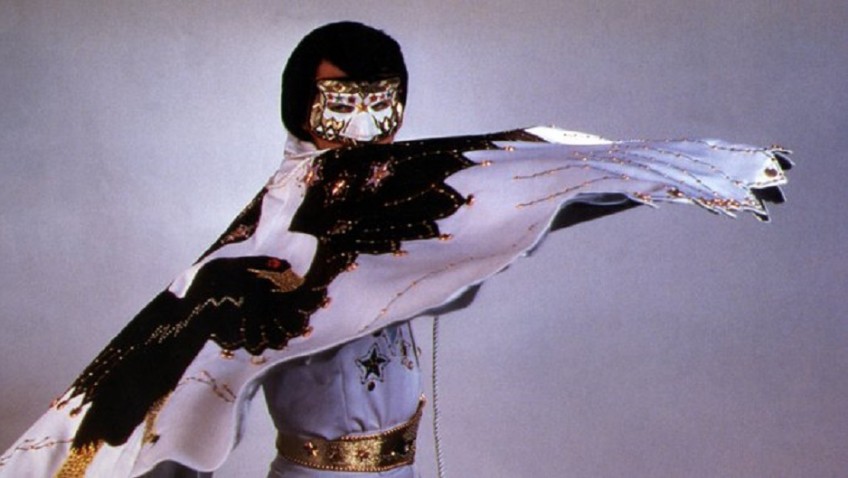 Truth really is stranger than fiction.

Joyce Glasser reviews Orion: The Man who would be King

British director/producer Jeanie Finlay’s 2013 documentary, The Great Hip Hop Hoax was a thought-provoking story about two musician friends from Dundee who used a hoax to pursue a dream that almost came true.  With Orion: The Man who would be King, Finlay travels to America’s South to tell a similar, but even more eccentric and tragic story about the man who sang like Elvis Presley.

Jimmy Hughes Bell was adopted by a couple from Orrville, Alabama (just south of Selma) named Ellis and lived as Jimmy Ellis.  From the many people who knew Jimmy and who appear on camera, including a few of the many women in his life, we learn that Jimmy’s voice attracted crowds from an early age and  people always asked him to sing.  Capricorn Records had offered an under-aged Jimmy a singing contract but his parents would not let him sign. After a brief stint in college sport, he worked for his family training Tennessee Walking Horses. Then in 1964, he sold all his horse gear and, after a disappointing stint in LA, returned to the Southeast where he was introduced to Shelby Singleton.  Singleton had bought Sun Records, with its Elvis connection, from the legendary Sam Philips and moved it to Nashville.

Singleton was amazed when he heard Ellis: he sounded exactly like Elvis Presley.  Ironically – and it was the tragedy of Jimmy’s life – to sound like Elvis was more of a curse than a blessing.  But on August 16, 1977 Presley died and instead of being a copy cat singer, Ellis was poised to be the King reincarnated.

A Georgia writer named Gail Brewer Giorgio published a novel about Orion, the world’s biggest rock star, who fakes his own death to escape the pressure of fame.  Songs in the book were written by Georgia songwriter of the year, Carol Halupke (who died in 2011).  By a coincidence, Halupe went to a night club where she saw and heard Jimmy Ellis and was stunned by his magnetism and, of course, by that voice.  According to Giorgio, she sent the idea to Shelby Singleton who had his own designs on Ellis.  Sun Records, with its rich archive of performances, released a 1978 album called ‘Duets’, that featured classic songs re-mixed in the form of duets with various stars and, unbeknown to many, the voice of Jimmy Ellis as Elvis Presley.  With Presley’s recent death, the album flew off the shelves.

Singleton jumped at the idea of putting Jimmy on stage as Orion, but Singleton insisted Jimmy wear a mask whenever he appeared in public to keep the mystery alive. The mask allowed obsessed fans and dreamers that modicum of hope that Elvis lived.  The album accompanying the tour, which was naturally entitled ‘Reborn’, featured Jimmy in his mask on the cover and on the reverse of the album, an unauthorised copy of the prologue of Giorgio’s book. She claimed she never sued as she wanted Ellis to be successful.

The Orion subterfuge thrived from 1979 until 1983 when Jimmy, who was becoming increasingly fed up with the mask and with remaining anonymous, removed it at a concert, in breach of concert.  In truth, the mystery was wearing thin by 1983, but Jimmy removed the mask because, like Orion, he felt trapped within a fame that he could never claim as his own.  According to Jimmy’s son, the record industry is full of sharks and his father, who ‘trusted everybody’, was cheated so much that he never made much money from the sold out gigs or the nine albums he recorded.

One of the band members tells us that when Sun Records was behind the tour circuit, they made good money.  Either Jimmy was denied royalties from the albums or he did not put his money aside, for in 1998 tragedy struck after he, his ex-wife Elaine and a business partner set up a pawn shop.

As with the Great Hip Hop Hoax, Findlay turns her documentary into a drama full of humour, pathos, empathy and tragedy (without relying on any re-enactments).  She also leaves us with an intriguing explanation of how Jimmy Ellis could sing exactly like Elvis Presley.  Jimmy was, like Elvis, who was 10 years his senior, born in Mississippi, and like Elvis, Jimmy’s mother’s name was Gladys.  There was no father’s name on the adoption record but there is a startling resemblance between Jimmy, middle-aged, and Vernon Presley, Elvis’ father.  In 1945, Vernon was in Tupelo, Mississippi, a 4.5 hour drive from Pascagoula where Jimmy was born in February of that year.