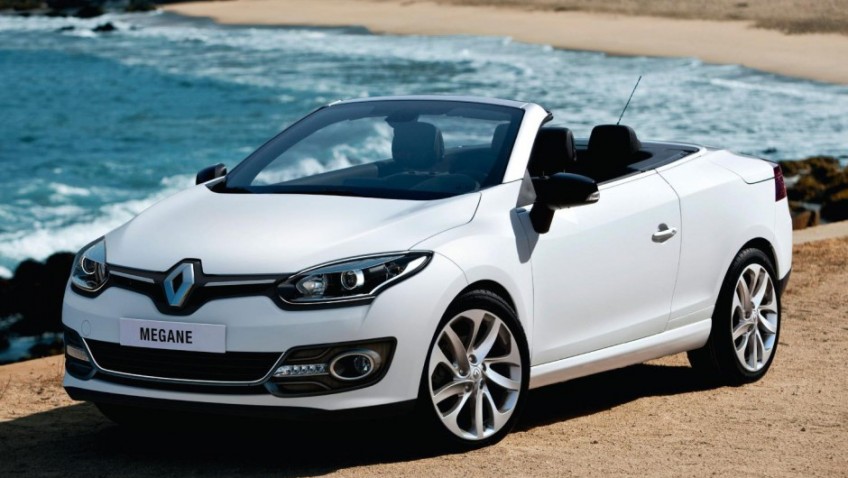 It’s a strange thing, but expressed as a percentage of total car sales, British buyers go for more convertibles than just about any other country.

Now 2014 has been an exceptional summer so far, but the definition of a British summer as ‘two fine days and a thunderstorm’ is still usually fairly exact. So why on earth do we do it?

The main reason just has to be modern convertible design. Gone are the days of wrestling to raise a canvas hood for five minutes, and half an hour later grimly motoring along in pouring rain because you can’t be bothered to go through the reverse process. I’m sure many readers will have owned a convertible in their early motoring lives, and the memories will be tinged with the exasperation they suffered at the time. I owned a Triumph TR6 for a couple of years in the mid-seventies, when it was still a current model, and the memories of flapping, ill-fitting, leaking canvas are exceeded only by those of its unreliability.

For enthusiasts of the model I have to admit that mine started as a pretty nasty example, and was only slightly better when I eventually sold it.

These days the hood of a convertible is almost always electrically powered, so raising or lowering it is simply a matter of pressing and holding a button for ten to twenty seconds. And for those who fear that a canvas roof is just too much temptation to the less honest members of society there are loads of metal roofed examples; watching one of these do its folding thing is a lesson in mechanical ingenuity.

I’ve been driving three of the most popular convertibles, though it’s fair to say there are many other models which are worthy of attention if the idea of open top motoring appeals to you. The Renault Megane CC (coupé convertible) is a four-seat motor that offers good value for money when compared to some of the pricier competition. This is a solid roofed machine, but unusually the bulk of that roof is glass, so its a bright interior whether the hood is up or down.

Power choice is a wee 1200cc petrol engine, and two diesels, the larger of which, a 1.6, was our test car; this comes in 130PS form, so it was an impressively speedy motor. The Megane in all its forms is a typical Renault, which is to say that it’s built for comfort, and most would say there’s nothing wrong with that.

Suspension is fairly soft, and allied to seats that hold one firmly but comfortably it’s a pleasant environment in which to enjoy the spacious views of passing scenery. All models are well equipped, so parking sensors are standard on even the base one, which is a mighty good thing as the view to rear and rear quarters isn’t great with the hood up.

Fold it down (which requires only a finger on a button for twenty seconds or so), and the view is of course mightily enhanced.

This is a four seat car, but don’t imagine your adult friends will thank you for the experience. Lack of leg room in the rear seats means that these really are just for children, unless the front seat occupants are prepared to put their seats about as far forward as they’ll go.

You can’t cheat here – and for the sake of that glass roof’s surface nor would you want to. A retractable blind in the boot illustrates how much space the roof will need, and if you can’t position that blind above your luggage the system won’t allow you to open up the roof.

On road the dCi 130 engine is remarkably refined, actually quieter than some petrol engines, which speaks volumes for the quality of top diesels today, and the very fact that Renault offer a choice of two in their CC range illustrates the current popularity of diesel propulsion.

Fuel economy is of course one very good reason for that. The 1.2 petrol’s official combined fuel figure is 44.1mpg. Compare that to the 64.2 of the dCi 130, and you can see why this one is so popular. Our next test was of a soft topped convertible – the Volkswagen Golf Cabriolet. It’s a smaller car than the Megane, so you’d expect less luggage and passenger space. But when you think about the volume required for a folded soft top compared to that of the hard top, the result is not so clear cut.

The actual volume of the Golf Cabriolet’s boot is 250 litres (8.8 cubic feet) with hood up or down, and that’s more than the Megane offers with its roof down; fold it back up however, and the Megane figure is 67% larger than the Golf’s.

Engine choice for the Golf Cabriolet is wide, with petrol engines from 1.2 to 2-litres, and diesels of 1.6 or 2-litres. Ours was the 2-litre diesel, which with manual gearbox boasts a combined fuel figure of 62.8mpg, and this from a car with a 0-60 time of less than ten seconds.

One very good reason for the impressively low fuel consumption is the high gearing; in top gear there’s an indicated 40mph per thousand revs, which means there’s also very little engine noise to disturb your drive.

This really is a great car to drive, hood up or down, and changing from one mode to the other is as quick as it gets. Around twelve seconds sees the car converted from open to closed or vice versa, and it looks good either way.

Chopping off a car’s roof as you’d expect lessens the structural integrity, and if nothing else was done then the rest of the body would bend alarmingly as it tried to cope with Britain’s bump and pothole-filled roads.

So cabriolet manufacturers have to add extra strengthening, hence weight, to restore the status quo, which is why convertibles often feel a touch ponderous. The Golf Cabriolet doesn’t; it feels as taut as the standard Golf, and with the 2-litre diesel it has a true sports car feel.

There are compromises of course, but boot space and rear seat leg room are better than most, and this car is smaller than your average hard roofed example; it’s 24cm shorter than the Megane for instance.

German cars have traditionally been built on the firm side: stiff suspension and hard seats. Ignoring those preconceptions I found the Golf Cabriolet to be commendably comfortable, with suspension that mopped up the worst of our troubled surfaces, and seats that you sit ‘in’, rather than ‘on’.

Having said which, the car is nonetheless a very sturdy machine, with typical Volkswagen solidity; close the doors, and you can hear the build quality. The final test machine was another soft top, the Audi A3 Cabriolet. Folding its roof is once again a simple matter of pressing a button; eighteen seconds later you have an open top motor, and a really good looking one at that.

You don’t even have to stop to do it, for the system will perform at speeds of up to 31mph. Most passengers will appreciate the attention to detail that sees a few degrees automatically added to the cabin temperature setting as soon as the roof is lowered; reversed of course when the rain comes and roof must once more be raised.

For Audi, the words ‘cabriolet’ and ‘convertible’ mean a fabric roof, which is naturally likely to be noisier than a metal one, so Audi has had to work hard to make the A3’s cabin as insulated from wind and road noise as it’s possible to be. Indeed they provide two versions of the roof, the quieter of which – fitted to ‘Sport’ and ‘S Line’ versions as standard (optional on SE versions) – has a three-layer inner padding which I can confirm makes the car almost as quiet as the A3 hatchback. Colour choice for the roof is black, grey or brown, with black or silver interior lining.

There’s bags of room in either of the front seats, but noticeably less in the rear ones (yes this is another four seater); certainly adults sampling the rear seats will be making loud noises to those up front until they move well forward. As for luggage space there’s 320 litres, and 275 with the hood down.

Engine choice is 2-litre diesel, and 1.4 or 1.8 petrol. The 1.4 petrol is fitted with ‘Cylinder on Demand’ technology, which shuts down two of the engine’s four cylinders when throttle demands are small.

You don’t feel or hear it happening, but you might notice it when filling the tank, because the CoD version boasts a combined fuel figure of 56.5mpg. Good, but not as impressive as the diesel’s 67.3. Very sensibly Audi offers a choice of suspension systems at no extra cost, so you can have the ride quality that suits you; everything from very firm to, well, fairly firm. Everyone wants their car to look good, but convertible buyers are understandably very keen to have not one, but two good looking motors – one for fine weather and one for the dull stuff. The A3 Cabriolet in my opinion scores well on both counts.

The range of cabriolets available here in the UK is impressive, and the above three are all practical four seater cars that suit the British climate perfectly, in that they convert to open-top mode in twenty seconds or less. They’re well equipped, and despite the lack of a permanent roof, they’re very safe.

Occupant safety in an accident is of course harder to achieve in a car with no metal protecting your head should the car roll over. To minimise the effects of that unwanted drama, all three of our test cars here have an active rollover protection system that should the worst happen will shoot solid bars upwards in a small fraction of a second to become the equivalent of the roll bars used on race and rally cars.

So in short, you can have safety, performance, economy and comfort, in a winter body and in a summer one; two cars in one. Any one of these three really is a case of having your cake and eating it.