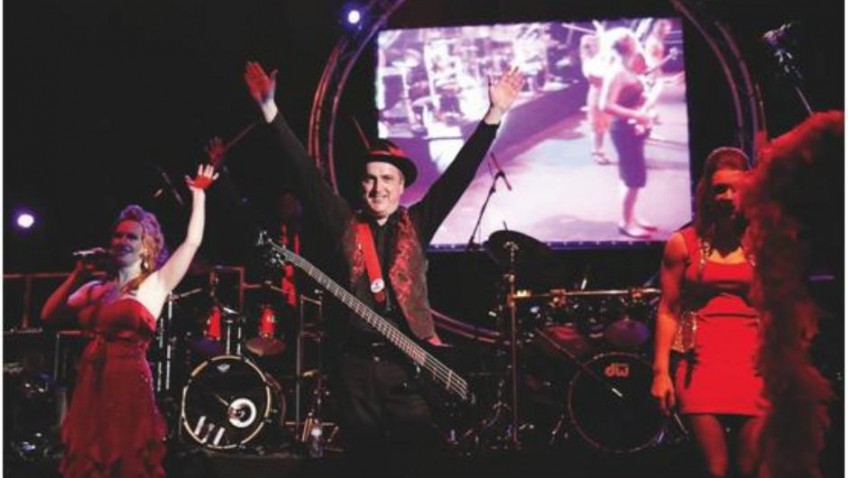 An IT consultant who swapped his keyboard for a guitar due to a midlife crisis has achieved his dream – by headlining a rock gig at the Hammersmith Apollo.

Ian Penfold decided against buying a Porsche or having a makeover as he approached his 50th birthday.

Instead, the dad-of-two dreamed up the plan of hiring out the iconic Hammersmith Apollo and performing in front of 2,000 people with his band, Hidden Agenda.

He would be following in the footsteps of global names such as Bob Dylan, Eric Clapton, Iron Maiden, Blondie and Selena Gomez.

But it was going to be an uphill task for Ian, with his disco tribute act only normally playing in front of around 100 people.

He spent two years planning and organising the event and faced the prospect of a huge financial loss if his dream failed.

It costs £12,000 to hire the venue and on top of this Ian and Hidden Agenda would have to pay for all of the lighting, sound and cost of publicising the event.

Despite never having done anything like this before, the band managed to sell more than 1,600 tickets at £18 each before giving around 400 to charities to give away.

He said: “My 50th birthday was on the horizon and I wanted to do something special, and slightly silly. “So in May 2012 I approached the Apollo and they were super helpful.

“I asked the manager if anyone had done this before and he just gave me a look, but I saw this as a challenge and it spurred me on.

“When you hire out the Apollo, you simply get an empty room. You have to sort out the sound, the lighting, the tickets and promotion. It took over mine and my wife Janet’s lives.

“I didn’t have £26,000 to lose so it was a big risk but we took a leap of faith and managed to break even which was a real achievement.”

After the warm-up acts, Ian and the rest of Hidden Agenda went out on stage to perform in front of the 2,000 spectators.

Miffy Scally and Alana Warner were the singers, Angela Neil was on sax, Patrick Moore on guitar, Rob Hodgkinson on keyboards, Colin Bibby on drums and Ian on bass.

They opened up with ‘Rock That’, by Earth, Wind and Fire and played classics like ‘Car Wash’ by Rose Royce and ‘Superstition’ by Stevie Wonder.

The gig finished with a standing ovation as the group thrashed out ‘Hot Stuff’ by Donna Summer.

“Seeing my name in lights outside was really special. Strangely, when it got to the performance I was really relaxed about it.

“There was a huge build-up but it ended up going really well. Everyone was up on their feet dancing.

“The biggest thing was the organisation, going out there and performing felt like the easy thing. I went out on stage and the crowd sang Happy Birthday and then I played.

“It was a fantastic feeling, although I’m not sure I’d do it again too soon.”

Have you got a burning ambition you’d like to achieve, if so we’d really like to hear from you about yours?  Please contact us at editorial@maturetimes.co.uk.  Ed