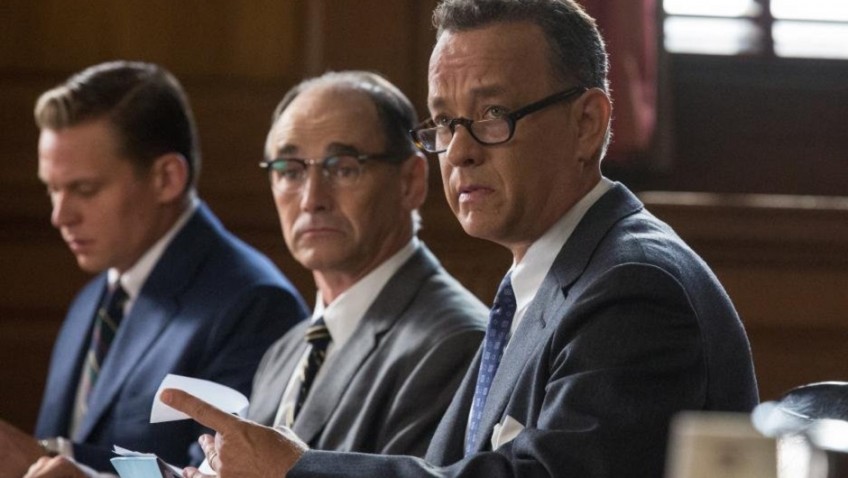 BRIDGE OF SPIES (20th Century Fox Home Entertainment).What do you do with a Russian spy when you have caught him? Shoot him! His lawyer argues that he would be much more useful alive as a bargaining tool. And so it happens when an American pilot is caught by the Russians. Steven Spielberg’s superior, complex intellectual spy thriller is based on a true story in the Cold War era (1957). The lawyer negotiates the exchange of prisoners just as the infamous Wall is going up in Berlin. The best part of the film is the legal aspect where the lawyer upholds the Constitution that the Russian has the right to a fair trial. Tom Hanks is the pragmatic lawyer. Mark Rylance is the enigmatic spy. Their scenes, a vivid contrast in acting styles, make for compelling drama. Rylance won an Oscar for Best Supporting Actor.

TANGERINE (Metrodome). Hell hath no fury like a transgender hooker (Kitana Kiki Rodriguez) who discovers her boyfriend/pimp (James Ransone) has been unfaithful to her whilst she has been in prison. With the aid of her best friend (Mya Taylor) she sets out to find who it is. Sean S Baker’s comic-sad drama (fluidly shot on Iphone –though you would never guess) captures the lives and camaraderie of the prostitutes on the block in LA waiting for drivers, such as the Armenian taxi-driver (Karmen Karagulian) who pick them up and take them to a car-wash for a quickie. The film has bags of gritty, raucous, spontaneous energy and Rodriguez and Taylor in their hyperactive film debuts clearly have talent.

THE MISSING POSTMAN (BBC) is a simple, sentimental very British TV film dating from 1997 which will resonate with many people who are about to retire and thinking of leaving their loved-ones. A postman (James Bolam) in a small seaside town is made redundant at 52. He decides to take some royal mail with him and deliver it by hand. He is perused by the police (Jim Carter) and the media who think he is making some political statement about machines doing men’s jobs. The nation rallies behind him. What the film is actually saying is that life is not a dress rehearsal and if you are not happy with your lot, you had better do something about it now. Mark Wallington’s adaptation of his novel won the Best BBC Comedy Drama Award.

THE FALL OF THE KRAYS (Signature). Zachary Adler’s sequel to his The Rise of the Krays is another low-budget film walking in the shadow of the Tom Hardy film, Legend. Kevin Leslie (Ronnie) and Simon Scott (psychopathic Reggie) are once again playing the notorious, murderous gangster twins who were finally nailed in 1969 when they were 34 and sentenced to 30 years imprisonment. You may feel that there have been more than enough films about the Krays recently. Adler takes it all far too ponderously; the script isn’t good enough and their gayness is kept under wraps. Simon Scott is somewhat sidelined. Kevin Leslie and Phil Dunstar (as Ronnie’s right-hand man) take centre screen. (Dunster was so good on stage in the war play, Pink Mist, about post-traumatic stress disorder.)

CULLODEN is the 1964 Peter Watkins’ reconstruction of the brutal and mishandled musket and bayonet battle of 1746 between the British and Scottish rebels and the inhumanity in victory. This remarkable anti-war film, groundbreaking in its day, holds up well. The cast are amateurs, their faces well chosen. The newsreel mock-documentary approach with hand-held camera and direct interviews does not spare the viewer either the horrors of the battle or the horrors of the aftermath when the Brits butcher the rebels. The wounded rebels and their wives and children were executed, hung, burned and raped. The Scottish highlanders were treated as cattle; it was one of the worst atrocities ever in the British army. Charles Stuart (Bonnie Prince Charlie) is no bonnie romantic figure.

THE WAR GAME. I am not surprised that Peter Watkins 1965 anti-nuclear war documentary was banned by the BBC for 20 years. The true facts – Civil Defence was totally inadequate – were too horrifying for broadcasting and might compromise national security. Watkins’s newsreels show nuclear war in three stages: 1) the emergency period involves a full scale civilian evacuation of 10 million and compulsory billeting. 2) there is only three-minute warning when a missile is on its way. 3) the aftermath of the burning, blinding firestorms and the constant exposure to radiation. The facts are stomach-churning. Watkins’s career in the UK never recovered from the furore.