Home / LIFESTYLE / REVIEWS > / FILM REVIEWS / Todd Phillips and Jonah Hill turn War Dogs into more fun than it should be. 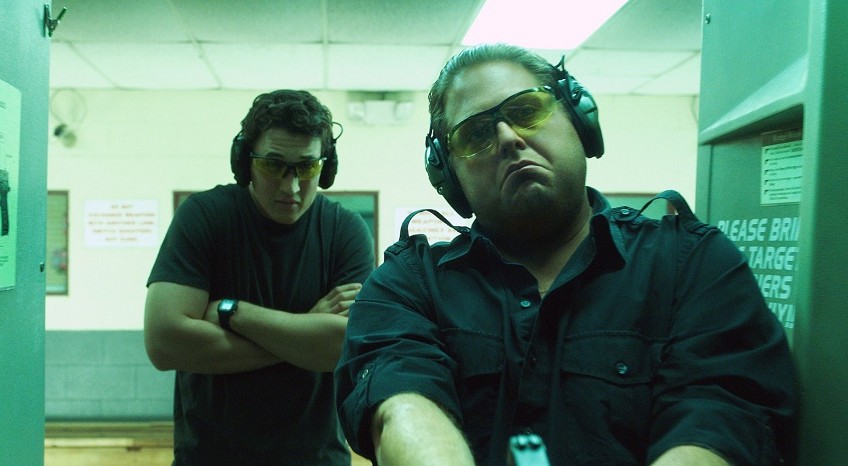 Todd Phillips and Jonah Hill turn War Dogs into more fun than it should be.

Cinema owes a debt to the creativity of the US military and its law enforcement agencies.   They have inadvertently provided filmmakers with hours of raw material in real life cat and mouse pursuits (The Wolf of Wall Street, Catch Me if You Can) and in surreal schemes.  Who can forget the CIA’s plan to fake a Sci-Fi film production to rescue hostages from Tehran (Argos) or the FBI’s idea to use a pair of low-life hustlers and FBI agents dressed as Arab Sheiks to expose corrupt politicians (American Hustle)? Now comedy director Todd Phillips (The Hangover) has a go with War Dogs, an uncomfortably entertaining biographical drama about the unintended consequences of the Bush government’s military procurement policies.

The script, co-written by Phillips with Stephen Chin and Jason Smilovic, is based on Guy Lawson’s Rolling Stone article and book, Arms and the Dudes, referring to the drug smoking/snorting habits of the two protagonists: Efraim Diveroli (a very heavy Jonah Hill) and David Packouz (Miles Teller).  Packouz, who is now ‘pursuing a music career’, was not only a consultant on the film, but he can be seen playing the guitar in the nursing home where his screen persona (Teller) is trying to flog expensive sheets to incontinent patients.  If the story is told from Packouz’s point of view it could be because Diveroli has recently completed a four-year prison term for fraud, and has his own, very different, version of events.

When Miami native Diveroli, (19) bumps into his old school friend Dave Packouz (23) in 2005, Diveroli had already been working for his family in the procurement business since the age of 16. He has recently started up his own business, AEY, Inc., to bid for small job-lots on the US military website.

As Diveroli explains to his newfound friend, the Bush administration had to outsource an increasing number of its military operations to supply troops in both Afghanistan and Iraq.  Federal contracting rules became lax as the budget soared by $245 billion.   When Bush came under criticism for lining the pockets of the usual suspects such as Raytheon and Lockheed Martin, the bidding was opened up to smaller contractors.

And when this happened, the Diverolis of the world made it their business to learn the system.   Although Diveroli comes from a family of Orthodox Jews, the film makes it clear that the only thing he worshipped was money.  Packouz is more balanced. He has, in the film at least, a beautiful, newly pregnant girlfriend, named Iz (portrayed by the ironically named Ana de Armas, ‘Armas’ meaning ‘weapons’ in Spanish) and two jobs. While investing in bed-linen, Packouz is making the not unsubstantial sum of $75/hour as a licensed masseur. He has to reflect on Diveroli’s far more lucrative job offer, however, since both he and Iz are pacifists.  Diveroli is a master salesman, reassuring his friend: ‘This isn’t being pro-war; it’s being pro-money.’   Diveroli tells Packouz that he works alone as he has difficulty finding people he can trust.  Given Diveroli’s many betrayals later in the film, this line, almost tossed off as a cliché, takes on an ironic significance.

Packouz decides to keep his exploits a secret from Iz, although by the time they move into an immense penthouse duplex flat with ocean views next door to Diveroli, she has a rough idea of his new line of work.

While there are scenes in which the duo celebrate their newfound wealth with parties, drugs and new cars, the filmmakers do not let the film slide into a Wolf of Wall Street (in which Hill co-starred) tribute to unbridled sex, drugs and obscene materialism.  Instead, Phillips focuses on the work and risks, which provide all the cinematic fodder he needs. Along with the two Miami colleagues, we are driven deeper into the dangerous, corrupt, sleazy and, at times, euphoric, world of arms dealing.

The film is at its best when the pair are gun running from Jordon to Bagdad to deliver a shipment of guns that had been stopped at the border.  A call to Miami from the army general in Iraq threatening to ruin AEY’s reputation spurs them into ‘the Triangle of Death’ to deliver the goods. Their driver, ‘the best smuggler in Jordon’, stops to steal gas at a deserted station and their truck comes under attack by Taliban militia.  ‘Fallujah, bad,’ the driver tells the alarmed friends.  ‘What the hell! Diveroli screams. ‘We stopped for gas in Fallujah?’

The bulk of the film focuses on AEY’s biggest challenge, a $300 million contract to supply ammunition for AK-47s for Afghanistan.  Here is where Jonah Hill’s tremendous performance turns from unsettling to frightening.  Diveroli turns into a sociopath and the film turns into a sobering morality tale.

The logistics of supplying such a major contract almost defeats AEY, until the pair meet an internationally outlawed, Albania-based broker (Bradley Cooper, who co-produced the film) who points them to warehouses in Albania where dirt-cheap surplus Soviet-supplied ammunition is collecting dust in warehouses across the country.   The initial euphoria at winning the contract turns into a nightmare, however, when the pair learn that all but the box of ammunition they tested is Chinese and substandard, and banned by the US Military rules.  When Diveroli’s greed gets the better of him and he tries to cut out the broker (in real life, the Swiss arms dealer Heinrich Thomet), the punishment is swift and brutal.

The film is surprisingly true to real life and it feels very convincing.   We do not long for a documentary to satisfy our curiosity as in so many ‘true’ stories.  The big change, however, is rather disconcerting, particularly as the film is told from the point of view of Packouz as a first-person narrator.   When AEY won the contract and set up an office in Albania, it was not Packouz, but another friend of Diveroli from Miami’s central synagogue, Alex Podrizki, who is despatched there.

The one other area in which the film has to trade off authenticity for entertainment is in the portrayal of the two main characters.  There is nothing humorous or likeable about any of the characters in the film, least of all Diveroli and Packouz.  Humour, affable actors and Packouz’s, ‘I was lost’ first-person narrative, and sweet girlfriend and baby are Hollywood’s ruses for turning villains into anti-heroes. In the film’s favour, however, in the end both Packouz and the US government learned a valuable lesson from the AEY scandal.