Smartphones seem to be the thing to have these days with touch screen technology being second nature to many of us. *Offcom has reported that the proportion of UK adults with a smartphone in 2014 was 62%. However that figure falls significantly to 20% when we look at the number of over 65s using a smartphone. That’s perhaps not too surprising as for most over 65’s this type of technology is very new and most smartphones can be confusing however old we are.

The Doro Liberto 825 is a very accessible Android smartphone and is especially suitable for those who are not so techno- savvy and who would benefit from a more simple and easy to use phone. The large buttons and clear screen lay-out also make the phone suitable for those with visual impairments and as it works with hearing aids is very useful for those with hearing problems. All to often getting a phone out of the box can be as tricky as setting it up, especially if the user is suffering from a loss of dexterity but this packaging has been well designed making it easy to get at the phone. 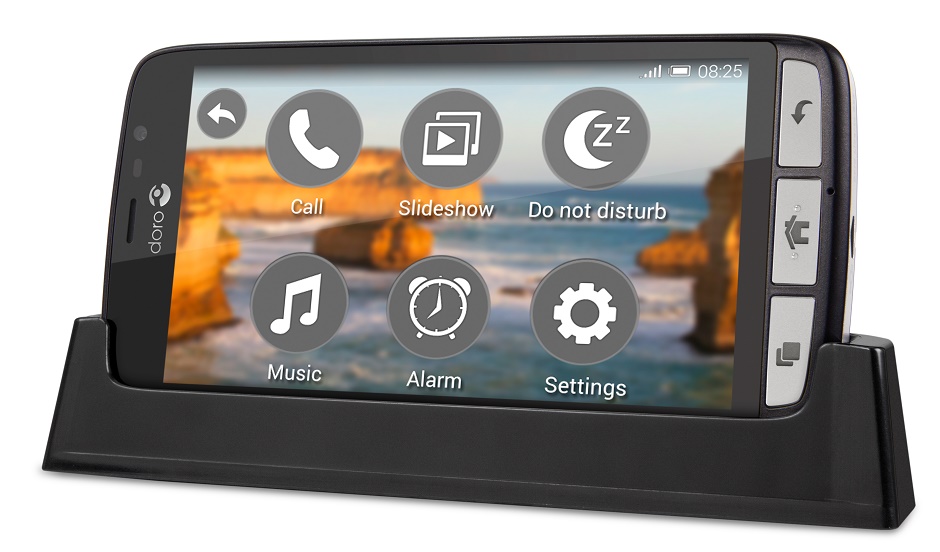 Many smartphones assume that the user has a certain level of knowledge or familiarity with such devices but Doro have gone a long way to making the set-up process as straightforward and simple as possible. The on-screen prompts and questions guide you through the process easily, with instructions being very clear and simple. Even my techno-phobic husband managed to go through the set-up process painlessly.

The phone itself has a large 4.5inch screen, which makes for easy viewing – especially when using the Internet. The buttons on the front are large and clearly marked. The on/off switch and volume control are on the right-hand edge of the phone and again are clearly marked and user friendly. The phone is good to look at, light to hold and feels robust. Navigation is easy and straightforward.

The phone comes with a number of useful functions: a charging dock, ear-phones, a built-in easy to use camera; an alarm function, FM radio and an assistance button for use in an emergency. It offers much the same features as other smartphones, including swipe screen functionality and the ability to connect to 4G networks. The dock can be used for charging the phone and it also triggers a special mode that has some extra features such as an alarm clock. On test the battery lasted just over 28 hours before needing to be re-charged.

Whilst all the functions are covered in the set up process and the phone does come with a quick reference guide, the downside is that the more detailed User Manual is not provided. This has to be downloaded from the Doro website and so if you do not have access to a computer you’d need to ask a relative or friend to do this for you.

All in all this is a very user-friendly smartphone that is especially suited to those who feel more comfortable with a simple layout – whatever their age!