Home / LIFESTYLE / REVIEWS > / FILM REVIEWS / Thekla Reuten’s strong performance as a drug dealer’s wife out to save her family, cannot save this film 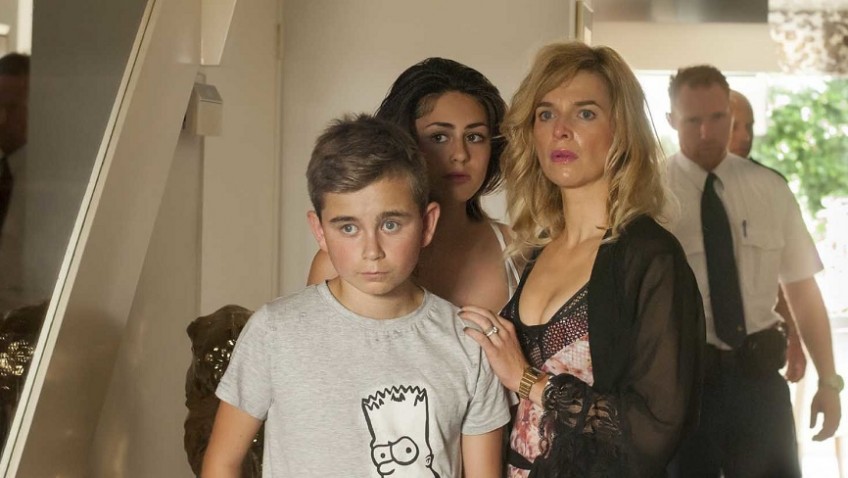 Thekla Reuten’s strong performance as a drug dealer’s wife out to save her family, cannot save this film

Tjebbo Penning’s Dutch gangster film distinguishes itself from a raft of European drug-related, violent crime movies by focusing on Sylvia (Thekla Reuten), the long-suffering wife of middle-man drug-dealer Eddie Kronenberg (Jeroen van Koningsbrugge).  Eddie loves his wife and two children, but he has a problem. He is not only caught between his unforgiving boss, Belgium competitors and a pair of detectives at his heels, but he’s a psychopath who can’t keep a friend.  While Reuten gives a convincing performance as a woman forced to admit that her husband is a violent thug, you have to wonder what took her so long.

Sylvia comes across as your typical ganger’s moll, wearing expensive, but always a tad vulgar, brand clothing, providing the best for her two good-looking children (Bente Fokkens and Nino den Brave).  Sylvia turns a blind eye to her husband’s job because she wants to believe that he is only saving up to buy them a beach bar to run as a legit business.  But when the police show up with a search warrant while Sylvia scrambles to get rid of blood clogging the toilet, it is difficult to hope for a fairy tale ending.

Not only is Eddie in too deep, but he’s dumb enough to tell Sylvia that he bought her the beach club, when he hasn’t.  That isn’t the last straw, however.  Eddie has never raised a hand to her or the children, and, difficult as it is to believe, she really loves the guy.  It’s only when the daughter, Daphne (Fokkens), witnesses her dad beat up a man and confronts her mother that Sylvia announces, ‘Your father sells drug.’

Daphne then asks the million pound question: ‘What do you do?’  Struggling to answer, Sylvia replies, ‘Nothing’, and then: ‘I look after you two.’

But with Yuri nearly assassinated in Eddie’s car, Sylvia realises that she is not looking after her children.  At last she resolves to disappear with the kids and steals a bag full of illicit cash to fund their departure.   Leaving Eddie, however, is more difficult than it is for your average battered woman because Eddie’s boss is afraid Sylvia will talk and is putting the pressure on Eddie to find her.

If Penning and co-writer Carl Joos had used their imaginations, they could have turned Clean Hands into something akin to the brilliant Scandinavian dark comedy/thriller Headhunters, in which a height-conscious recruitment executive turns to art theft, believing that his marriage to a gorgeous model is contingent on their luxurious lifestyle.  Instead, the filmmakers let the story play out like a woman in jeopardy TV movie, and, by making Eddie your typical violent drug dealer, make it impossible to empathise with him.  Penning even denies us the satisfaction of watching Sylvia use her wits to save her children in an entertaining manner.